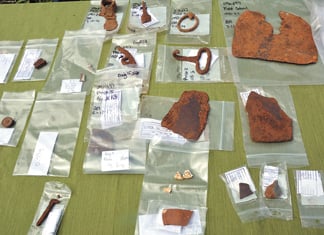 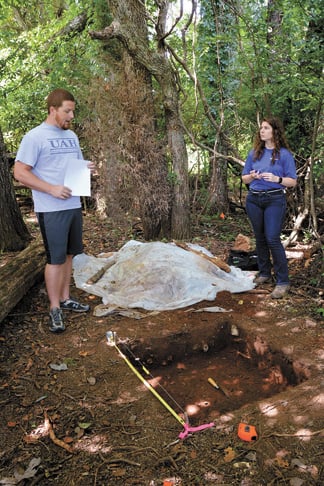 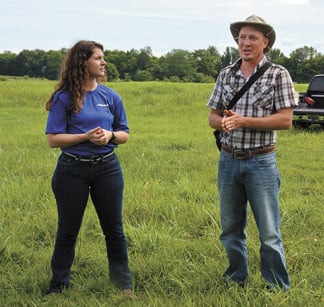 While Redstone enjoys a rich military and scientific history, its sprawling fields and farmland also can provide a window into the past.

Redstone Arsenal teamed up with The University of Alabama in Huntsville to sponsor UAH’s first archaeology dig on post. For two months, students, led by UAH professor Jeannine Windham and Redstone archaeologist Ben Hoksbergen, excavated a site adjacent to Rideout Road. What they found answered some questions, but in true scientific fashion, led to even more.

“The site was discovered in the late ‘90s but May was the first time that we started digging on it,” Hoksbergen said.

The students found artifacts from an antebellum home that were thought to sit on the site in the early 1800s. Many interesting artifacts were discovered including glazed brick, thought to be part of the hearth, ceramics and a door hinge to the house, which provided a layout of the house to the archaeologists.

“I get excited that we have found parts of the hearth,” Windham said. “I get excited about the utilitarian things. I want to know how people lived.”

Some inert munitions found will require further study to determine if they originate from the antebellum age or later.

“I thought that it was a button but it is actually a shotgun shell,” UAH student Tiffany North said.

Although their work at the site is almost complete for now, Hoksbergen plans to further examine a well that was found. The well, which is dry, can possibly answer questions to why the inhabitants of the home did not stay in the area for long.

The experience was educational for the students, many of whom had never participated in an archaeology dig. As one student said, “Before this, I thought that it was just about dinosaurs.”

“(I appreciated) having a better understanding of the site,” UAH student Ben Auman said. “It gives me a new respect for archaeology and history.”

Hoksbergen said this partnership, in addition to filling in the holes of history on Redstone, also saves taxpayer dollars with manpower being supplied by UAH. He hopes this is just the beginning of a continuing partnership with UAH. And with 965 historic sites identified on Redstone, they have plenty of history yet to explore.