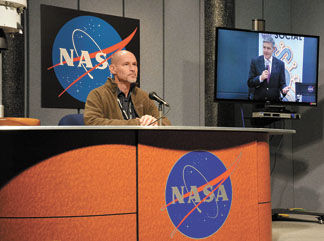 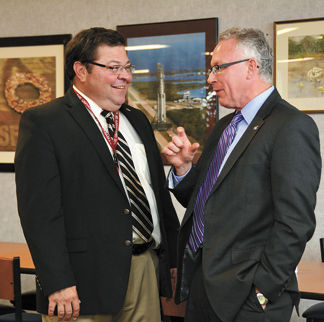 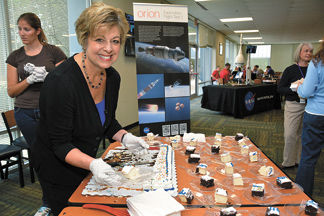 “NASA is the keeper of the future and a big part of that future is Mars.”

These words, by NASA’s chief scientist Ellen Stofan at the NASA Social live media event Dec. 3 featured on NASA TV, highlighted the excitement in the air with the imminent launch of the Orion Spacecraft on Exploration Flight Test-1 scheduled last Thursday morning. NASA invited members of their social media program to participate in the first-ever multicenter NASA Social event previewing the first flight of Orion. It was the first time that all 10 NASA centers participated in a multimedia event, including Redstone’s Marshall Space Flight Center.

Several of NASA’s top officials were on hand from Kennedy Space Center in Cape Canaveral, Florida, where Orion would launch, including NASA director Charles Bolden and Kennedy director Bob Cabana.

“This (Orion) is a continuation of what the Apollo astronauts started,” Bolden said. “When I talked to (astronaut) Neil Armstrong and others, they went to the moon not just to go to the moon. They viewed their lunar missions as a precursor for humans going on to other places, Mars being one of them.

“We have taken a 40-year hiatus in trying to make this trek and now we are back on the path. I think that for the first time since Bob and I have been engaged in the space program, we are closer than 30 years from going to Mars.”

Participants from all centers had the opportunity to ask panel participants at Kennedy questions about the Orion launch. Mark Simpson of Chattanooga was chosen from Marshall and asked astronaut Rex Walheim about crew quarter features inside Orion for its eventual mission to Mars. Walheim also addressed NASA’s leadership in the future of space travel.

“When people see (a rocket launch) the general reaction is pride in their country,” Walheim said. “When I see a rocket launch from here, I have this incredible sense of pride that I live in a country where we have the capability of rocketing people – just slinging them off the planet – all the way into lower orbit. And now we are working on slinging them off into deep space.”

After a one-day delay due to wind gusts and valve issues, Orion launched Friday morning and completed a four-hour, 24-minute voyage around Earth, before making a successful landing, ushering in a new chapter in America’s space exploration.

For more information on the NASA Social program, visit www.nasa.gov/connect/social/#.VIHkRUu4lFJ.