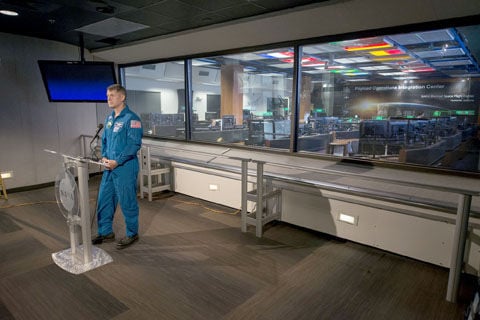 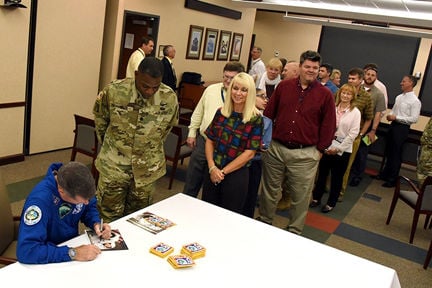 Like many youngsters, Shane Kimbrough always wanted to be an astronaut.

But life took him on a different path – to the U.S. Military Academy, Army Aviation

School and later, Operation Desert Storm. His childhood dream was nothing

suit. He was an Army astronaut, and after speaking to him and learning about the

Army Astronaut Program, Kimbrough set his sights on a new career path to the cosmos.

He was selected as an astronaut candidate in 2004. After successfully fi nishing

training two years later, he completed his fi rst space mission as part of STS-126 in

missions to space, having returned home from his second trip to the International

Space Station earlier this year. He made stops at NASA’s Payload Operations Integration

Center, which serves as mission control for the science experiments conducted

on the ISS, and Space and Missile Defense Command/Army Forces Strategic

“It was great to be back here at SMDC,” Kimbrough said. “It has been four or fi ve

years since my last visit, so it is always great to come back and visit with all of these

wonderful people. They always make me feel I am a part of the family and they still

accept me, even though I am retired.

“It is an amazing feeling to be able to represent the Army in space. The Army has

such a strong legacy in space, and to play a part in that is a real honor.”

Kimbrough spoke about his most recent trip to the ISS, in which he completed

four space walks in addition to the two from his earlier mission. He installed new

batteries for one portion of the ISS, replacing aging nickel-hydrogen batteries with

lithium-ion replacements. He also worked with the POIC on multiple scientifi c experiments,

including stem cell research which will benefi t medical therapies on Earth.

“The relationship between the astronauts and the people working behind me

(here) in the POIC is very important,” Kimbrough said. “They are the ones driving

the daily activities … most of the activities we do work like we plan, but sometimes

NASA has a long history of utilizing service members as astronauts, with military

pilots serving as the fi rst astronauts. Later in the 1970s, the Defense Department

provided astronauts to NASA for their developing shuttle program, with each

branch of the armed services establishing its own selection board. In 1978, Lt. Col.Robert Stewart became the first Army

He completed two shuttle fl ights as a

mission specialist. Stewart, who was

subsequently promoted to colonel, was

training for a third space fl ight when he

was selected by the Army for promotion

to brigadier general. He was reassigned

from NASA to Redstone Arsenal to assume

the role of deputy commander for

experiences about what he did on the International

Space Station was great for

said. “What really made it signifi cant

for SMDC is that it really brings a

sense of contribution to all our employees.

The visit highlights everything our

team does here affects things we

do from on the ground all the way up to

the Army astronauts, who get to travel

“Just having the opportunity for

people in the command to listen to Col.

great day for all of us.”

Although SMDC is known for its

it is still exciting when an actual astronaut

“Meeting our Army astronaut was

Action Group. “We were able

to ask actual intelligent questions and

get honest feedback. It was very enlightening

to learn how the astronaut selection

process works and about his time

“The most impressive thing was his

honesty. Being an astronaut is not as

glamorous as you would imagine. He

told how the space capsule was cramped

and crowded and it would beat you up.

To go through that, as well as having

to learn a different language, is all the

continues to serve as Army ambassadors

to NASA and the public, while

for active duty and retired Soldiers

country on the ground, in the sky – and