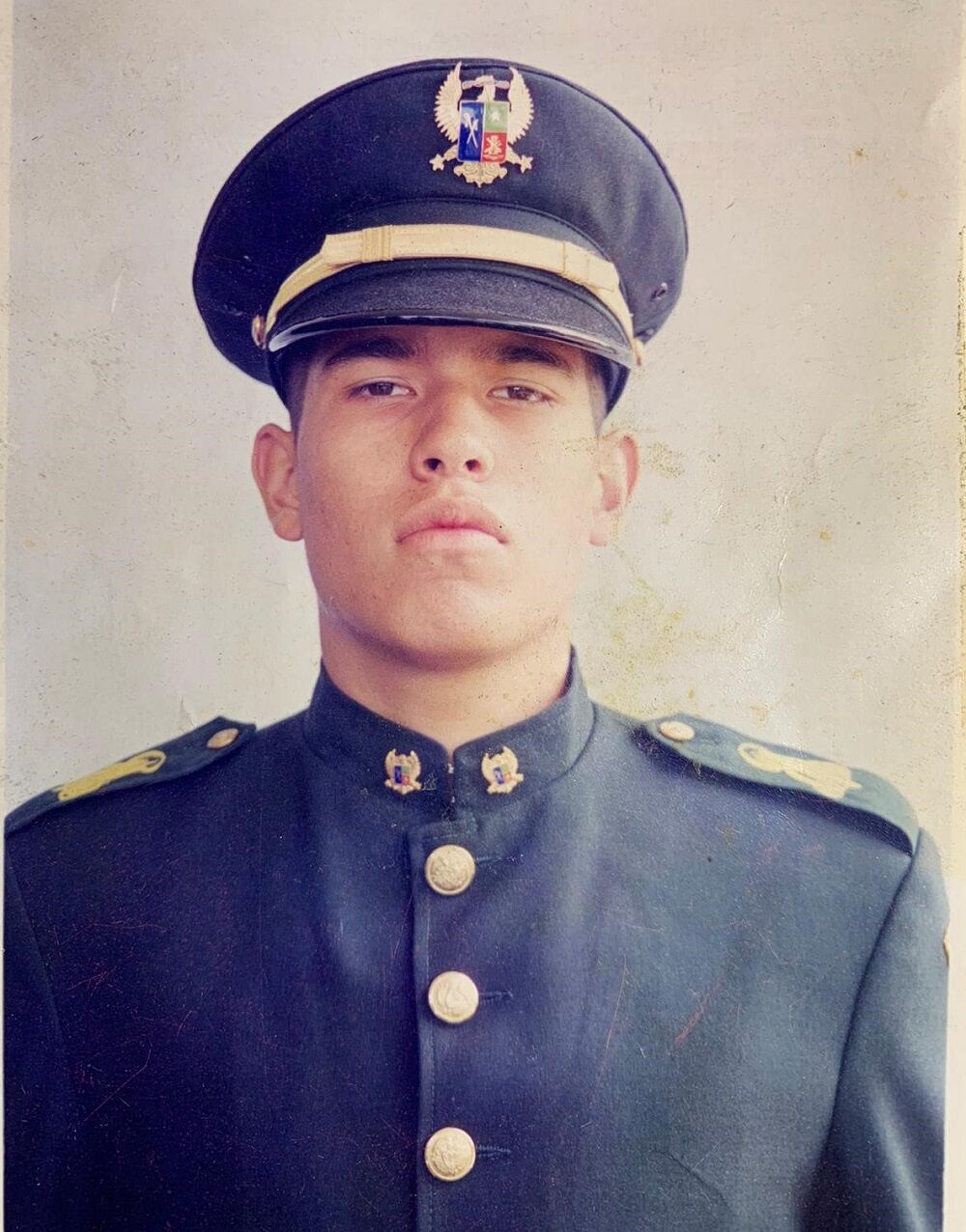 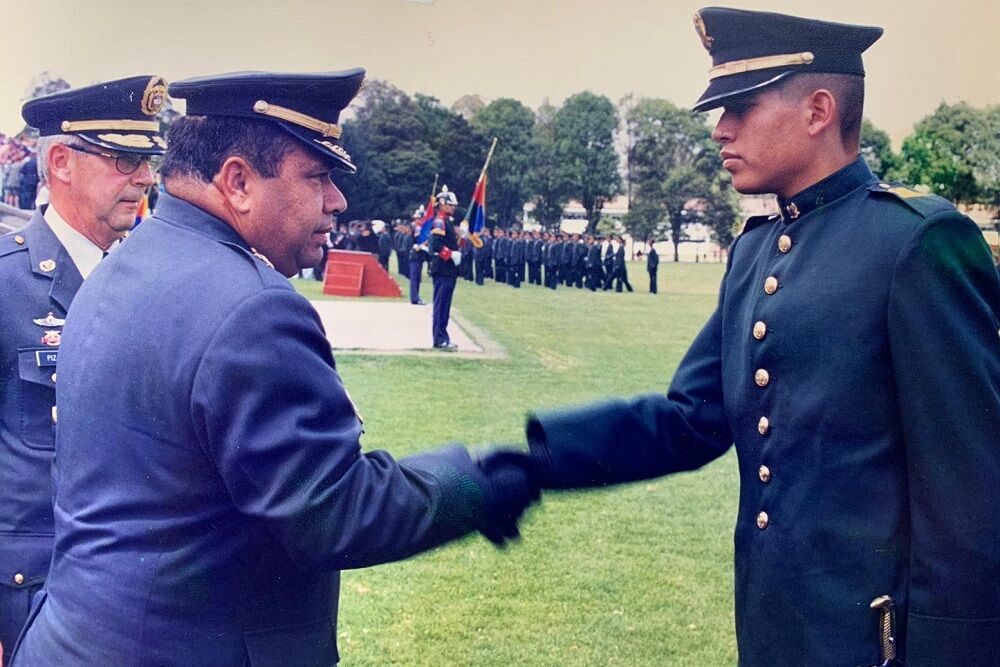 BOGOTÁ – As Chief Warrant Officer 3 Mauricio Garcia and his Colombian safety officer counterpart walk the flight line at a Colombian Army base, inspecting for safety hazards and violations, he could not help but marvel on how his life has come full circle.

The Colombian Ministry of Defense funds the five-person TAFT team, via a foreign military sales case, to advise the Colombian Army on how to run and manage their Advance Rotary Wing School, along with their aviation safety, supply, logistics and maintenance programs.

Due to his unique background and life path, Garcia’s official role of aviation safety officer is routinely overshadowed by the cultural, language, and in-depth knowledge he has accumulated over the past 20 years.

In this two-part story, Garcia now finds that his multiple military careers have merged in unexpected ways.

Born in Medellin, Colombia, to working class parents, he loved going out to the local airport to watch airplanes take off and land, knowing that one day his dream of flying might be a reality.

“My father was a transit agent and mother worked in a beauty spa, so I knew that it would be very hard for my parents to pay for flight school,” Garcia said. “My only chance to fulfill my dream was to join the Colombian Army or Air Force.”

At 16 and straight out of high school, he enrolled in the Colombian Officer Academy to prepare him for a career as an officer in the military, and hopefully into the cockpit of either a fixed-wing or rotary-wing aircraft.

Unlike military academies in the U.S., students at Colombian military schools have to fund the tuition costs themselves. In 1999, that worked out to about $1,200 per semester plus the cost of Garcia living by himself in Bogota where the school was located. Garcia’s parents worked hard to make sure he could stay in school.

In December 2003, after three difficult years of being away from home, with long hours devoted to dual-track military science and law studies at the military academy, Garcia graduated at age 19.

He soon found himself assigned as a second lieutenant in an Army infantry battalion, not what he was expecting, leading soldiers against terrorist and insurgent groups like the Revolutionary Armed Forces of Colombia, known as FARC.

Over the next six years, Garcia did what infantry soldiers do, attending advanced skills training like the counter-guerilla courses, the Urban Special Forces School, and graduating from the grueling Lancero School.

Built as a collaboration between the U.S. Army and Colombian military, the Lancero School is a result of a request in the mid-1950s by then-president of Colombia, Lt. Gen. Gustavo Rojas Pinilla, who asked the U.S. Army for help in building an advance tactics school for their military leaders. U.S. Army Capt. Ralph Puckett, a Ranger assigned to Puerto Rico’s 65th Infantry Regimental Combat Team, had the experience and language skills to make that happen.

Puckett and his team led that effort from 1955-57 and built the bedrock of what is known today as the Escuela de Lanceros, or Lancero School.

“One of my proudest memories of my time with the Colombian military was graduating from Lancero School,” Garcia said, who still wears that tab on his uniform.

However, after six years in the military, sometimes spending months in the Colombian jungle working counter-narcotic operations, Garcia knew it was time for a change.

“I left the Colombian Army because I never had the opportunity to fly,” he said.

While Garcia was preparing to do a year of community service as an intern lawyer, a mandatory requirement to receive his law certificate, fate presented him an unexpected turn as his uncle in Miami, Florida, invited him to the U.S. to study English.

“I never saw coming to the States as an opportunity, mainly because I didn’t speak English,” he said. “But I wanted to learn English to prepare myself better for a future career as a lawyer in Colombia.”

In 2007, Garcia moved to Miami to start classes at a community college. After his girlfriend from Colombia visited, they discovered their relationship was going to change with an unexpected arrival.

“She’s from a very conservative family so we got married,” Garcia said. “My wife was an American citizen from birth, and after we decided to stay and live in the U.S., I told my wife that the minimum that I can do is to serve my new home country.”

Even without the language skills he thought he would need, Garcia enlisted in the U.S. Army in September 2008, where he spent the first eight months at the Defense Language Institute, in San Antonio.

“I passed my proficiency test and was shipped out to basic training at Fort Sill, Oklahoma,” he said.

After basic training, Garcia moved on to his military occupation skill training at Fort Sam Houston as a 68J medical logistics specialist, which involved receiving, storing and issuing medical supplies.

Over the next four years, Garcia served with the 31st Combat Support Hospital at Fort Bliss, Texas, deployed to Afghanistan in 2009, back to El Paso, and then in 2011 moved the family to Washington, D.C., when he took an assignment at Walter Reed Army Medical Center.

“When Walter Reed closed (due to a Base Realignment and Closure decision) I had to decide between going to Bethesda or Fort Belvoir Community Hospital, where I eventually decided to go to,” he said. “Even after moving to Fort Belvoir, and helping to open up the hospital in January 2012, I was thinking about flying and how to make that happen.”

Editor’s note: On May 21, retired Col. Ralph Puckett received the Medal of Honor for his heroics during the Korean War.