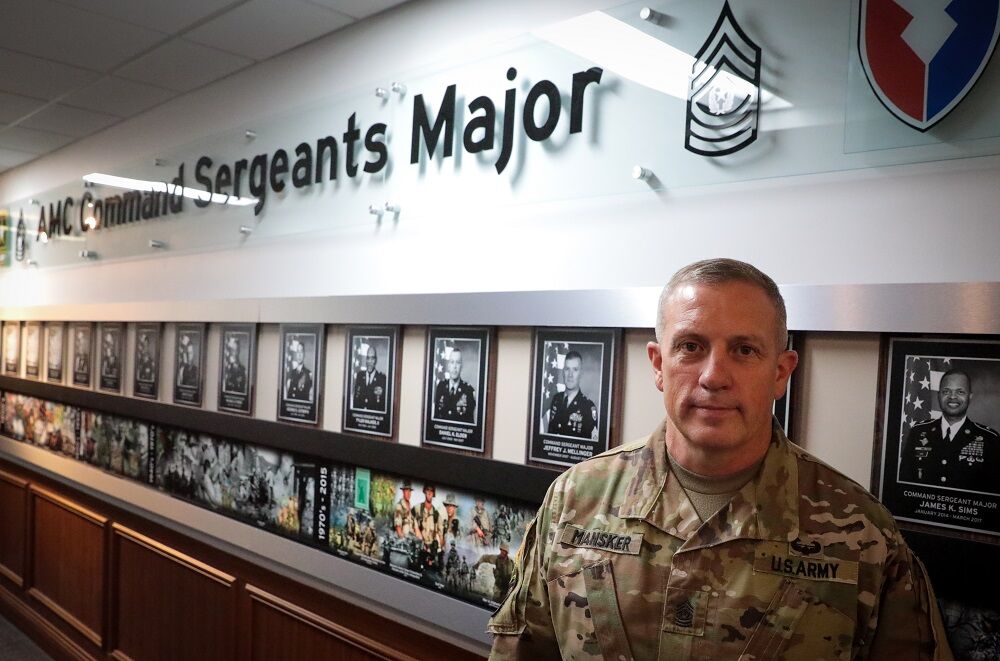 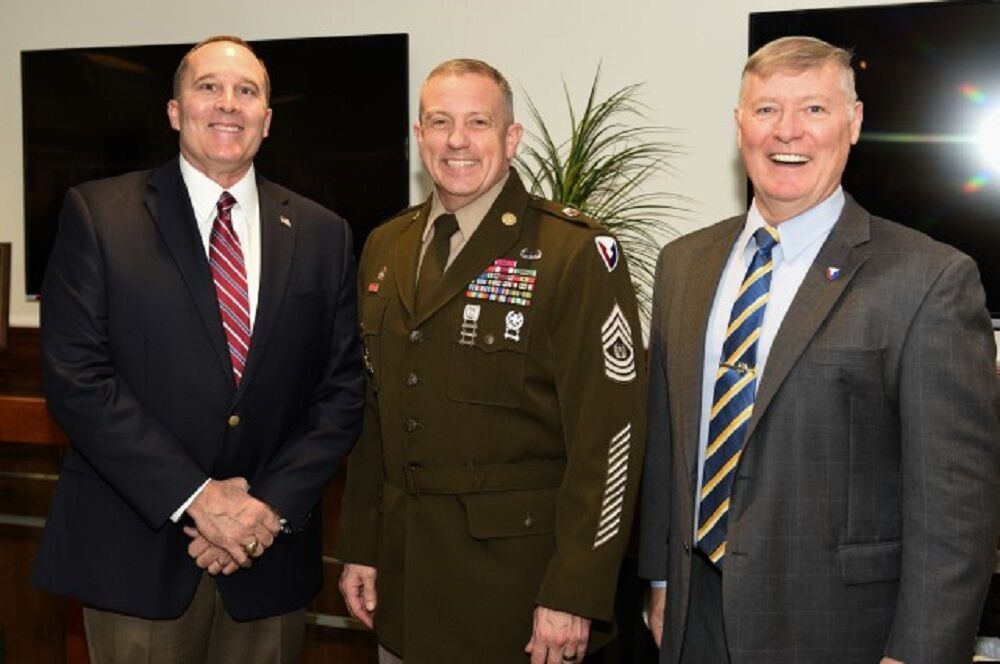 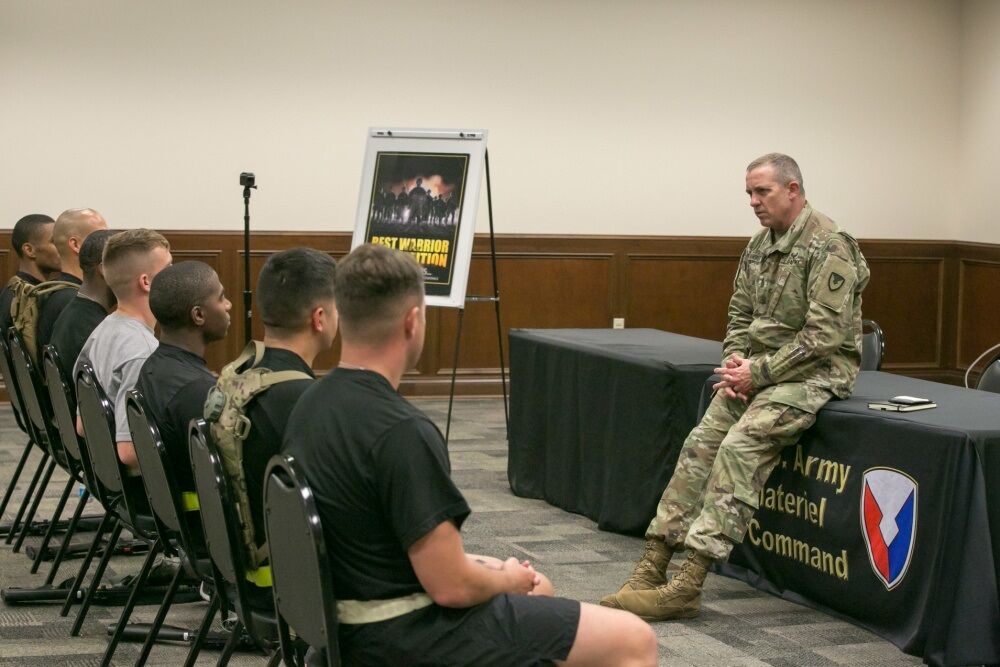 With 34 years of service as a Soldier, Command Sgt. Maj. Rodger Mansker is considering new roles and responsibilities as he plans to trade in his uniform for civilian life.

“I will be letting go of something I love. I won’t be a leader at this level anymore on Army priorities. I won’t be in the fight every day,” Mansker said. “I’m very proud of being a command sergeant major and being part of the AMC team. But at the same time, this is bigger than my rank. This is about what the Army stands for – change, tradition, service, new leadership. And in a way, I am looking forward to telling people I meet, ‘Just call me Rodger.’”

Mansker will pass the reins in a change of responsibility ceremony Thursday as Command Sgt. Maj. Alberto Delgado becomes AMC’s highest ranking noncommissioned officer. A retirement ceremony for Mansker is scheduled for a later date.

“I’ve worked to change the stereotype of what an AMC command sergeant major is,” Mansker said. “When I came to AMC, I already had an understanding of the resources, processes and structure that make this command successful in providing logistics and sustainment to the Army. That understanding allowed me to build credibility and trust quickly with the real experts here at AMC and in the field, and it led to an appreciation of what the AMC workforce accomplishes every day.”

Although the diverse assignments in his enlisted career prepared him for leading at the four-star level, Mansker said it was his last two assignments prior to AMC – first as command sergeant major for the Security Assistance Command and then as the command sergeant major for the deputy chief of staff for logistics (G-4) at the Department of the Army – that grew his experience and understanding at the strategic level.

“The assignment at USASAC allowed me to stand outside of the Army and watch how we are viewed by our international partners,” he said. “The Army G-4 helped me to know where influence points are, who the decision makers are, how resources are allocated and managed, and about how systems and processes operate at the top Army levels.”

At AMC, Mansker used that capability to advise leadership on AMC missions, enlisted matters, and quality of life issues for Soldiers, civilians and families across the command enterprise as well as training for the Soldier force. At the Army headquarters level, he served as a board member on the Sergeants Major Senior Enlisted Council, and engaged Army leaders, and command and Combatant Command senior enlisted leaders on AMC objectives and issues.

“With AMC, there is a good set of systems and processes in place to achieve the mission,” he said. “But at the Army level, and the national and global levels, there are logistical and sustainment influences that AMC has to respond to while also keeping things on course in support of Army priorities and our stated outcomes.

“In my role, I hope I changed the perception of the capability of a sergeant major. The base of a sergeant major never changes, but above the sergeant level, you can add to experience and knowledge to build a very educated and diverse NCO force that can be part of the conversation when managing the Army at all levels. I hope I’ve contributed to changing the perception and expectation of a command sergeant major, and to setting the foundation for the next person to make this assignment even better.”

Throughout Mansker’s career – which began in 1985 and includes a wide range of assignments as well as deployments to Iraq, Saudi Arabia and Somalia – his goal has been to set the conditions for the NCOs following him and to motivate them to aspire to be better both personally and professionally.

“Every job you take should be a little uncomfortable or a little bit stressful because you are growing your skills and expertise, and challenging yourself,” he said. “We all need to continue to grow as professionals and as better people, and we should be influencing others to grow as well.

“Officers and commanders should expect great leadership and mentorship from their sergeants major. They should expect an NCO that will make a real difference in their leadership of a battalion or a brigade, or even a four-star command. The Army has invested in our education and our career assignments. If we take that investment, we have to give in return.”

“My hope is that I’ve taken what I’ve learned and shared it with other Soldiers. It is more important to me that they are successful,” Mansker said. “I get a lot of fulfillment out of teaching and mentoring. I enjoy helping to grow other people’s understanding and knowledge, and influencing how they think, approach things and understand things. It’s about leader development and opening the aperture to the opportunities out there, and fulfilling my commitment to the Army and its missions.”

Mansker said Soldiers should expect to be led by NCOs who have high morals and ethics, and understand how to lead.

“Soldiers deserve the best leaders. But, for me, it wasn’t about the joy of leading. It was about the joy of being part of a team,” he said. “For Soldiers, a career should be about continuing to get better, changing, adapting, and doing what’s right for the Army, for our fellow Soldiers and for the nation.”

Although he will soon retire and go on to a civilian assignment in the area, Mansker will hold on to his passion for the Army, and continue to serve in other ways.

“This has been a great career for me. Never a day has gone by without my knowing I had a purpose, a calling. I’ve met incredible people, and firmly believe in the Army and AMC,” Mansker said. “I’ve been part of a great team. Now the next person needs the opportunity to step up.”