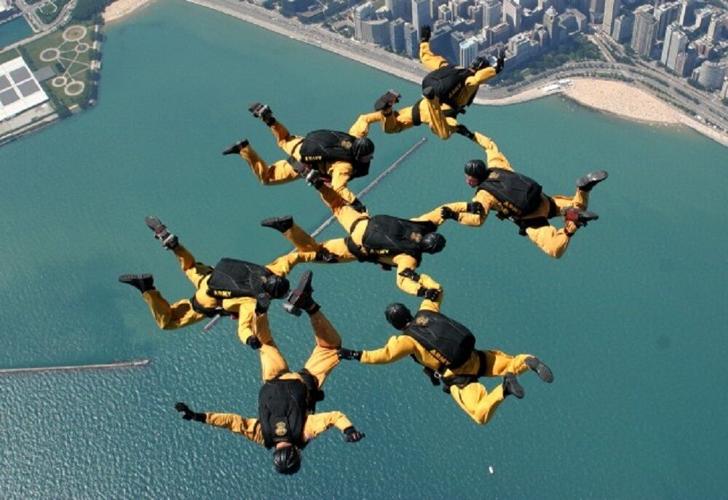 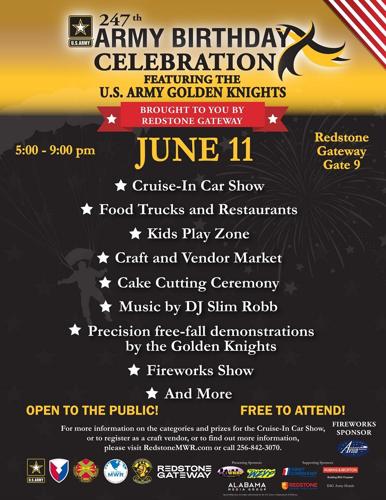 Redstone will have a huge birthday party a month from now.

The 247th Army Birthday Celebration, featuring the U.S. Army Golden Knights parachute team, will be held Saturday, June 11 from 5-9 p.m. at the Redstone Gateway at Gate 9.

“It is open to the public free of charge,” Kenneth McDonald, event director, said. “Last year was the first time that we did it at the Gateway. And we had over 3,500 people in attendance. And we expect anywhere from 4-5,000 this year to attend because the Golden Knights are going to draw them in. They’re going to come from everywhere.

“This is the first time the Golden Knights have ever jumped at Redstone Arsenal, so it is a big deal.”

The Army team will do a precision free-fall parachute demonstration to open the celebration at 5:40 p.m. The official cake-cutting ceremony is scheduled at 6.

There will be a Cruise-In Car Show from 5-7:30, followed by the awards presentation. Register for the car show online by June 3 at redstonemwr.com. Entry fee is $5 per vehicle; and it’s limited to the first 130 vehicles. First, second and third place will be awarded in cars, trucks and motorcycles. There is also an overall best-of-show Commanders Cup award. First place is a $200 gift card; second, a $100 gift card; and third, a $50 gift card. The Commanders Cup is a 2-3 foot tall golden cup. “It’s beautiful,” McDonald said.

The celebration also includes food trucks and restaurants; a kids play zone; a crafts and vendor market; and music by DJ Slim Robb, from Birmingham.

“And the finale will be the grand fireworks show and it’s amazing,” McDonald said. “That will close it out at 8:30, right at dark.”

Garrison Commander Col. Glenn Mellor encourages the entire community to come out and help the Army celebrate its 247th year.

“We learned a lot last year and it was a great event,” Mellor said.

McDonald said, “The 247th Army Birthday will be the largest Army celebration for the community.”

The Army was founded June 14, 1775. Besides the Army birthday, June brings the Army Heritage Month.