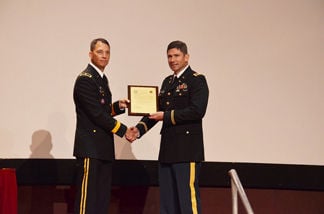 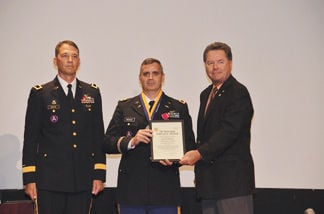 The Non-Standard Rotary Wing Project Office within the Program Executive Office for Aviation said farewell to its second project manager and welcomed a new leader during a change of charter and retirement ceremony July 14 at Bob Jones Auditorium.

“If you don’t work specifically in Non-Standard, you probably don’t have a good frame of reference of what they have to do and the things they have to accomplish every day in order to be successful,” said Brig. Gen. Bob Marion, program executive officer for aviation, who presided over the ceremony.

Marion talked about the scope of the office’s mission that supports more than 30 allied nations around the world. At any given time, the office has 60 foreign military sales cases ongoing, which differ in size, scope, product, service and urgency of what is being delivered.

The mission of the NSRWA PMO is to procure, field and sustain non-standard rotorcraft for the Department of Defense, allied countries or as directed by the Office of the Secretary of Defense in support of Overseas Contingency Operations, and is DoD’s focal point for non-standard rotary wing aircraft. The term “non-standard” specifies any rotary wing aircraft that is not a “standard” procured and sustained item within DoD.

Since many of the platforms that the NSRWA PMO supports were developed, designed and produced in countries other than the U.S. and continue to be maintained and sustained by companies that aren’t based in the U.S., it creates a different set of challenges when it comes to the specific product, Marion explained.

He described the NSRWA PMO as his “biggest blind spot” when he first took office because while the normal processes and regulations that acquisition managers learn “apply philosophically” to the office, “a lot of times, the actual process doesn’t apply to the non-standard rotary wing project office,” Marion said.

“This project office experiences what we don’t normally see in the other project offices. And then when you talk about process, we have very prescriptive processes where we do things in terms of requirements even if it’s an urgent operational need.

“This office has had the opportunity to review legislation before it becomes into law,” Marion said. “This is the PM office that operates with the most degree of autonomy, and that is a testament of the trust that they have earned from our senior leaders.”

In his remarks, Brashear lauded the NSRWA team for their extraordinary and exceptional performance. “We are charged with providing rotary wing capability to partner nations so that U.S. forces do not have to deploy,” Brashear said. He said an unspecified facet of the mission is that the office strives to use its mission to help strengthen the American aviation industry. “All of our business is foreign military sales. We really want to get those dollars that were spent on foreign goods repatriated here in America.”

“Regardless of the mission or the timeline, the team has always responded effectively. Someone always stepped up and took responsibility. Every day the team has impressed me and made me feel like I’m not doing enough.”

Brashear said the NSRWA PMO team is successful because it is “agile” and “quick to react” but “slow to agitate,” an essential characteristic for the NSRWA team.

One of the most interesting aspects of the NSRWA PMO is its involvement with policy personnel in the DoD and other agencies in government including the State Department and the Department of Treasury. “We were often involved in discussions that deal with America’s influence around the globe and efforts by other countries to expand their influence,” Brashear said. “From that perspective, the best thing we can do is to continue to deliver American-made capability to our customers and to minimize the disruptions.”

Brashear lauded the team’s accomplishments during his term that included the delivery of 30 militarized Mi-17 V5 aircraft within 13 months of contract award – an unprecedented feat within the DoD – added post production modifications consisting of ballistic system protection, the Afghan national tracking system, and the defensive weapon upgrade. Additionally, the NSRWA PMO has contracted for an additional 42 Mi-17 V5 comprised of 12 aircraft to replace battle damaged and aging aircraft within the Afghan Air Force and 30 aircraft for the Afghanistan Special Mission Wing.

“But the Mi-17 is not the only aircraft we dealt with,” Brashear said.

Most recently, they delivered the first six Armed MD-530s equipped with the Cayuse Warrior mission equipment package to Afghanistan early this year, which helped to increase the Afghan Air Force aerial fires capability. The aircraft were fielded within six months of the need being stated and contract being awarded. An additional six Cayuse Warriors were fielded less than three months later.

“The key for us is to understand what is possible in terms of what is relevant and what is realistic. We must have valid processes and we must be methodical and diligent.”

Brashear also recognized the team for achieving all of its objectives and succeeding in the very diverse and vacillating aspects of the office’s mission. He thanked the “champions within the Pentagon,” SAMD, USASAC, the forward deployed teams, Army Contracting Command-Redstone, Aviation Engineering Directorate and several other organizations within the DoD.

“They understand the basic principles of establishing and maintaining a partnership, and they work together to help the partners achieve their own individual and organizational goals.” Together, the team is helping to keep America and American Soldiers safe, Brashear added.

Marion thanked the NSRWA PMO team for maturing the office since its inception in July 2010. “What you do is integral to operations tomorrow. I can’t think of a better person to lead this office and take it to the next level than James Kennedy.” He added that Kennedy brings to the office the necessary experience and integrity that is vitally important to accomplish the NSRWA mission.

In his remarks, Kennedy emphasized that he does not take his new mission lightly as it comes with enormous responsibility. “I’m ready to take on this challenge,” he said.

To the workforce, Kennedy said, “I offer you the best of my ability to be successful in the mission that we are performing. It’s a difficult and important mission as we help them help our allied partners in this world that is increasingly becoming more complicated every day.”

His wife, Michele, was also recognized with a Certificate of Appreciation from the chief of staff of the Army, Gen. Ray Odierno, and the Our Lady of Loreto Award from the Army Aviation Association of America.