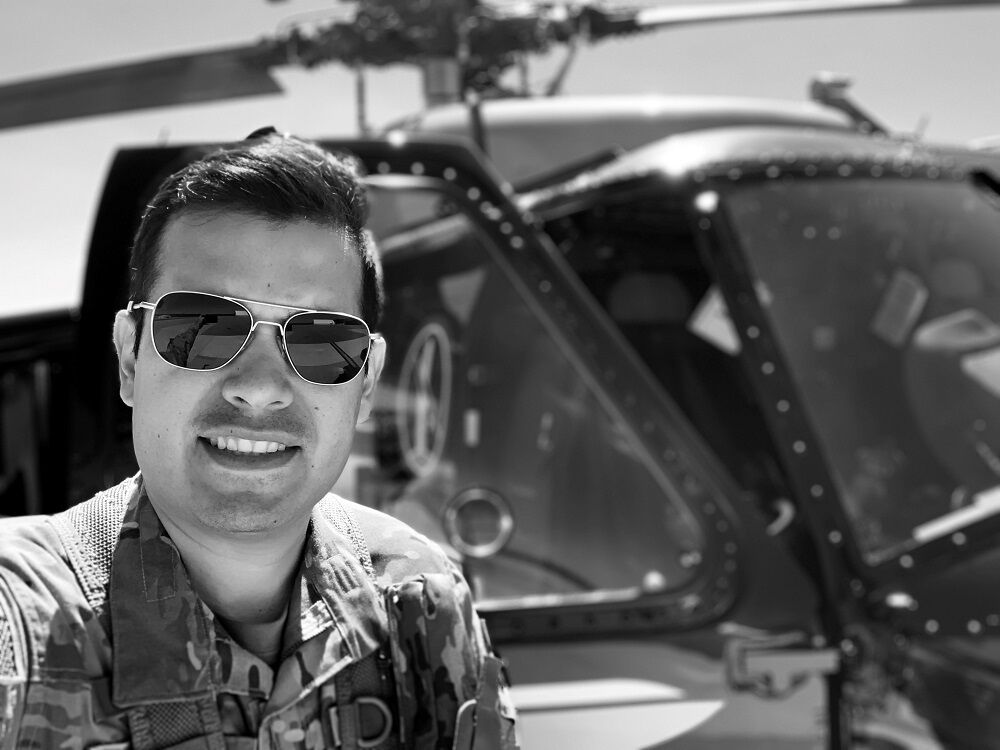 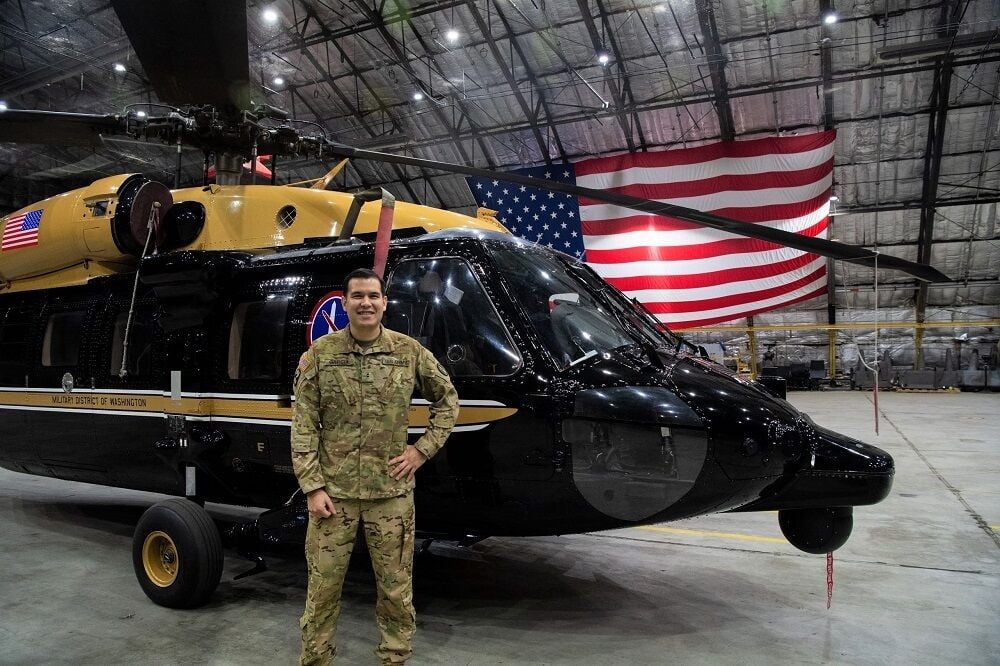 Now, in a military career spanning more than 20 years and the armies of two countries, Garcia’s career has serendipitously come full circle.

Garcia grew up dreaming about flying, but knew his parents could not afford flight school. At 16, he enrolled in a military officer academy, hoping to join the Colombian Army as an aviator.

That never happened. Instead, he became an infantry officer, leading soldiers in the fight against insurgents in the rugged jungles of Colombia for months at a time.

Garcia left the Colombian Army after six years to pursue a career as a lawyer. In a twist of fate, he accepted an offer from a relative to live and study in the U.S., to better his English language skills.

After getting married and becoming a father, Garcia said, “The minimum I could do was to join the military as a way to give back to my newly adopted country.”

In 2008, he enlisted in the U.S. Army, and rose up the ranks as a 68J, medical logistics specialist.

His dream lives on

In early 2012, then Sgt. Garcia spent weeks planning and studying for the Army’s Flight Aptitude Selection Test, his next big hurdle.

“I bought some books and studied all this pilot stuff, all about flight instruments, it was all in technical English so it was pretty hard,” he said. “But becoming a pilot was my destiny.”

Garcia was surprised he passed the test. Now, to build his warrant officer application package he would need letters of recommendation; one had to be from an Army senior warrant officer.

Powered by his dream to fly Black Hawks, he went to Fort Belvoir’s flight line, looking for a pilot.

“I actually remember the day he walked through the front doors of the battalion, and I clearly saw he looked like he was lost,” Chief Warrant Officer 4 Stan Koziatek, the battalion safety officer for the 12th Aviation Battalion at Fort Belvoir, Virginia, said. “I asked him ‘can I help you’ and he said he was looking for a pilot. I told him he was in luck, here I am, and then he told me his inspiring story.”

Koziatek had met many Soldiers asking for letters of recommendation, but he felt many wanted to become pilots the easy way. In Garcia, he saw something different – an impressive life story, and a deep, steadfast passion for flying.

“I was like ‘holy cow’ it wasn’t easy what he did, coming from the Colombian Army, then Special Forces, moving to Miami to do better for his family, then joining the Army and all along he still wanted to be a pilot,” Koziatek said. “I was glad to help him as I saw he was an experienced Soldier with a lot of leadership skills.”

Over several months, Garcia and his new mentor would spend hours talking and going through his package to make sure it was perfect.

“I was super excited and went back years looking at statistics and ranks to see if I had a chance to get into flight school,” Garcia said. “Most who got selected were crew chiefs or worked in aviation, so coming from the medical field I didn’t think I had a chance, even though I think I had a strong package.”

Koziatek knew the hardest part of the entire process was putting the package together to submit.

“It takes a lot of preparation to put in the complete package, some people take almost a year to do it,” Koziatek said. “But he was on it and had his packet ready within months. That’s how I knew he was dedicated enough to be a warrant officer, because he just didn’t give up, he put 100% into it.”

Once submitted, Garcia anxiously watch the Army’s MILPER Message site, daily. One day, after checking the site, he left to take a shower. While he was away, his phone pinged congratulatory messages.

“I jumped on the computer to make sure it was real,” he said. ”I was pretty emotional, I cried.”

In June 2012, Garcia and his family moved to Fort Rucker to start his flight path to becoming a Black Hawk pilot for the Army.

“Flight School is probably one of the most challenging trainings in the Army, physically and mentally; especially when English is your second language,” he said.

After Garcia graduated from flight school, he was assigned as a Black Hawk pilot in Korea. Two years later, Garcia and his family returned to the States, where he served in the same 12th Aviation Battalion, in the same building that he walked into years earlier looking for a pilot.

For the next several years, Garcia would fly civilian and military dignitaries through the skies of the nation’s capital, accumulating more than 1,000 flight hours.

In 2020, Garcia accepted a tour as the aviation safety officer for a Spanish-language SATMO technical advising team. His duty location, a Colombian Army aviation base a mere 250 miles from his hometown.

Reflecting upon the long flight path to get to this point in his career, he credits his parents, a father that lives in Miami, Florida, and a mother that lives in Lorton, Virginia, for helping him accomplish his dreams and for believing in him.

“I also really have to say thank you to my wife and kids, for all their love and support,” Garcia said. “I know it has been hard for my kids to move so often and for me to miss so many important days with them. The most important thing I feel is to show them we have to serve our country. With hard work, discipline, and dedication you can achieve all your goals and dreams, so never stop dreaming.”

“Mauricio’s successful military career is an inspiration for others to follow,” Koziatek said. ”I am very proud of him and happy to be part of his success. People succeed when they have fun in what they do; Mauricio loves what he does and it shows.”

Editor’s note: Army National Hiring Days began May 10 and continue until June 14, the Army’s 246th birthday. This is the second year for the nationwide virtual career fair where people can talk one-on-one with an Army recruiter and learn about the variety of job opportunities and signing bonuses available. Visit www.goarmy.com.