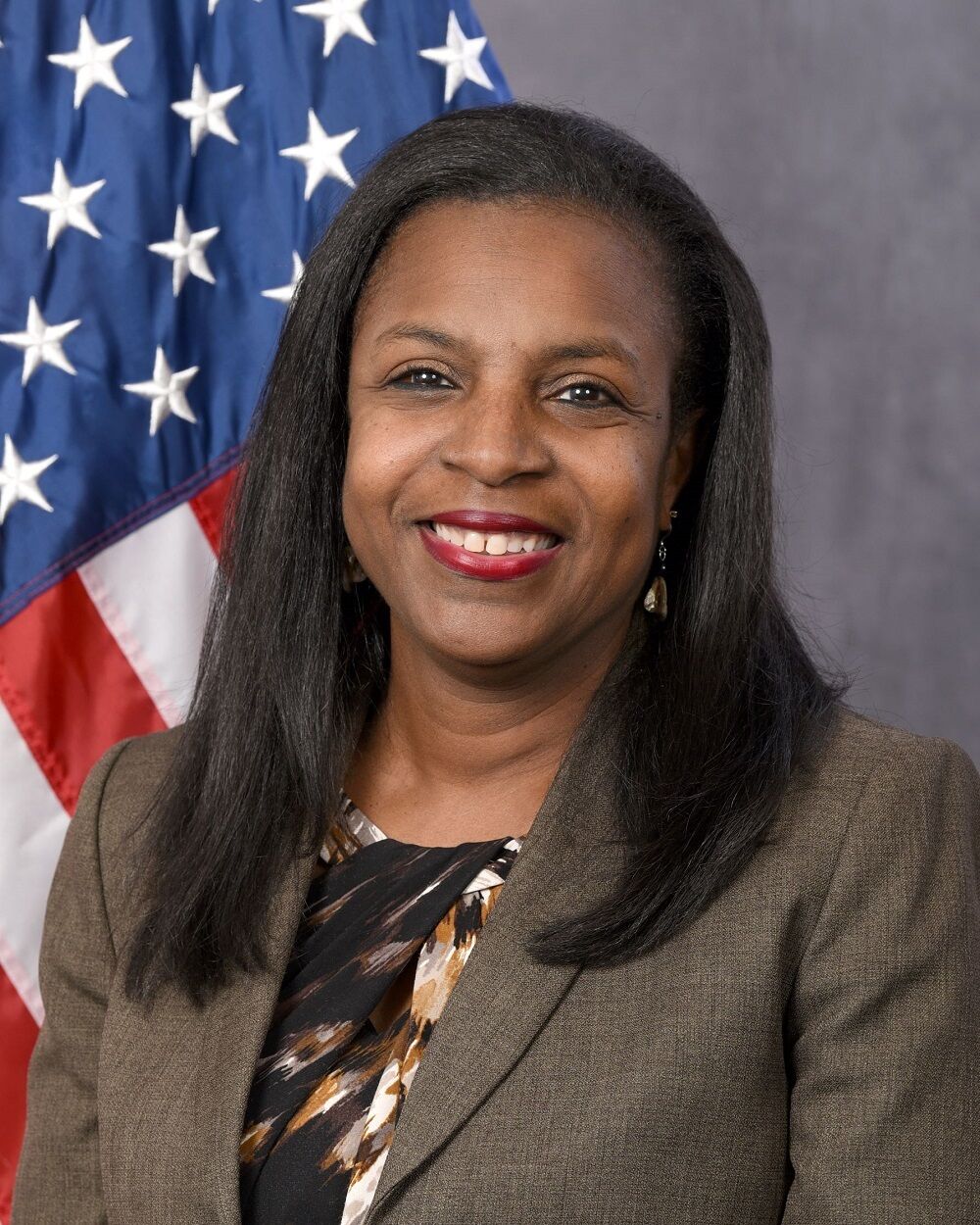 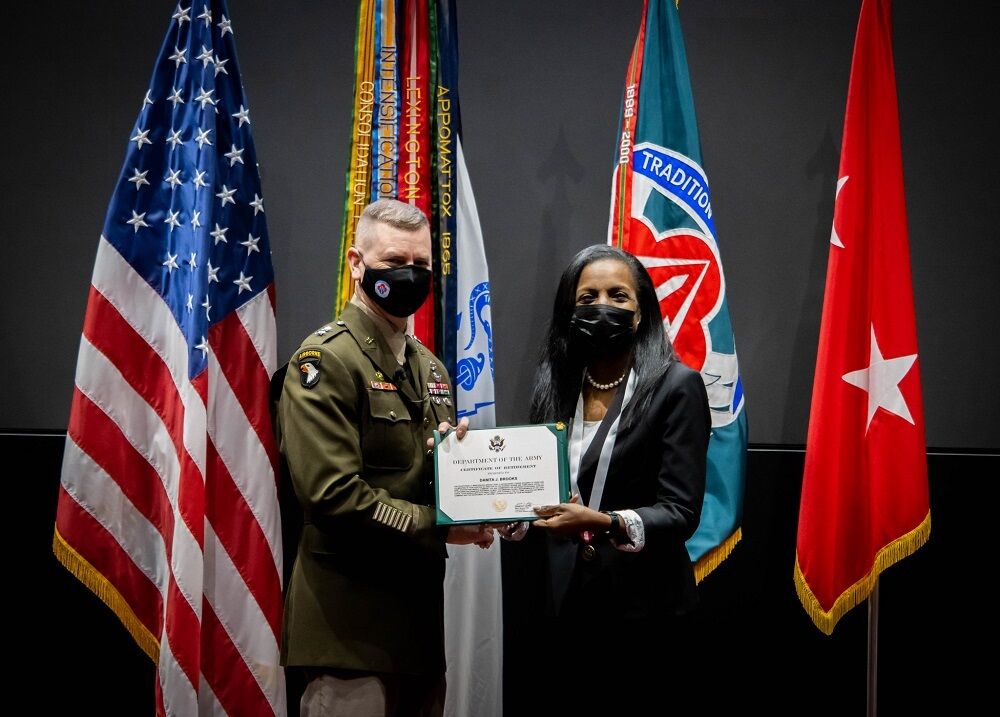 Danita Brooks carved out her own path.

For 33 years, the Huntsville native selflessly served as a government civilian. And most of that time was spent at what is now the Aviation and Missile Command.

Though her father served in the Army before she was born, Brooks said his service didn’t have an impact on her decision to become an Army civilian. But it’s quite possible she was the start of another wave of service – her younger brother retired from the Air Force and later became an Army civilian at AMCOM (he’s now retired for a second time), and her younger sister also works for the federal government.

“I saw working for the Army as a good opportunity,” she recalled. “I also saw it as stability.”

Brooks graduated from the University of Alabama in Huntsville with a bachelor’s in industrial and systems engineering, followed soon after by a master’s in business administration with a concentration in management.

While in college, Brooks got her first taste of government service when she did a co-op with the Corps of Engineers for a couple of years.

After a brief stint with a now-defunct contractor, Brooks got a job in the early ‘90s as an industrial engineer with the Missile Command – now AMCOM – in the Acquisition Center’s Quantitative Analysis Division.

“I was one of the engineers who worked on doing quantitative analyses for the contract specialists,” she said. “I used to tell my sister all the time, ‘If you work for the government, you can do all kinds of different jobs. You don’t have to move – you can find numerous opportunities – everything you want within (one organization).’”

And Brooks did just that.

Starting in 1996, she worked as a general engineer in the Command Analysis Directorate. In 1999, she served as a research adviser, consultant and review authority in the Strategic Planning Office. In 2002, Brooks spent nearly two years at the former Aviation and Missile Research, Development and Engineering Center where she was matrixed to the Short Range Air Defense Project Office. In 2013, she was one of 24 board-selected Army civilians to attend the 10-month Senior Service College Fellowship Program that focused on strategic-level critical thinking, leadership and acquisition management. And, in 2014, she did a four-month developmental assignment at Army Materiel Command.

It was after her time at the SHORAD Project Office that Brooks decided she was ready for a change. Someone mentioned Lean Six Sigma, a methodology designed to improve processes while reducing or eliminating waste and redundancy of processes.

“I had someone that said, ‘This might be a good fit because you’re an industrial engineer (and) you know Six Sigma.’”

From there, Brooks went to work in the Lean Six Sigma Office, which later became the Office of Continuous Improvement.

“I absolutely loved it, because I love processes,” she said. “That’s my passion – process improvement, looking at processes and improving processes.”

Starting as a facilitator, she worked her way up to division chief with Lean Six Sigma Black Belt certification and became AMCOM’s first trained Master Black Belt. In 2009, she became the OCI director.

Now-retired Maj. Gen. Jim Rogers commanded AMCOM while Brooks was the OCI director. She said he was one of the people who made an indelible impact over the course of her career.

“He looked at everything from the lens of, ‘How can we improve? How can we make things better for the warfighter?’” Brooks said, adding that he supported whatever was needed for the OCI to be successful.

Rogers’ leadership – and, later, that of then-chief of staff and now current AMCOM Commander Maj. Gen. Todd Royar – influenced Brooks and her style of leadership. She described both men as servant leaders who walk what they talk. She thanked them publicly during her retirement ceremony.

In 2014, after the SSCF and the developmental assignment at AMC, Brooks became the director of AMCOM’s Internal Review and Audit Compliance Office, which has turned out to be her last stop.

Along with all the Lean Six Sigma and other certifications, Brooks has garnered a long list of recognition and accolades – including numerous exceptional performance appraisals and nomination by the AMCOM commander for the Association of the U.S. Army Redstone-Huntsville Chapter, Department of the Army 2012 Civilian of the Year Award in the Management/Executive category – all along the way.

“Simply put, Danita has been a stalwart inside of this organization and inside the Army,” Royar said at her retirement ceremony Dec. 13. “She has done remarkable and amazing things.”

Royar highlighted three attributes he said Brooks brought to the organization: her competence, the values she upholds and her ability to prioritize those values and requirements from a job perspective.

“There has been a consistent theme to what she has been able to provide, and that’s really been process improvement, quality and making things better,” Royar said.

“From an organizational perspective, I am sad,” he said. “I’m sad to lose a phenomenal teammate... but we know that your legacy will live on because of your competence, because of your values and because of the priorities that you’ve demonstrated to all of us – those that you have touched, coached and mentored along the way.”

For Brooks, though hers has been a fulfilling career, she has now left a job she absolutely loved. But she’s going to have a lot of time to devote to something else she loves more than words could say: her husband Kenneth; children, Kenneth, Alexis, Christian and Bryan; 5-year-old grandson Jaden; and extended family who don’t live in the local area.

It’s worth noting that Brooks and her husband had a longstanding agreement to retire at the same time, so they both have more flexibility ahead.

“A good friend of mine said, ‘I’m not really retiring; I’m repurposing myself,’” Brooks said with a laugh.

Brooks plans to “repurpose” herself by spending lots of time with her grandson, being more active in her church and traveling.

During her retirement ceremony, Brooks told a story about how she used to be so afraid to fly that she mapped out road trips versus getting on a plane. Her fear of flying was so severe that, when her then-fiance asked where she wanted to go on their honeymoon, her response was, “Anywhere, as long as we don’t have to fly.”

“I really limited myself,” she said.

She didn’t know it at the time, but the Army career that Brooks thought would provide opportunity and stability also resulted in significant travel – travel to places one cannot get to solely by ground.

Decades later, the woman who was once plagued with aerophobia and was determined not to fly – by any means necessary – might even be considered well-traveled in some circles.