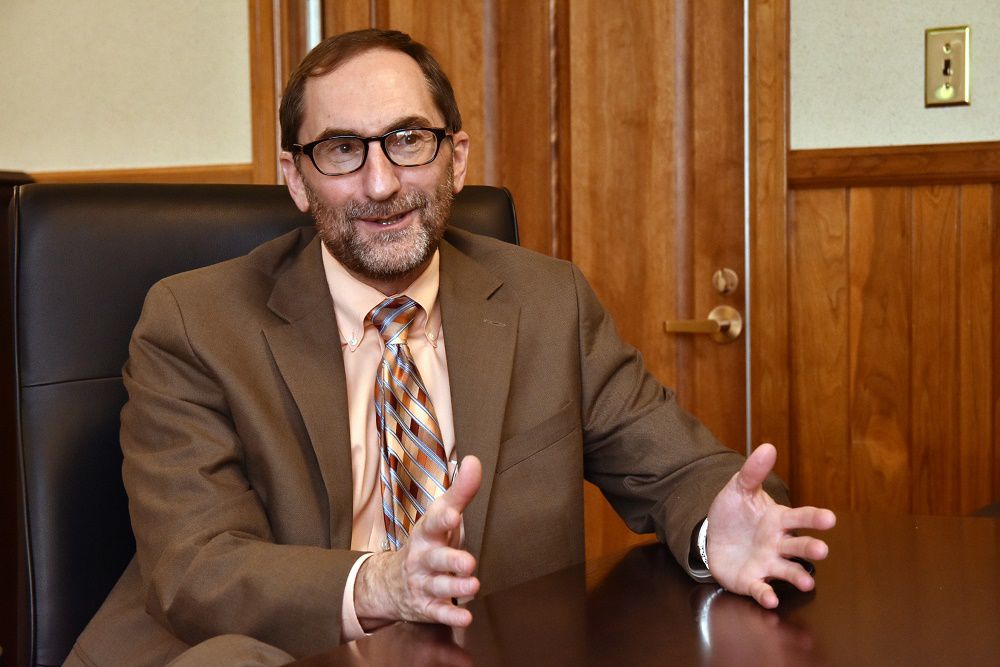 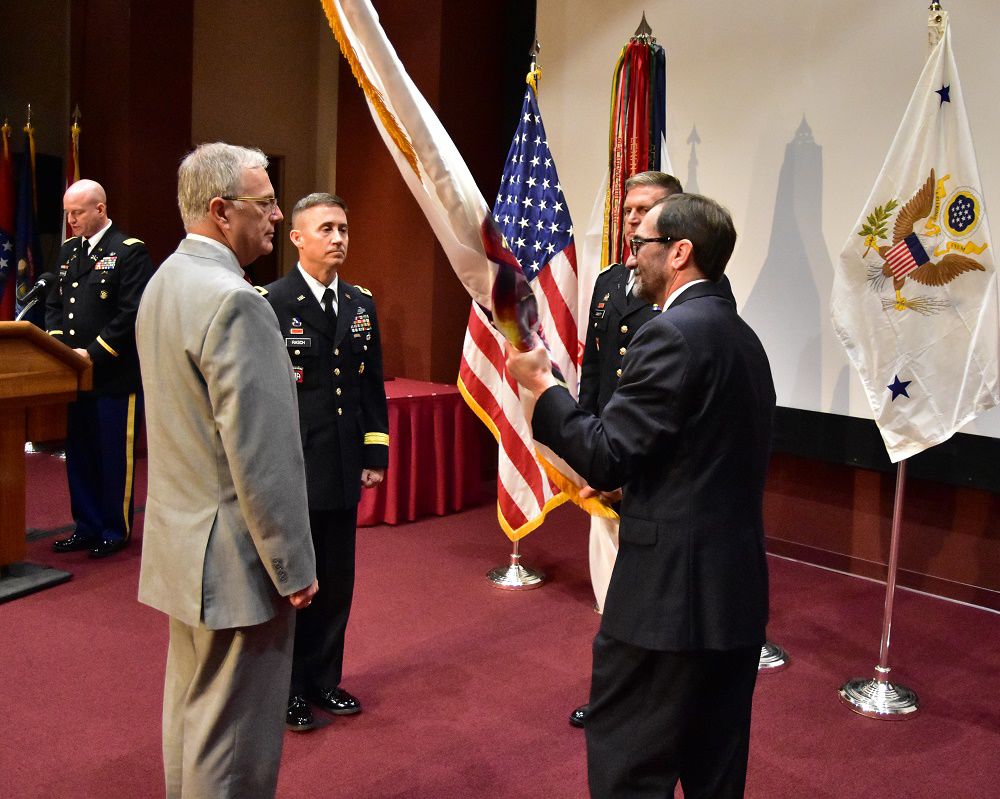 Barry Pike might be leaving the Program Executive Office for Missiles and Space but he won’t be a stranger.

Pike, program executive officer since 2016, is assuming the role of director for weapons development and integration for the Aviation and Missile Research, Development and Engineering Center. A change of charter ceremony was held July 19 in Bob Jones Auditorium, where Pike handed over the leadership of PEO Missiles and Space to deputy PEO, Brig. Gen. Robert Rasch.

Pike served in various roles at PEO Missiles and Space and its predecessors, including program manager, chief of staff and deputy PEO, before taking over as PEO in January 2016. Although he will no longer walk through the doors at building 5250, Redstone is a small town and Pike said he looks forward to seeing many familiar faces at AMRDEC.

“This has been my home for about 30 years. But we have always worked with AMRDEC – they provide all of our engineers,” Pike said. “The big change is working more in the component technology arena as opposed to complete weapon systems. But I will still be interfacing with this organization. The position I am moving to does the science and technology for PEO Missiles and Space. So I will still be connected to the organization just in a different role.”

This is a year of change for Pike both professionally and personally. In addition to his new job, he and his wife Melanie will soon be empty nesters with their youngest daughter Julianna leaving for Auburn University in August. She plans to follow in the footsteps of her older sister Bonnie and pursue a nursing degree. Pike said the last several months have been spent focused on all the time-honored traditions of high school – prom and senior day and graduation – and he does look forward to his social schedule calming down, so he can get to work in his new role at AMRDEC.

Working at Redstone – and serving the country through its national defense – is a family tradition for the Hartselle native.

His father, an Army veteran, worked on Redstone Arsenal as a driver when Pike was a small boy. After he was killed by a drunk driver when Pike was 9, Pike said that without their church and his father’s military benefits, his family would have been “in a world of hurt.”

After his father’s death, an uncle stepped in as a father figure as Pike was growing up. That uncle, an Auburn graduate and AMRDEC employee, was a big influence on Pike and he followed in his uncle’s footsteps, majoring in chemical engineering at Auburn.

Pike said his entire career was in tribute to his father and uncle, and to the support he received from the Army.

“I consider it my responsibility and a labor of love to repay the Army for everything it has given to me,” he said.

After graduation, Pike went to work for a chemical company in Mobile but still had his sights on Redstone. He submitted his paperwork to both the Army and NASA and was hired by the Army. His first job assignment at the Strategic Defense Initiative Organization launched a career that would include work on many of the major missile defense systems employed in modern conflict.

Over his career, Pike served in a variety of leadership roles in the Army National Missile Defense Ground Based Elements Program Office from 1992-99, including the deputy program manager, chief of the Program and Acquisition Management Division, assistant program manager for Program Planning and chief of the System Engineering and Analysis branch.

He became chief of staff for PEO Missiles and Space and its predecessors in 2000 and served in that role until 2010 when he was selected for the Senior Executive Service and became the deputy PEO for Missiles and Space, serving until 2016.

“Mr. Pike literally knows everything,” Rasch said during the change of charter ceremony. “And he’s literally done everything.”

Looking back over his career, Pike said the most rewarding part of his many roles was “getting something through development and testing and into the hands of the Soldiers,” but often that process could also be the most challenging.

While some of the acronyms no longer exist, the jobs have changed and the technology modernized, Pike said that what has stayed steadfast was the high quality of people who make up the PEO Missiles and Space team. As leader of an organization that employs more than 2,000 employees and oversees an annual budget of $8.6 billion, it is not a job that anyone would ever say was easy or stress-free, but Pike credits the workforce which he called “phenomenal” for making his job easier with their expertise and dedication to the mission.

At the change of charter ceremony, Pike thanked his team but wasn’t quite ready to say goodbye.

“Since I am staying here, I am not leaving the Army, it didn’t really sound right to say goodbye. And it doesn’t quite sound right to say farewell because it sounds like, ‘good luck, you are on your own.’ I don’t intend that to happen as long as you need any help from the weapons development integration perspective. The best I could come up with was the way Bob Hope would put it: ‘Thanks for the memories.’ Army strong.”