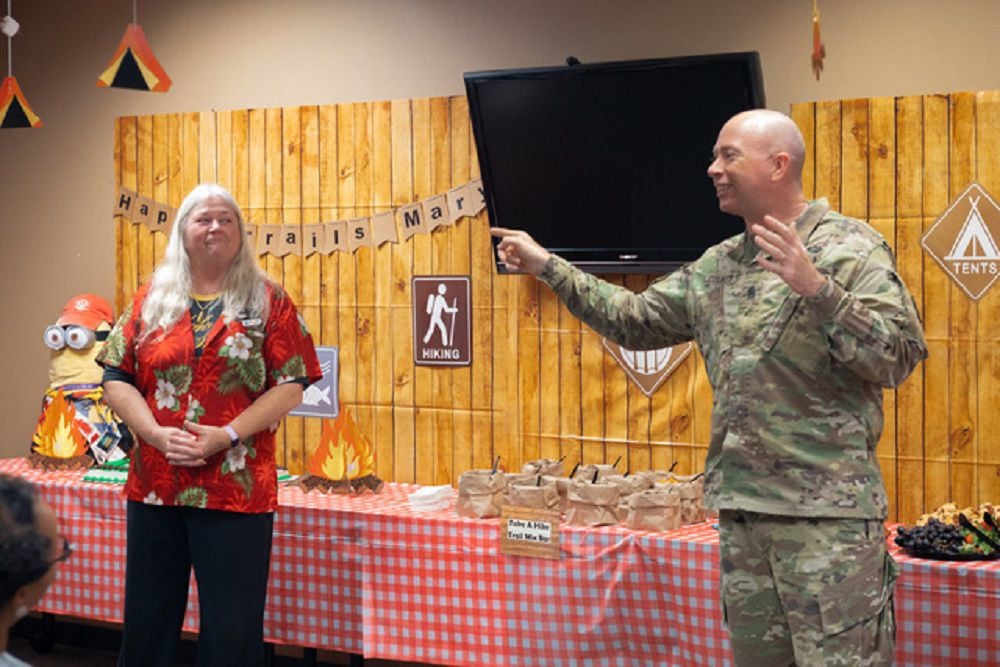 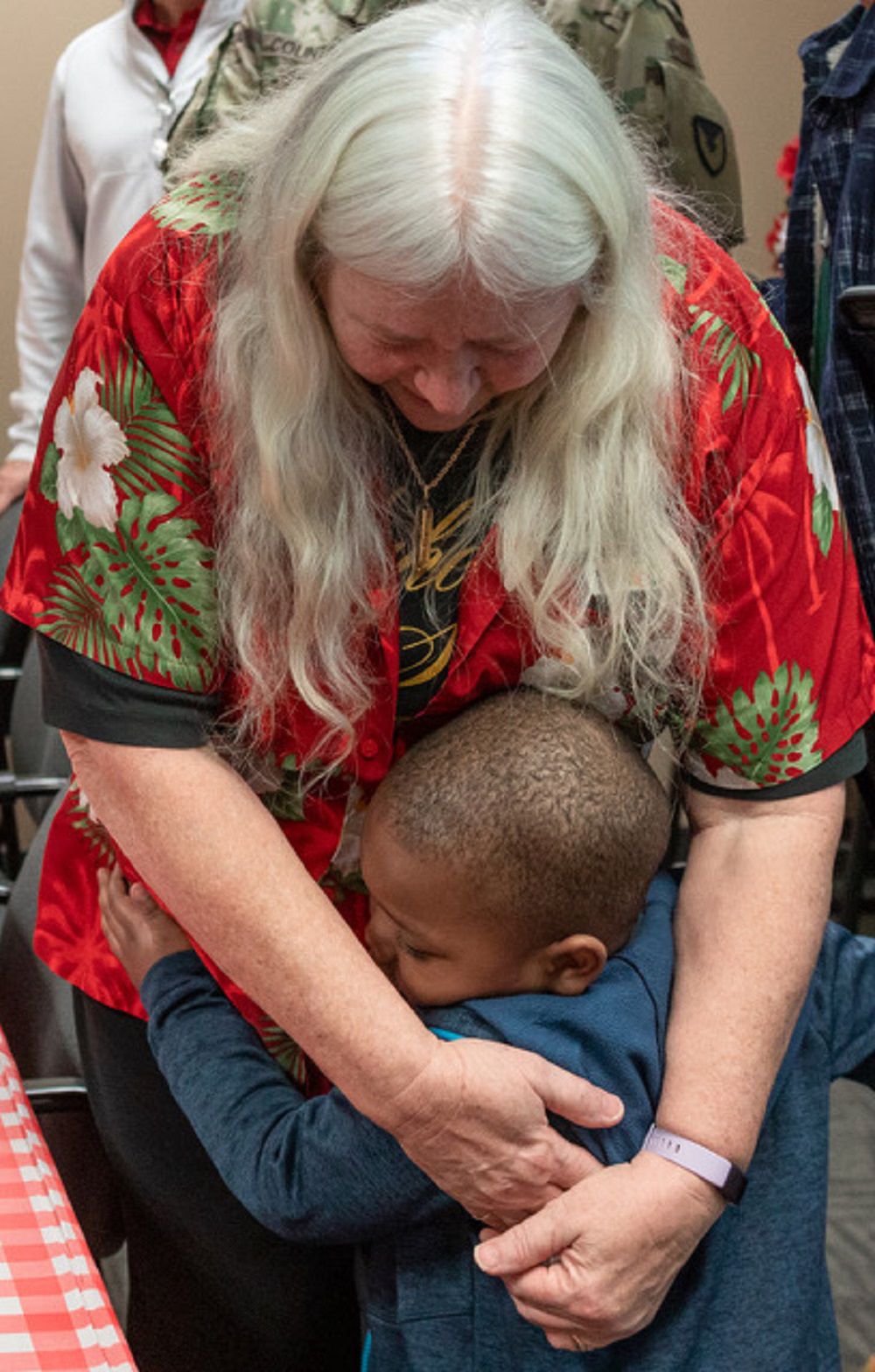 Mary Breeden is the self-described Queen Scout of Redstone Arsenal Trivia – who is helpful and friendly.

She’s been able to provide information on programs and services on Redstone in a single call. She’s made families stronger by linking them to available resources including citizenship, English as a Second Language classes and employment resources. She even defeated random phone calls and answered unexpected trivia questions.

That’s what happens when a career spans more than 30 years, most of it with Army Community Service. Even during her last day on the job, she continued to share helpful information while discussing the end of her career.

“It doesn’t make for a catchy theme song,” Breeden said of the super hero description as “Queen Scout.” She put together the description for herself in 2019 when the ACS team celebrated its 54th birthday on Redstone as super heroes.

She said her super power is to say what people are thinking, or simply speaking the truth. She’s also proud that she retired with her recognition as the Redstone Trivial Pursuit Queen title in tact.

On Jan. 29, the ACS staff held a retirement party for Breeden. Room 124 in the Pershing Welcome Center was packed with well-wishers from 2-3:30 p.m.

“Usually I tend to make babies cry from across the room,” she said. “His grandmother, Debra Jefferson, used to work at ACS. She told him I was the reason they were there for cake and that’s when he gave me a big ol’ hug.”

Another surprise came from Garrison Command Sgt. Maj. Billy Counts, who presented Breeden with a set of civilian retirement pins. She is the first person to be awarded the set of pins at Redstone Arsenal.

“It was pretty cool,” to get the pin set, she said.

Thinking back to how she got to ACS on the Arsenal, she said her journey with the military began in 1983 at Fort Hood, Texas, when she married Harry McKinley Breeden III, now a retired major. They have two grown children: a son, William, and wife Ashley; and daughter, Christina “Dr. Chris” Stantis, and husband Spen.

“I’m a fifth generation Texan and that’s where I got the tradition of helping your neighbors,” Breeden said. “Texans are always friendly, they want to brag about their state wherever they are at, and they want to help others – a lot.”

It wasn’t long before the Breedens landed in Pocatello, Idaho.

At the retirement party, Breeden shared how her career began by showing off a T-shirt that read, “Idaho State University ROTC – Pocatello, Idaho,” which she wore underneath her favorite red tropical print tour guide shirt she picked up on a vacation in Antigua.

“I got my start as a records clerk for Idaho State University ROTC,” she said. “The ROTC commander wanted to hire a military spouse … and he went out of his way to make sure he got a military spouse in the department and it turned out to be me.”

When the couple headed to Huntsville, it was because her husband had heard Redstone Arsenal was the best-kept secret in the Army.

“That was back in the day when it was a secret,” Breeden said.

Once here, she started working at ACS as an administrative assistant with family advocacy.

“As the years went by I kept taking on additional duties as needs came up. We all did. We had bosses who said, ‘Can you do it?’” Breeden recalled. “And we did it, and that’s how I became the relocation program manager.”

She said the journalism degree she earned at Texas A&M made it natural for her to ask nosy questions so she could find the resources a Soldier or one of their family members needed.

At this point, Breeden said she can’t help but think about St. Joseph The Worker Job Networking Club in Madison.

“They welcome everyone to meet on Tuesdays from 12:30 to 2 at St. John’s Catholic Church,” she said. “They give presentations on preparing for job interviews and it’s just a great program and resource for anyone looking for a job.”

Breeden can easily rattle off acronyms for classes and agencies on and off the Arsenal.

“It’s pretty easy to find things but as more organizations find out about Redstone and continue to come here the more we have to know about who is here,” she said.

Every day on the job for Breeden was new. It was never dull, and that’s why she loved going to work every day.

She said the reason she decided to retire was a practical one for the ACS team – an opportunity to hire someone to replace her.

“It’s a good time to leave when you know they can bring someone in to replace you,” she explained. Otherwise, she said, the responsibilities get added on to the other team members.

Plus her first grandchild is on the way. She and her husband have travel plans from Big Ben in England to Big Bend in Texas. She has scoutmaster duties with Troop 96 Scouts-Boy Scouts of America, based out of Epworth United Methodist Church in Huntsville. She would like to finally put her craft room at home to good use. And she will enjoy having more time for Pokémon hunting and getting exercise while she’s out walking with the game.

Jumping back to work, she said people can still drop off books for the ACS Free Library, and the collection of flags for retirement will still be offered after she’s gone.

On Friday morning, as Breeden started her last day at work, she had most of her office packed up. The walls were empty. The filing cabinets were empty. She was leaving behind some files with pertinent information related to what she has been doing.

She still had to move one of those filing cabinets to retrieve a puppet which had fallen behind it. She needed to clean the office, and she had to complete her final performance evaluation.

“I’m going to put the Scout oath in there, and an article from Texas monthly called ‘More colorful Texas sayings than you can shake a stick at,’ yeah, I’m going to stick that in there,” she said laughing. “Then I’ve got to get a shopping cart to tote all of my gear out of here.”

There were no goodbyes for Breeden, though. Her farewell to everyone is “Happy Trails … until we meet again.