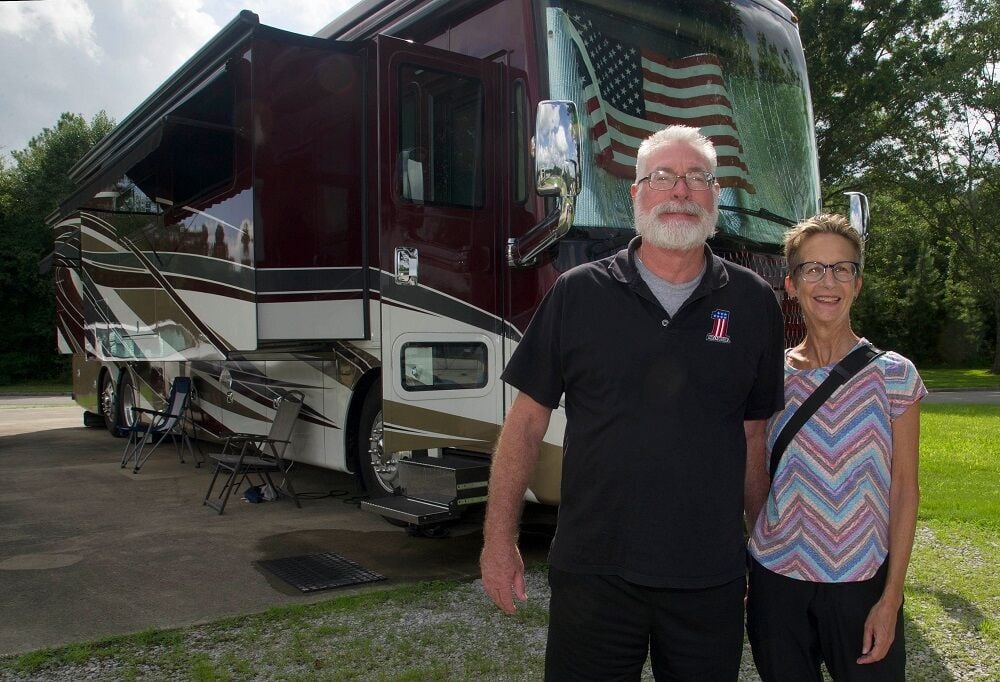 Cindi and Perry Ballard stand in front of their RV at the RV Park. 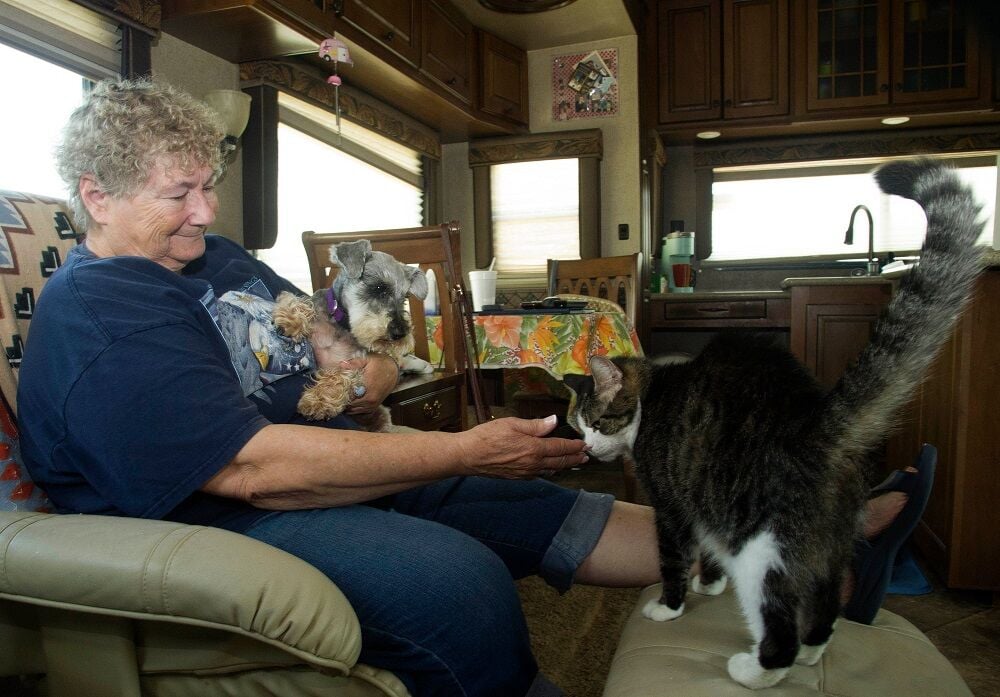 Melba King, a native of St. Joseph, Mo., holds her dog Angel with cat Tom Tom looking on in her recreational vehicle at the RV Park.

Cindi and Perry Ballard stand in front of their RV at the RV Park.

Melba King, a native of St. Joseph, Mo., holds her dog Angel with cat Tom Tom looking on in her recreational vehicle at the RV Park.

A fenced-in dedicated area for dogs, a neighborhood pavilion, a couple of bath houses and laundry facilities may sound like amenities for an upscale apartment or condominium complex.

But these are just a few of the benefits people enjoy at the Redstone Arsenal RV Park off Goss Road.

Whether they are there to work or to play, dozens of families are spending part of their summer on post living out of their recreational vehicles.

Yolinda Ellington and her husband Sherman, a retired sergeant first class who now works in security for Northrup Grumman, arrived at the RV Park on May 31 after driving from Anchorage, Alaska, where he had been working through the National Guard with Homeland Security.

The RV and its trailer, towing their car behind, was a total of 56 feet long, which created challenges for the couple, who took turns driving.

“That will make or break any relationship,” she said.

The Ellingtons have long planned to return to the area and have bought land in Ardmore, where they are in the process of building a home and enjoy closer proximity to her mother in Brewton.

The RV Park is their “in between” spot, Ellington said, and home is currently their 2007 National Pacifica Straight Liner. The couple, who together have four grown children, share the RV with their two chihuahuas, Tee Tee and Rascal.

Melba King, a retired Air Force master sergeant who also worked as a security police offer in the Air Force Reserves, lives full-time in her RV and divides her time between Huntsville and San Angelo, Texas, where her two grown children live with their families.

But prior to that, King, a native of St. Joseph, Missouri, took numerous trips in her RV, impressing many with her ability to manage everything herself, in the company of her two cats, Tom Tom and River, and 14-year-old schnauzer, Angel.

She has taken three major trips: one in the central and southeast states; another from Indiana to Maine and into the Canadian maritime provinces of Nova Scotia and Prince Edward Island (via ferry); and a third from Indiana to upper Michigan and Minnesota to Wyoming and Yellowstone National Park.

King owned a house for about 10 years in Millbrook after retiring from her last job at Maxwell Air Force Base.

“That’s when I finally got fed up with the house and the yard,” she said.

She now lives in a 40-foot Heartland Big Horn fifth wheel RV that she pulls with a Chevrolet Silverado 3500 dually.

When people realize she is RVing solo, they have a range of opinions, from “you must be crazy” to “you go, girl. It depends on who it is,” said King, adding that men often wish their wives had the same knowhow and will.

Cindi and Perry Ballard like to say they traded their four-bedroom house in Houston for a one-bedroom apartment with four television sets.

They live full-time now in a 45-foot 2017 Tiffin Allegro Bus fitted with a living room and two leather reclining chairs, a kitchen with a full-size refrigerator and two sliding “pantries,” one and a half bathrooms, a washer and dryer, and a bedroom with a king-size bed.

Perry Ballard, a retired Air Force lieutenant colonel, is currently on loan from Utah State University to NASA and working at the Space Dynamics Lab through the end of August. He works with DOD science experiments that are headed to the International Space Station.

The Ballards met in Cheyenne, Wyoming, and have been married almost 35 years.

They used to ride motorcycles cross country and first started RVing with a fifth wheel “toy hauler,” Perry Ballard said. “The back half is a garage.”

They now drive the bus on business and leisure trips that later land them back in Houston, where his job is based at Kennedy Space Center.

Everywhere they go, they meet interesting people, all of whom decide what level of socializing they want to do. At the Redstone RV park, campers enjoyed a cookout under the pavilion on the Fourth of July, Perry Ballard said.

During a recent tour of their RV bus, Cindi Ballard mentioned that she had a cake in the oven and a sewing machine in storage under the bed.

One of her favorite T-shirts declares she is a “glamping queen,” a phrase for a woman who enjoys glamourous camping.

The park is located off Goss Road and has 70 65x24-foot paved pull-through service pads with full hook-ups for 50/30 amp service, water and sewage.

The facility is available to active duty, retirees and Department of Defense civilians. For reservations or for more information, call Outdoor Recreation at 876-4868 or visit redstone.armymwr.com.