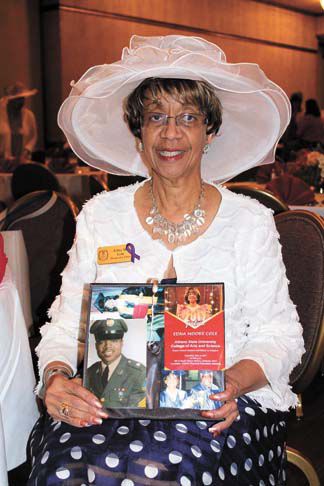 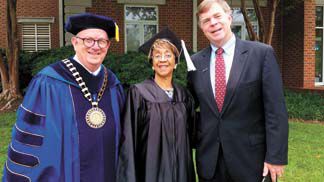 She plans to pursue her master’s in fall

Puzzled she thought to herself “Uh oh.” But then Glenn bestowed her a compliment.

Cole had taken one class per semester through the years until she achieved her bachelor’s degree at age 71, becoming a member of the class of 2017.

“She is the most young-at-heart,” Glenn said.

Cole, a Redstone resident since 2010, smiled and waved and enjoyed the crowd’s adulation. She wants people to know you’re never too old to follow your dreams.

“I think it’s fantastic. To God be the glory,” she said of receiving her diploma May 6 at the campus in Athens. “I want to continue my education. And I want the young people to know that you can do it, too. And I want the senior citizens to know that they should always work towards their goal.”

The Philadelphia native graduated from West Philadelphia High School in 1963 at age 16. In 1964 she started going to night school at Temple University and over the years attended Penn State. Cole received her teaching certificate from Harcum College, in Bryn Mawr, Pennsylvania, in 1996.

Cole worked for Prudential Insurance Company of America for 30 years until she retired in 1994. During those three decades, she kept taking one college class each semester on whichever night she could. In 2002 she married retired Sgt. Maj. Charles Cole, who had been her co-worker at Prudential, and they moved to his native Gadsden.

But her second husband grew ill and he died in 2004. Cole started attending Gadsden State Community College and she earned an associate degree in applied science there in 2009. She moved to Redstone in 2010 and began taking classes at the Athens State extension on post. The college allowed her to take one class per semester under a senior citizen plan.

Cole serves as honorary hospitality chairperson for both the Redstone Arsenal Community Women’s Club and the Legacy 4 Korean War Veterans Foundation. She and her late husband have a blended family of five children, 22 grandchildren and 25 great-grandchildren.

Her volunteer work in the community also includes helping the North Alabama Center for Educational Excellence, serving with a military re-enactment group and with the First Missionary Baptist Church in Huntsville. She got her bachelor’s from Athens State in arts and science, majoring in liberal studies with a minor in religion. She wants to start working on a master’s in the fall in counseling and sign language.

“I have to continue to learn how to be a good listener,” Cole said. Throughout her schooling, she pointed out, she never received federal financial aid. Her educational benefits were either through her job, the military or from a college’s program for senior citizens.

“God has blessed me to be able to go through (school),” she said. “And that’s a blessing.”