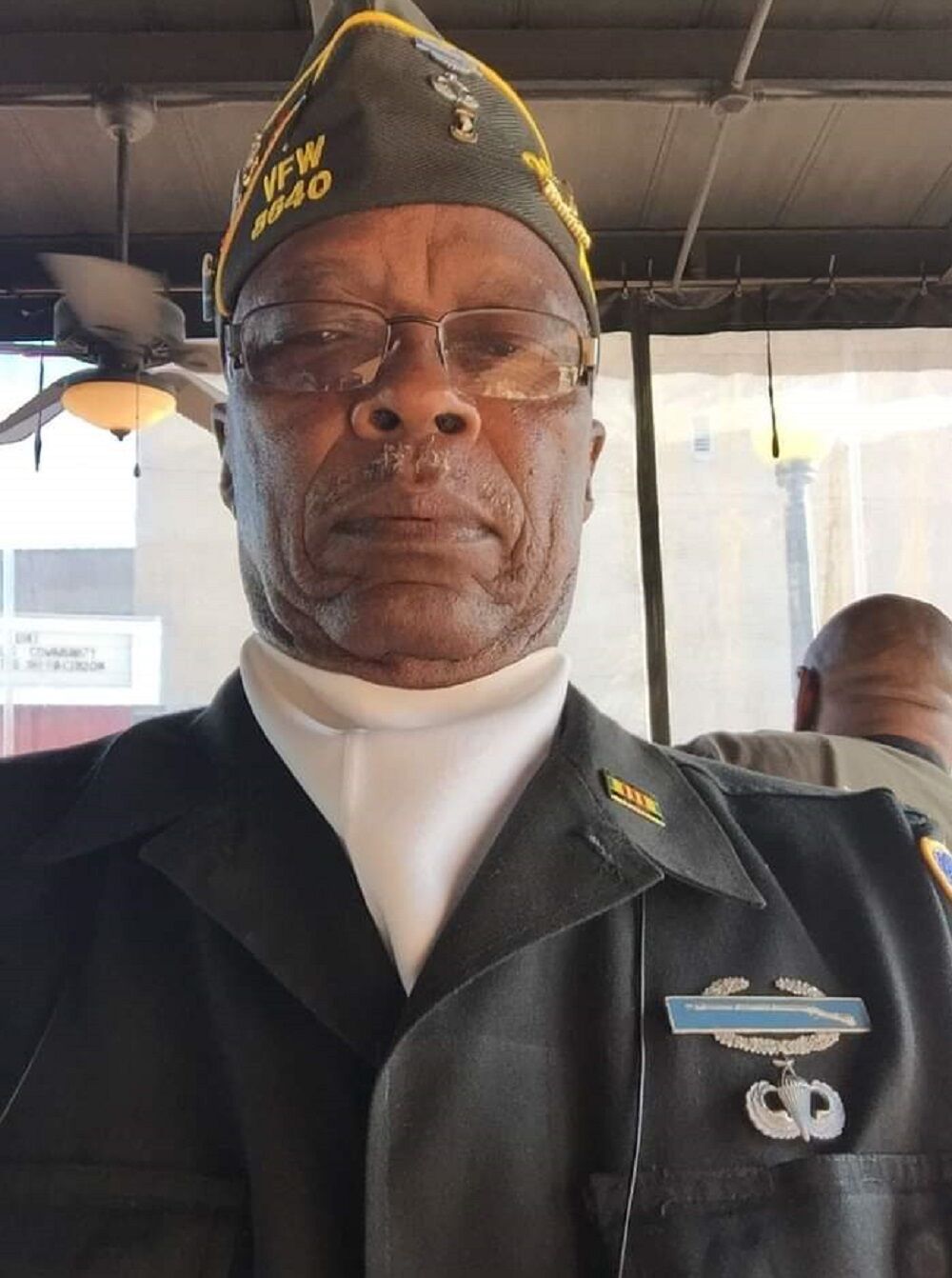 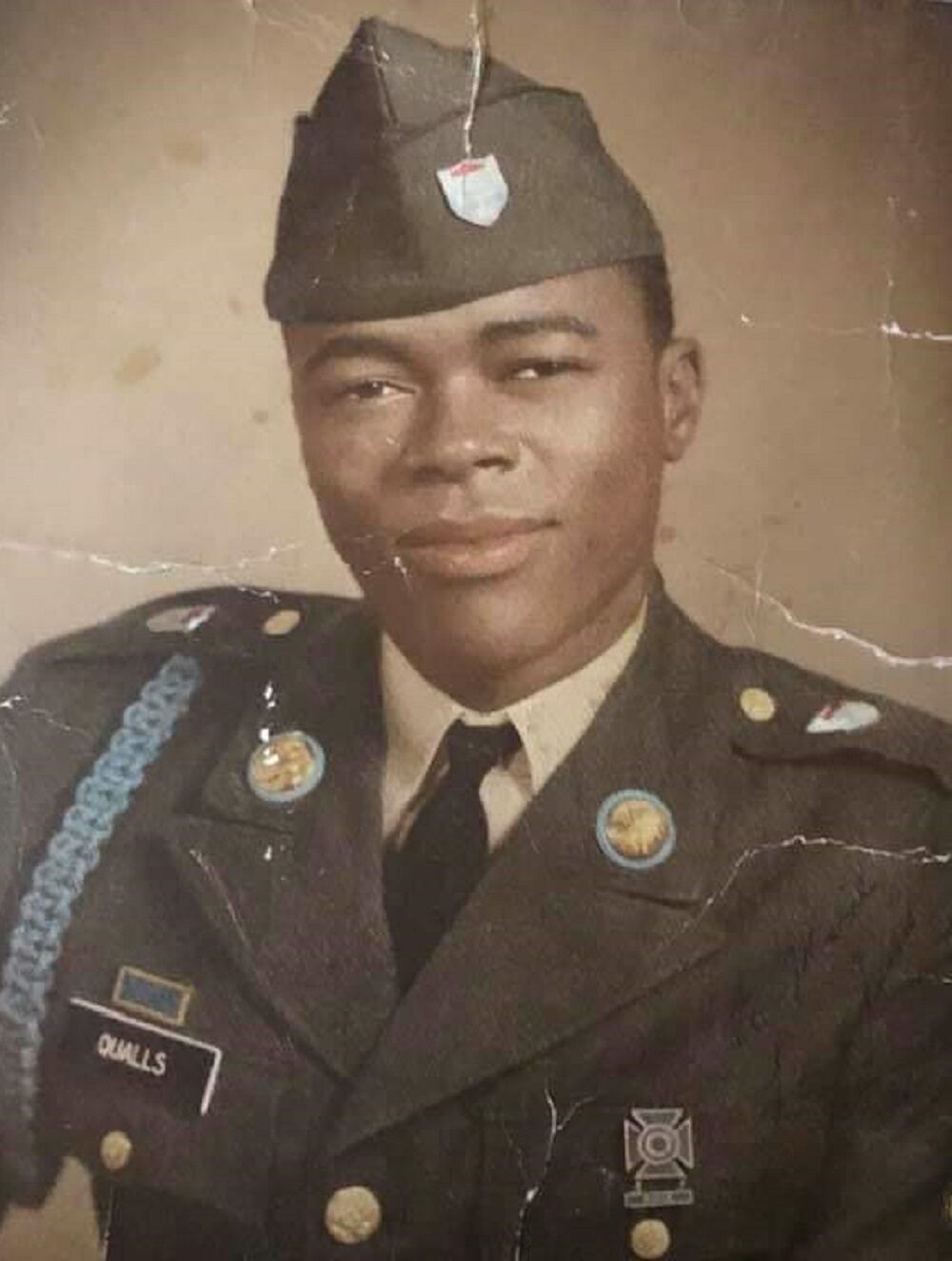 Disabled veteran Jessie Qualls likes being a disc jockey in his native Shoals. You can tell by his colorful description of his combat tour in Vietnam, 1965-66.

“Like walking through hell with a pair of gasoline-soaked drawers on,” he said. “That’s exactly the way it felt like.”

Qualls was an automatic weapons squad leader with Bravo Company, 1st Battalion, 502nd Airborne Infantry Strike Force, 101st Airborne Division, from March 1965 until July 1966. Initially he was in Cam Rahn Bay. From there he went to the central highlands up to An Khe and to Kon Tum Province.

When his company went out on their nightly patrols, his 12-member squad provided the automatic weapons fire. The 22-year-old specialist four carried an M60 machine gun, an Army .45-caliber pistol and a 12-gauge shotgun.

“Every night we’d go out on patrols and go out on search-and-destroy missions,” Qualls said.

On Sept. 18, 1965 in An Khe, on his second combat mission, he got hit in his side by shrapnel during Operation Gibraltar. But he stayed in the field.

In the Battle of la Drang Valley, Nov. 14, 1965, Qualls was there. It was the first major battle between the U.S. Army and the North Vietnamese army.

“We were sending out automatic weapons fire in support of that,” Qualls, who was in the valley with his unit, said. “We were engaged for 31 hours, the whole entire time the battle was on. And we lost a lot of casualties.”

He didn’t get much sleep during his year at war.

“I remember it was hot. It was wet. And we stayed engaged most of the time we were there. We stayed engaged with small arms infantry fire,” he said. “And the smell of death and gunpowder, and explosives. And not being able to sleep.”

But when he returned to the U.S. and landed in San Francisco in 1966, he was met by violent protesters. They were throwing bricks and rocks and calling the returning troops “baby killers.”

The protesters killed a Marine.

“I was just trying to get home to my wife and my firstborn,” Qualls said. “That’s what I was thinking about, and just fortunate I made it.”

The native of Leighton, in Colbert County, dropped out of school and joined the Army at 16. He was the third oldest of seven children – five girls and two boys. His twin sister forged his parents' names so he could enlist before his 17th birthday. He passed all the tests, and the Army sent him to Montgomery for his induction. While he was in Montgomery, his sister confessed to their parents what she had done. “I got a really disparaging phone call from my dad,” Qualls said. “I said, ‘I’m grown now, I’m in the Army.’ He said ‘You ain’t grown.’ He started chewing on my butt. He said ‘Are you sure this is what you want to do?’ I said yes. So that’s how my career started.”

Qualls was stationed at Fort Benning, Georgia, and then went to Korea with his unit and was there from 1960-61. He said reality set in when he went to Vietnam in 1965. He left the Army in 1968 as a sergeant.

The Florence resident eventually got his GED and had about two years of college. His first job after the military was with Reynolds Aluminum in Sheffield. Next he drove a tractor trailer for nearly 30 years until his post-traumatic stress disorder became too much. With shrapnel wounds, prostate cancer and PTSD,

he said he has a 280% disability rating from Veterans Affairs.

He and his wife of nearly 60 years, Annie Pearl, have three children and two grandsons, all residing in Florence. Their son, Christopher, the oldest, has a lawn mower service. Their oldest daughter, Rosalinda, is a labor and delivery nurse at Decatur General Hospital. Their younger daughter, Tawana, works from home as a computer programmer. Their grandson Ben, Rosalinda’s son, is 21; and their grandson Emmanuel Colman, 26, is Christopher’s son.

Qualls, 78, is commander of Veterans of Foreign Wars Post 8640 in Sheffield. He is also first vice president of the tri-county branch of the NAACP and he serves as chairman of the state’s NAACP military and veterans affairs committee. On the third Sunday of each month, he does a radio broadcast on WZZA AM-1410 in Tuscumbia for veterans updates, church schedules and church music. As a sideline, he disc jockeys for parties.

“I think it’s way past due to be commemorating any portion of the Vietnam War history,” he said. “And I’m just proud to be alive during this period to be able to talk about it. I’m very blessed to be here.”

Editor’s note: This is the 317th in a series of articles about Vietnam veterans as the United States commemorates the 50th anniversary of the Vietnam War.