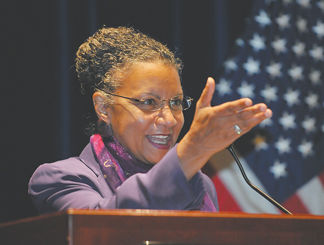 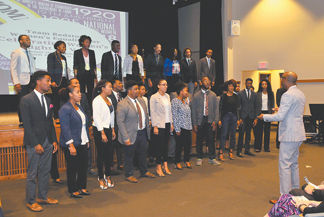 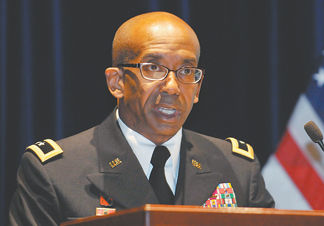 The foundation of the United States rests on “government of the people, by the people, for the people.” The inclusion of all people in that foundation has been a perilous journey.

Members of Team Redstone gathered Aug. 26 to celebrate Women’s Equality Day and the 95th anniversary of women gaining the right to vote. On Aug. 26, 1920, the 19th Amendment to the U.S. Constitution went into effect, allowing women the right to vote after decades of campaigning by suffrage workers. The Army Contracting Command hosted the event at Heiser Hall, with musical entertainment provided by the Aeolians of Oakwood University.

“I can’t think of a better place to celebrate Women’s Equality Day than here where all of you work to protect our democracy,” author A’Lelia Bundles, keynote speaker for the event, said.

Bundles has more than 30 years of experience in the journalism field. She is the chairman of the board of the National Archives Foundation and the author of “On Her Own Ground: The Life and Times of Madam C.J. Walker,” named a Notable Book by the New York Times. Bundles is a graduate of Harvard College and Radcliffe College, received a master’s from Columbia University’s Graduate School of Journalism and an honorary doctorate from Indiana University.

Bundles walked the crowd through the last 100 years of women’s history, noting the many women who have blazed trails through their chosen fields, making their marks in the worlds of science, government and industry. She made a point to acknowledge a woman who played a part in the history of Redstone Arsenal, retired Gen. Ann Dunwoody, former commander of the Army Materiel Command and the Army’s first female four-star general.

She said while women have come a long way in the last generation, rights are often not absolute and women must continue to strive for equal treatment, equal pay and equal responsibilities, being inspired by the work of others before them.

“We take (the right to vote) for granted,” Bundles said. “This is something that we should cherish.”

Bundles concluded her speech with a quote from her great-great-grandmother, Madame C.J. Walker, one of the first African-American female entrepreneurs and a pioneer in the cosmetics industry.

Redstone Arsenal is committed to celebrating the heritage of the diverse workforce that makes up Team Redstone. The next observances will be the Hispanic Heritage Month Observance, Sept. 30, and the Native American Heritage Month, Nov. 18.