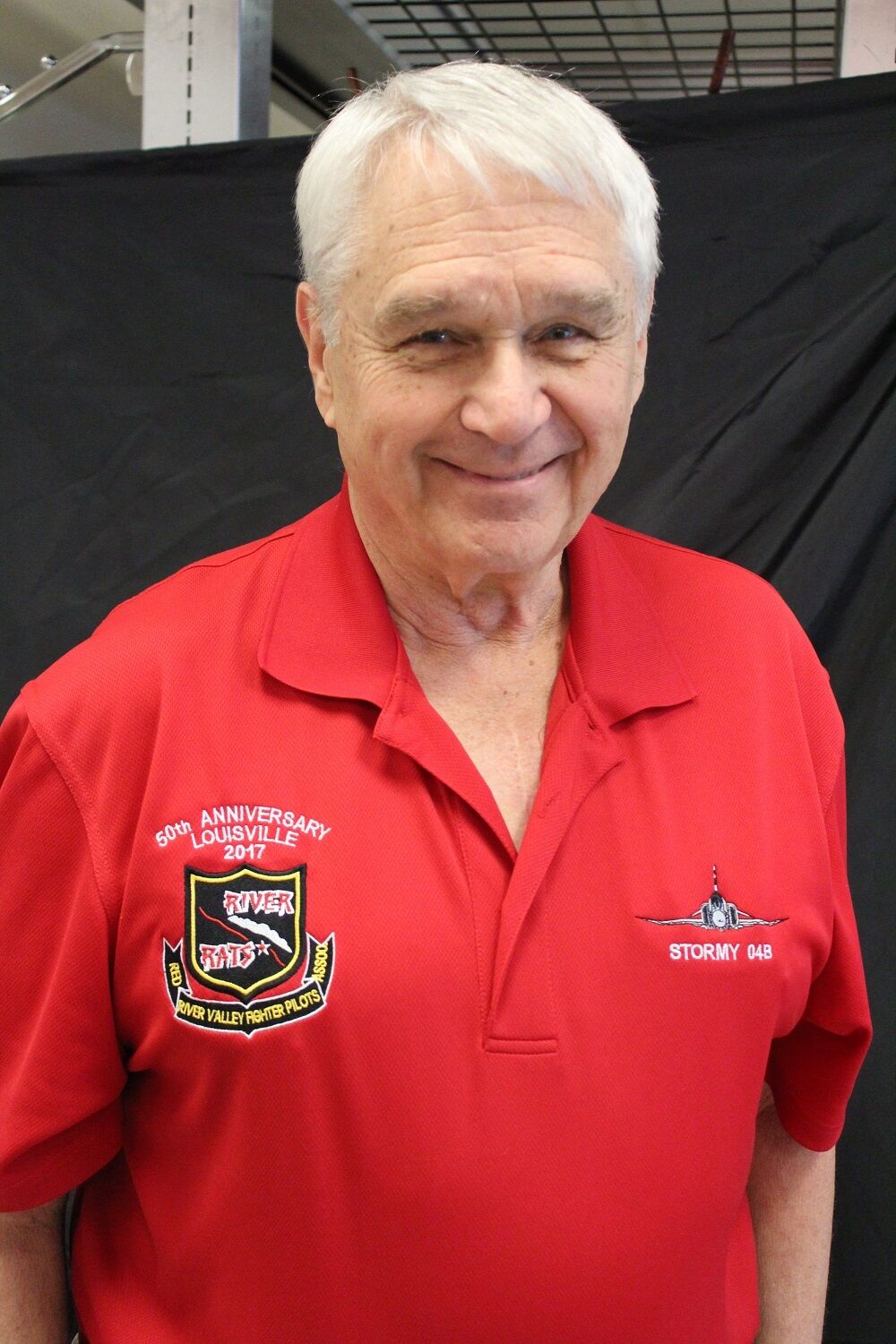 Zygmund “Zig” Jastrebski, a retired Air Force major, was a weapon systems officer on an F-4 Phantom from 1972-73 in Vietnam. 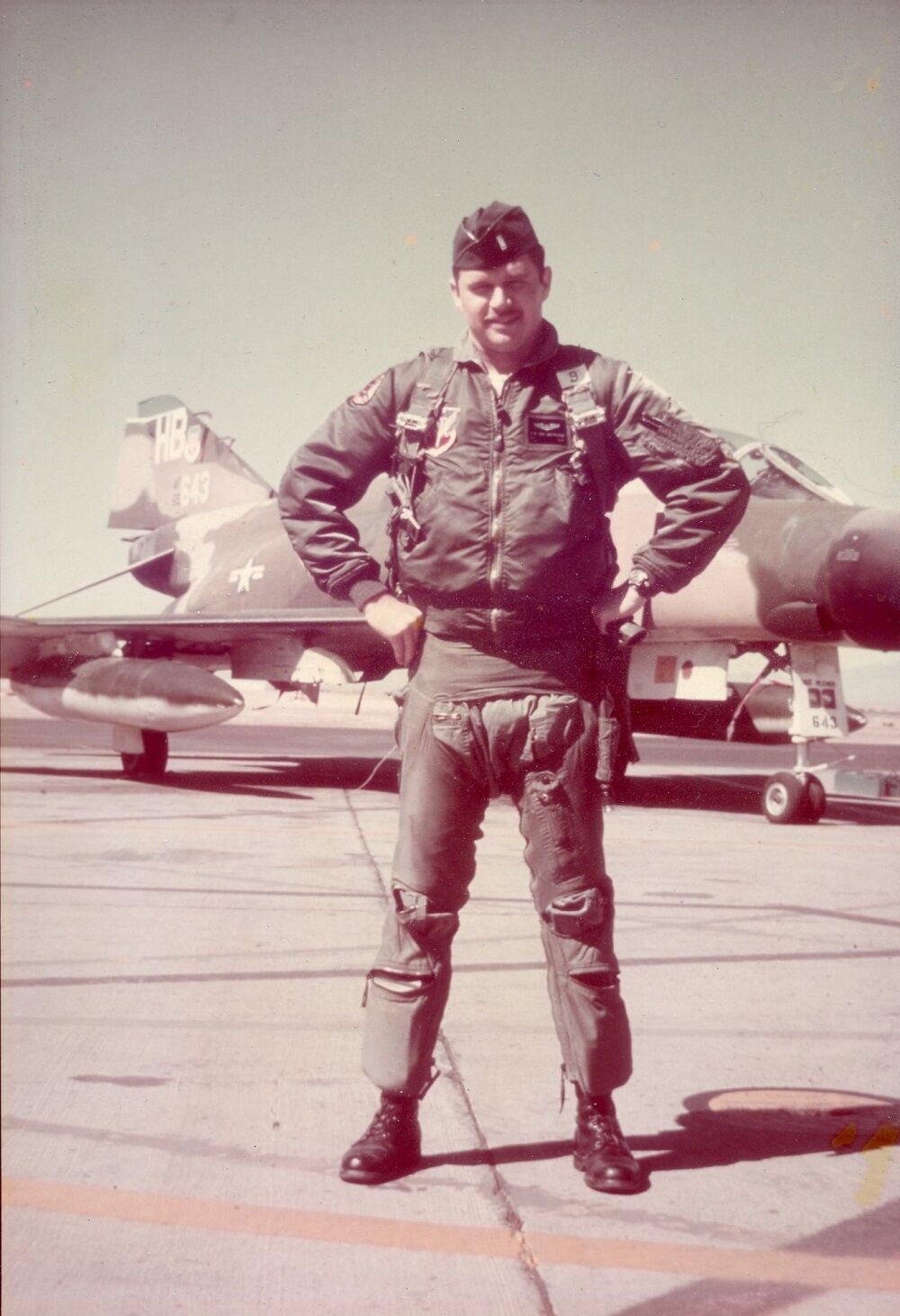 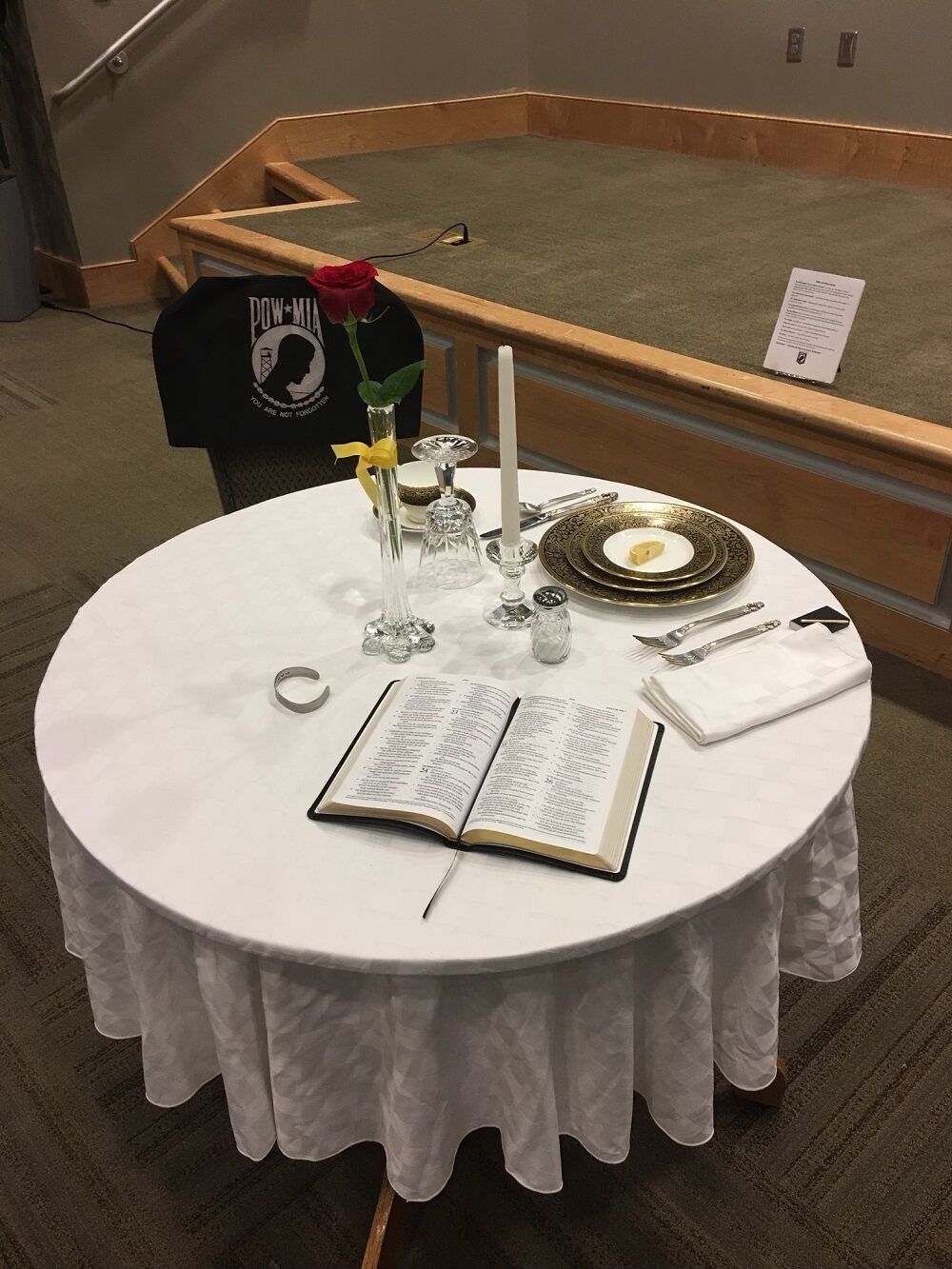 The empty seat in the white table ceremony signifies a pilot missing in action or held prisoner of war.

Zygmund “Zig” Jastrebski, a retired Air Force major, was a weapon systems officer on an F-4 Phantom from 1972-73 in Vietnam.

The empty seat in the white table ceremony signifies a pilot missing in action or held prisoner of war.

The tradition goes back to 1967 as a way of remembering and giving tribute to American pilots who were lost in the Vietnam War. The ceremony is personally significant to

Zygmund “Zig” Jastrebski, who experienced the war from the back seat of an Air Force F-4 Phantom fighter.

“A lot of remembrance of people that I lost in Vietnam. Friends,” he said. “To remember those people especially with what’s going on today.”

The organization now has more than 4,000 members and has raised $4.5 million for scholarships over the last 30 years. It is building a museum in Bowling Green, Kentucky. The association conducted its first reunion in 1973. Jastrebski stays in touch with some of his fellow fliers from Da Nang like Dave Grant, a South Carolina resident who was his front-seat pilot early in the war. They flew numerous combat missions until one time when Jastrebski and Grant were not flying together. Grant was shot down and became a prisoner of war in North Vietnam.

Both men attended the annual reunion of the Red River Valley Fighter Pilots Association held in April 2019 in Charleston, South Carolina. The white table ceremony was among the events. The tradition is described in a children’s book, “America’s White Table,” by the late Margot Theis Raven.

Jastrebski was a weapon systems officer in an F-4 fighter in Vietnam from January 1972 through January 1973 with the 421st Tactical Fighter Squadron, the “Black Widows.” He arrived in Da Nang as a 25-year-old Air Force captain in the midst of Vietnamization, the U.S. policy of withdrawing its troops and transferring the responsibility of the war effort to the government of South Vietnam.

“So I fought the entire war from the Easter Offensive of ’72 all the way up to Linebacker One and Linebacker Two,” said Jastrebski, whose squadron moved to Udorn Air Base, Thailand, in October 1972.

He flew more than 200 combat missions in one year in Vietnam. These missions included bombing, air-to-air engagements against enemy MiG fighters, and forward air controller missions in North Vietnam to find targets for the bombers.

His combat missions started as soon as he arrived in January 1972 and continued until the first week in January 1973. He flew missions both during the day and night.

“Normal missions, when we went to Hanoi, would be about three or three and a half hours with a minimum of two air-to-air refuelings,” Jastrebski said.

The retired major gives speaking engagements where he describes the magnitude of the U.S. bombing missions. By Christmas 1972, there would be as many as 100 B-52s and 50 F-4s in the air over North Vietnam at the same time.

Jastrebski described “the good, bad and the ugly” of his yearlong Vietnam experience.

“Some of the flying was the best flying I’ve ever done,” he said. “The bad side was we lost a lot of folks. I lost roommates, and good friends. But, if you’re a professional fighter pilot, that’s what you trained for. You learn to live with the good and the bad.”

Later in his career, he would share his perspective as an air combat veteran to his counterparts who had never experienced war.

He was never shot down but his aircraft did take battle damage on numerous occasions.

“I’ve never ejected from an F-4 Phantom, but I came close a couple of times,” Jastrebski said.

Some of his vivid memories include seeing the beautiful countryside from above. He remembers seeing the Halong Bay in North Vietnam.

For his combat service, Jastrebski received the Distinguished Flying Cross with four oak leaf clusters and the Air Medal with 17 oak leaf clusters. He was inducted into the Madison County Hall of Heroes in the early 2000s.

Like many returning Vietnam veterans, he remembers an unwelcome incident. His occurred in early 1973 on a skiing trip in Park City, Utah. While riding up the mountain on a ski lift, the man sitting next to him realized he just returned from Vietnam and said, “Oh you’re one of those babykillers.”

The Inglewood, California, native joined the Air Force in 1968 with the draft looming. He graduated from California State University, Long Beach in 1967 with a bachelor’s in geography. In the Air Force, he went to Officer Training School and received subsequent flight and F-4 training before going to Vietnam. After Vietnam he went to Homestead Air Force Base, Florida, married and continued with his Air Force career. He received a master’s of science in management from Florida International University in 1976.

After more than 2,000 hours flying the F-4 Phantom and a few staff tours, he retired from the Air Force in 1988 at Ramstein Air Force Base, Germany, with more than 20 years of service. His subsequent career in the defense industry in Huntsville ended nine years ago when he retired from Engility Corp, formerly L-3 Communications, as the director of command, control, simulation and interoperability.

Jastrebski, 77, resides in Huntsville with his wife of 45 years, Virdia, and he enjoys an occasional round of golf. They have two daughters – Alycia Babinchak of Boca Raton, Florida, and Margaret Jastrebski of Chicago – and three grandchildren.

He is a member of the Air Force Association, the American Legion, the North Alabama Veterans and Fraternal Organizations Coalition, and the Red River Valley Fighter Pilots Association. He was named Veteran of the Year in 2018 by NAVFOC, and this distinction was recognized in a resolution that year by the Alabama House of Representatives. Jastrebski serves as vice president of the Madison County Military Heritage Commission which maintains the Madison County Hall of Heroes display at the Courthouse downtown. He is an emeritus military docent at the Aviation Challenge camp of the U.S. Space & Rocket Center.

Jastrebski shared his thoughts on this nation’s commemoration of 50 years since the Vietnam War. He said it is important “to recognize what our veterans gave and what they’ve done.”

Editor’s note: This is the 335th in a series of articles about Vietnam veterans as the United States commemorates the 50th anniversary of the Vietnam War.