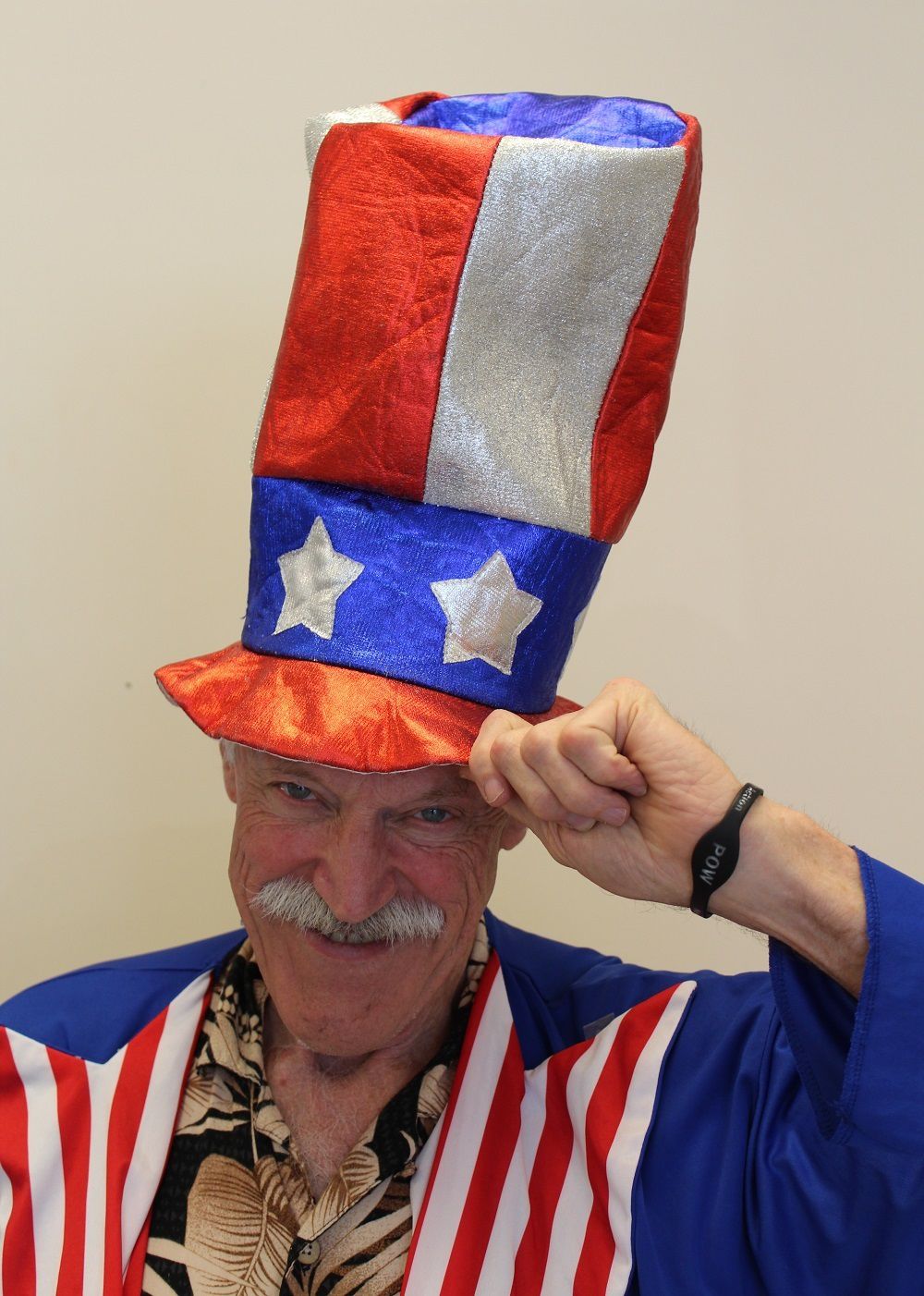 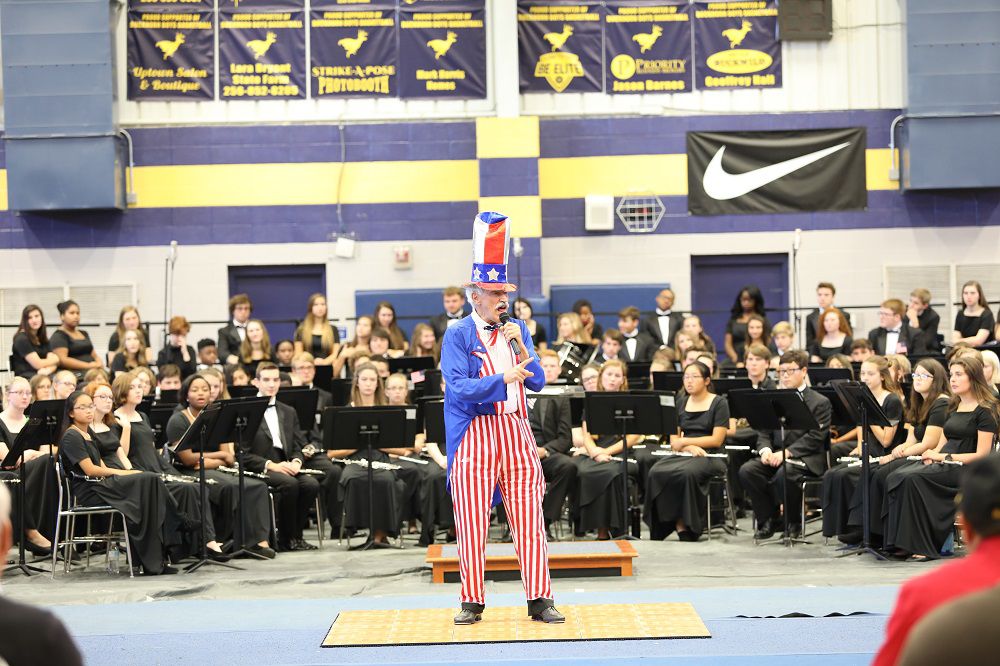 Vietnam veteran Dave Dunlap is still available to sing and tap dance while performing as Uncle Sam. But cancellations from the pandemic have definitely impacted his schedule.

Dunlap developed his patriotic education show, “The Shaping of Uncle Sam,” in 2014. Since then he has done 94 shows in 14 states. The show usually runs about 40 minutes. His last one was for the Austin High School JROTC in November 2019 in Decatur. Several trips and events have been canceled since March.

“I haven’t been actively seeking new gigs,” he said. “Basically I try to work with schools. So when the schools closed, I just threw my attention to the workload I had around the house.”

He added with a laugh, “I haven’t done a show with a mask on yet.”

Dunlap, born in Spokane, Washington, grew up in Gulfport, Mississippi. He went to Long Beach High School in the Gulfport area. He was from a military family. His father, a World War II veteran, medically retired from the Navy as a commander after 27 years of service. His older brother did two tours in Vietnam with the Marines. His younger brother graduated from the Naval Academy while Dunlap was in Vietnam and went on to serve in the South China Sea.

He sang in the church choir with his mother and he did plays in high school. Dunlap said he wasn’t doing well in college and “needed a sabbatical” so he volunteered for the draft. He entered the Army in 1970 and went to Vietnam as a 22-year-old private first class. He became an infantryman in Charlie Company, a light weapons platoon, in the 1st Cavalry Division in “the bush and remote firebases,” he said. Bien Hoa was his battalion’s rear location but he said he was only there twice other than when he was medically evacuated. The roles he served included walking the point, the second in line with the compass, assistant gunner, machine gunner and as a squad leader for three months.

“It kicked my butt. I grew up. I learned to love myself,” Dunlap said. “I also learned to take more responsibility for myself. But I also left with survivor’s guilt. I wrote a lot of stuff off because I survived and some people hadn’t.”

He said he was lucky to survive three incidents, including a major ambush June 15, 1971. His unit was called to retrieve a company which had been ambushed but found itself attacked by North Vietnamese soldiers entrenched in bunkers, hidden in triple canopy jungle. Dunlap’s 30-man platoon lost one killed and 14 wounded. A 100-pound crate left a volleyball-sized bruise on his back. That happened when a helicopter swooped in with resupplies during the firefight.

In May 1971 he and his fellow Soldiers were flown to Fire Base Mace, about 40 miles from Bien Hoa, for a USO show featuring Miss America contestants. But Dunlap wasn’t impressed by their performance. “It was played off a tape recorder,” he said. “They were lip syncing.”

He thought to himself that he could do better. About four months later, the Soldiers were watching a movie which was interrupted by a mortar attack. “A guy and I got up and did an impromptu vaudeville show and that was a hoot. I’ve been into it ever since,” he said.

Dunlap, who served in Vietnam from December 1970 to January 1972 and left the Army as a sergeant, remembers returning to the states in uniform at the San Francisco airport. A teenage girl rushed up to him and called him a “baby killer.”

“I was proud of what I’d done up until that point,” Dunlap said.

He went to work for a year and then finished school. He received his bachelor’s in industrial engineering in December 1973 from Mississippi State University and started pursuing a master’s. He received a commission through ROTC and became an Air Force second lieutenant. He went on active duty in December 1974 and retired from the Air Force as a lieutenant colonel in 1994.

“Participating in Tops in Blue, the Air Force-wide talent contest, I got two first place and a second place at base level in 1976, ’77 and ’78,” Dunlap said. During a rehearsal in Tops in Blue, he had the opportunity to perform with the Air Force Band. The band played Yankee Doodle Dandy while Dunlap tap danced and sang.

After his Air Force career and three years as a student, he worked 12 years as an engineer for Teledyne Brown. He left in 2009 as a senior systems analyst.

“I appreciate it,” he said of this nation’s commemoration of 50 years since the Vietnam War. “I also have participated in some of the activities as a member of MOWW and the VVA Huntsville chapters.”

His wife of more than 31 years, Sandra Johnson Dunlap, died in 2014. His stepson, Richard Bell, and his younger son, Howard, reside in Somerville. His daughter, Susan Short, lives in Nashville. He has two grandchildren, including a grandson in the Air Force.

“We – well some of us – sang a lot while at firebases,” he said of his yearlong tour in Vietnam. “Man, that’s freedom. You go to a firebase, that’s freedom. I mean, man, let your lungs go when silence discipline is not in effect.”

Editor’s note: This is the 276th in a series of articles about Vietnam veterans as the United States commemorates the 50th anniversary of the Vietnam War.