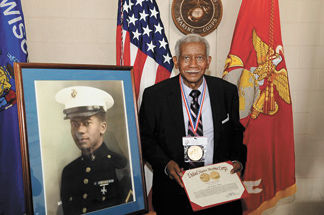 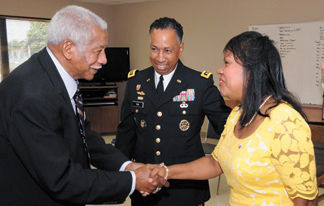 Approximately every three minutes a memory of World War II – its sights and sounds, its terrors and triumphs – disappears. Yielding to the passing of time, the men and women who fought and won the great conflict are now mostly in their 90s.

Ray Williams, native of Huntsville, is one of the few living veterans carrying the memories of WWII and the desegregation of the military.

Born and raised in poverty in New Orleans, he voluntarily enlisted in the Marines in 1946.

“I went in because I wanted to get the G.I. Bill. I wanted to go to college,” said Williams, who was 18 at the time. “My mother died when I was 2, and my father and sisters raised me. We didn’t have much. I saw the Marines and the G.I. Bill as opportunities to make a better life for me and my family.”

He joined the Marines partly because his older brother joined the Navy.

Williams would turn out to be one of about 20,000 African-Americans who were trained as Marines at Montford Point between 1942 and 1949.

In 1947, he was trained on Onslow Beach at Hadnot Point, Camp Lejeune, as a crewman for the 90 millimeter heavy anti-aircraft gun. As missile and rocket technology diminished the use of the 90 millimeter, Williams was retrained as a military police officer, and moved up the ranks to corporal.

“There was some tension the first night we were there. But then they accepted us,” Williams said of the white Marines at Hadnot Point.

While at Hadnot Point, the differences in living conditions for white and black Marines became evident to Williams. At Montford Point, Marines lived in wooden barracks with concrete floors, had outhouses for bathrooms, no washing machines and pot belly stoves for heat. At Hadnot Point, living conditions included brick buildings with tile floors, bathrooms in the buildings, and air conditioning and heating units.

“I’ve seen the hard part and the good part of the Marine Corps. Believe me, there was a difference,” Williams said.

He later reported with his platoon for military police duty at the Naval Ammunition Depot Marine Base in Earle, New Jersey, helping to also integrate that installation.

As a military police officer, Williams helped to guard the installation, search and guard ships entering the port and oversaw prisoners at work details. Integration and what that meant for the future was far from his mind in those years.

“We were just trying to do our jobs. That’s what we were trained for. We weren’t thinking about integration. We just wanted to do our jobs,” Williams said.

“Integration went so smoothly and quietly in the Marines. I’ve gone through a lot of books about the history of the Marines, and it’s hard to find out about the 1946 integration.”

Initially, when African-Americans were first allowed to serve in the Marines, leadership had planned to discharge them at the end of World War II and go back to an all-white Marine Corps. But African-Americans proved themselves in war and, with attitudes changing, it became impossible to deny the right of service to anyone based on race, color, creed or national origin.

Williams left the Marines after two years of service with a World War II Victory Medal and sharpshooter badge to his credit, and hearing damage in his left ear caused by the firing of the 90 millimeter anti-aircraft gun. He left the Marines to pursue his dream of a college education, although he considered re-enlisting.

He went on to get his business and secondary education degrees from Xavier University in New Orleans in 1952. He taught in New Orleans schools, and worked at NASA’s Michoud Assembly Facility in New Orleans, where he supervised the space program’s command center. He was also an entrepreneur in the grocery business.

Williams was married to his college sweetheart for 53 years until her death. They had seven children, who are all college graduates and working professionals. One son is a retired Air Force lieutenant colonel. He has 11 grandchildren and three great-grandchildren.

In 1999, Williams moved to Huntsville, where one of his daughters, who is married to NBA Hall of Famer Alfonso “Buck” Johnson, also lives. He has been an entrepreneur in Huntsville and even made an unsuccessful run for the Alabama Senate.

In November 2011, the Montford Point Marines were awarded the Congressional Gold Medal – the highest civilian honor bestowed by Congress for distinguished achievement – for service that led to minorities and women being integrated into the Marine Corps.

Because of illness, Williams was unable to attend the awards program hosted by President Barack Obama in Washington, D.C., on Nov. 23, 2011. Instead, his medal was awarded to him by members of Kilo Battery, 2nd Battalion, 14th Marines in Huntsville on Sept. 15, 2012. Among those who attended was Gen. Dennis Via, commander of the Army Materiel Command and the first African-American four star general of the Signal Corps, and his wife, Linda.

With the Congressional Gold Medal award ceremony at Kilo Battery, Williams now has closure to his time serving as a Marine during the corps’ integration.

The Marine Corps is now implementing initiatives to teach today and future Marines about the contribution of the Montford Point Marines.

“The Marines and all the services have improved so much. I am so proud to be a part of that improvement,” Williams said. “It’s different now. They’re all together, and I can see (African-American) Marines like 1st Sgt. Jonathan Dillard of Kilo Battery and Army Soldiers like Gen. Via and know that in some way I’ve helped them along the way.”