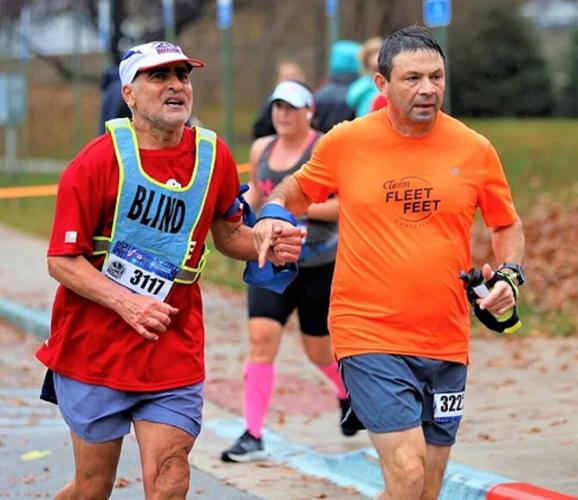 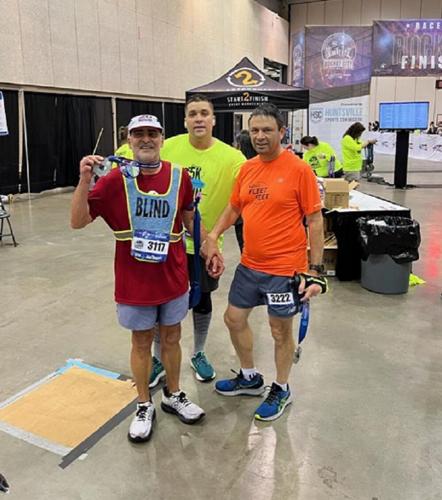 Vietnam-era veteran Jose Centeno doesn’t let blindness stop him. The avid runner doesn’t let it slow him down either.

The Dayton, Ohio, resident traveled to Huntsville in December and finished the Rocket City Half Marathon in two hours and 29 minutes. His guide for the first eight miles of the 13.1-mile race was his nephew Giovanni Centeno of Huntsville. Four months before the race, he asked if his nephew would be willing to train for the half marathon. Centeno signed up when his nephew agreed.

“I don’t let my blindness get me down,” he said. “I know it’s a challenge and I’m always looking forward to running especially with a guide. With someone running alongside of me.”

He mentioned the many Rocket City runners who posted photos of him and his guides on Facebook. A female runner told him she was walking until she saw him with his vest identifying him as a blind runner. She said she got inspired and started running again. Spectators got teary-eyed when they saw him cross the finish line.

“I’m blessed that I’m able to do that as a blind runner,” he said. “And I’m going to continue to support different charities and organizations.”

Centeno, 67, has run in support of the American Cancer Society, the Leukemia Society and breast cancer research.

He joined the Marines in December 1973 and he retired at the end of 1994 as a gunnery sergeant after 21 years of active duty. He has lived in Dayton since 1988. In 1996 he was hired by the U.S. Postal Service. But in August 2015 he started losing his vision because of glaucoma.

“I’ve been running kind of all my life even after being blind,” the New York native said.

In November 2016 Centeno ran the Inland Trail Marathon, in Elyria, Ohio, with Team Red, White and Blue and qualified for the Boston Marathon as a blind runner. He finished in 4:35. A blind runner can qualify for Boston by finishing in under five hours. Centeno finished the 2017 Boston Marathon in 4:41.

Last Oct. 8 he finished the Cleveland Half Marathon in 2:19, earning third place in the 65-69 age group. His next half marathon will be April 2 through the Ohio River Road Runners Club.

Centeno’s road to last December’s Rocket City Half Marathon began when his nephew Giovanni agreed to start training to be his guide. Giovanni, too, is a veteran after serving as an Air Force captain.

“He was trying so hard (as a guide during the race) because he was protecting me,” Centeno said. “In his mind, he was out there to protect. That took a lot for him to do that. It’s not easy to be a guide. For him to be my guide for the first time, it was hard and it was a challenge that he accepted because he knows how important a guide is. The mission of a guide is to keep the blind runner safe. He did a great job.”

Giovanni, 38, of Huntsville, is a 19-year employee at Costco Huntsville who served six years in the Air Force. His mother, Tamiris “Tami” Centeno, is a registered nurse at Fox Army Health Center. His father, Junior, served 21 years in the Army.

“It was definitely different,” Giovanni said of serving as Centeno’s guide in the race. “I don’t think it’s really something you can prepare for but it was something that required a lot of focus and attention to detail to get through the many hazards being confronted with.

“It was my second half marathon overall and the first time I’ve ever guided anyone in a race. Overall it was eye-opening to see all of the people interact with him and congratulate him. It was inspiring and especially for him since he’s pretty much 100% blind in both eyes. To be able to continuously run like that and not being able to see is quite remarkable.”

Centeno was born in Puerto Rico and grew up in New York City. Asked why he joined the Marines, he said, “Maybe because my two brothers joined the Army. I just wanted something tougher. That’s why I joined the Marines. It was a good career. No regrets. I wanted to be one of the few, one of the proud.”

He was stationed at Camp Pendleton, California, Camp Lejeune, North Carolina, and Quantico, Virginia. He was a recruiter in New York City from 1982-85.

“It was an enjoyable 21 years,” he said. “I felt proud wearing that Marine Corps uniform.”

He and his wife of 40 years, Gloria, have a son, Patrick, of Champaign, Illinois, and granddaughters Evelyn, 4, and Elena, 2.

Centeno shared his thoughts on this nation’s commemoration of the 50th anniversary of the Vietnam War.

“Those Vietnam veterans they deserve every recognition,” he said.

Editor’s note: This is the 401st in a series of articles about Vietnam veterans as the United States commemorates the 50th anniversary of the Vietnam War.