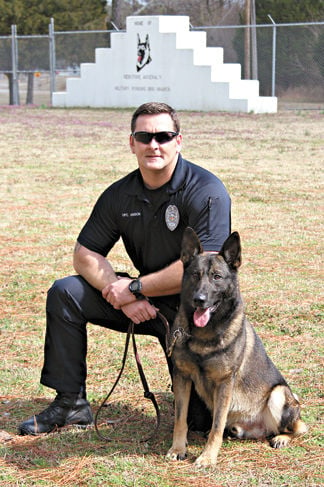 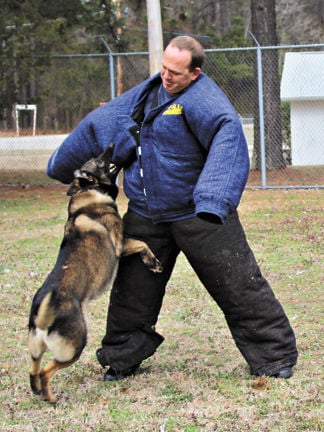 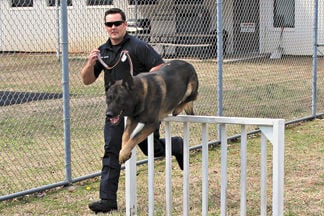 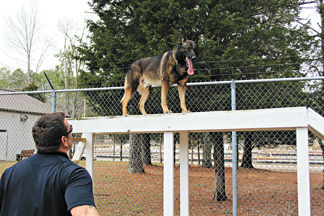 Like many law enforcement officers, Aaron Hanson works with a partner. Only his partner is four-legged and has been known to bite.

Hanson is the newest member of the Military Working Dog section, a six-person/six dog team under the Law Enforcement Division of the Directorate of Emergency Services. Overseen by kennel master Capt. Jack Rush, the military working dogs serve a role in the safety and security of Redstone Arsenal.

“You cannot call a bullet back,” Rush said. “You can call a dog back.”

Located at their home on Kingfisher Road, the military working dogs perform several jobs in providing both illegal substance detection and patrol and protection services on post. All dogs and trainers undergo schooling at the 341st Training Squadron at Lackland Air Force Base in San Antonio, Texas, which provides trained military working dogs and handlers to all four branches of the military, the Department of Defense and additional government agencies and allies worldwide. DES handlers must undergo a training course with their dog to obtain certifications in both patrol and detection.

“It was a long, grueling three months but I wouldn’t trade it for anything,” Hanson said.

Hanson came to DES in 2010 and originally worked in the directorate’s physical security division. Initially volunteering as a decoy for their dog training, Hanson later came on board as a handler. After being matched with his partner Kuli at Lackland, they underwent training together and have been a team ever since.

So what makes a good military working dog?

“His drive to do the work,” Hanson said. “Kuli is an excellent detector dog, but he is a police dog first.”

Hanson and Kuli work in eight-hour shifts together. It is understandable that when you spend as much time together as they do, a significant bond is formed. Hanson said that bond is essential to becoming an effective team.

“A great curve (to overcome) is being able to sync initially with your dog and become partners that understand each other 100 percent,” he said. “Dogs are like people in that each dog is different.”

Most military working dogs retire around age 10. Often upon retirement, their handler will adopt the canine. Being only 3, Kuli still has his whole career in front of him, and will continue to train and learn new techniques, as do all of the working dogs at Redstone. The facility on Kingfisher is their home and includes – in addition to personnel space and a state-of-the-art camera system – a kennel, kitchen, first-aid room for minor injuries and an obstacle course where the dogs and their handlers train. It is also located next door to the Army Veterinarian Services and veterinarian Capt. Teri Villers, whose door is open to the dogs, “24/7, 365 days a year,” Hanson said.

Given that the dogs reside at Redstone, at the end of their shift, Hanson and Kuli do part ways. Hanson said he does sometimes wish he could bring Kuli home to meet his other canine companion, a German Shepherd named Thor. The bond between the two partners is never more evident than when Hanson leads Kuli through his exercises on the obstacle courses. While they are training, both are all business; but after the exercise is over, Kuli basks in Hanson’s praise and fur ruffling.

“The canine capability is extraordinary,” Hanson said. “Canines can go anywhere at anytime. (Kuli) loves exercise and he is a thinker. He is my partner.”