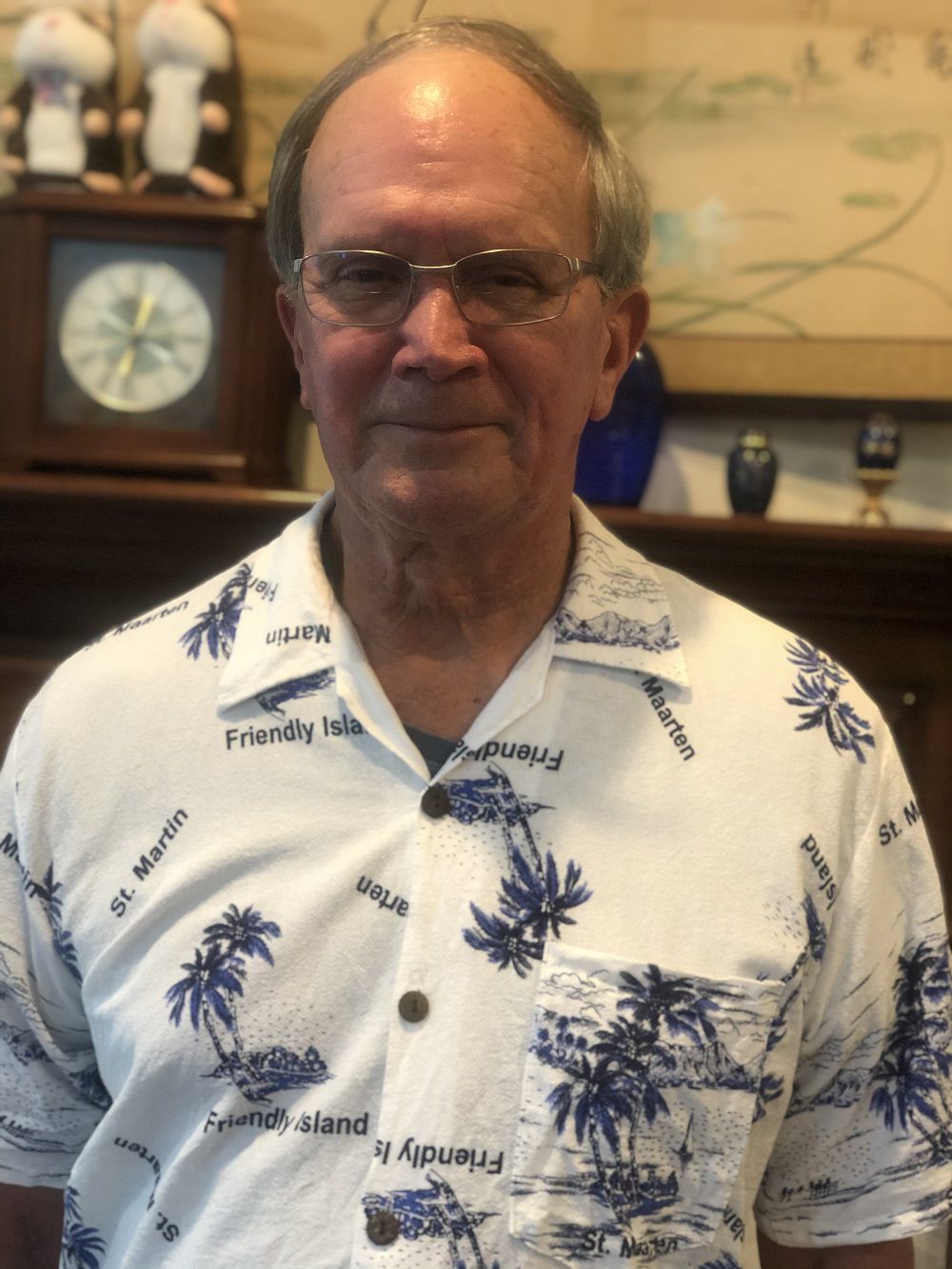 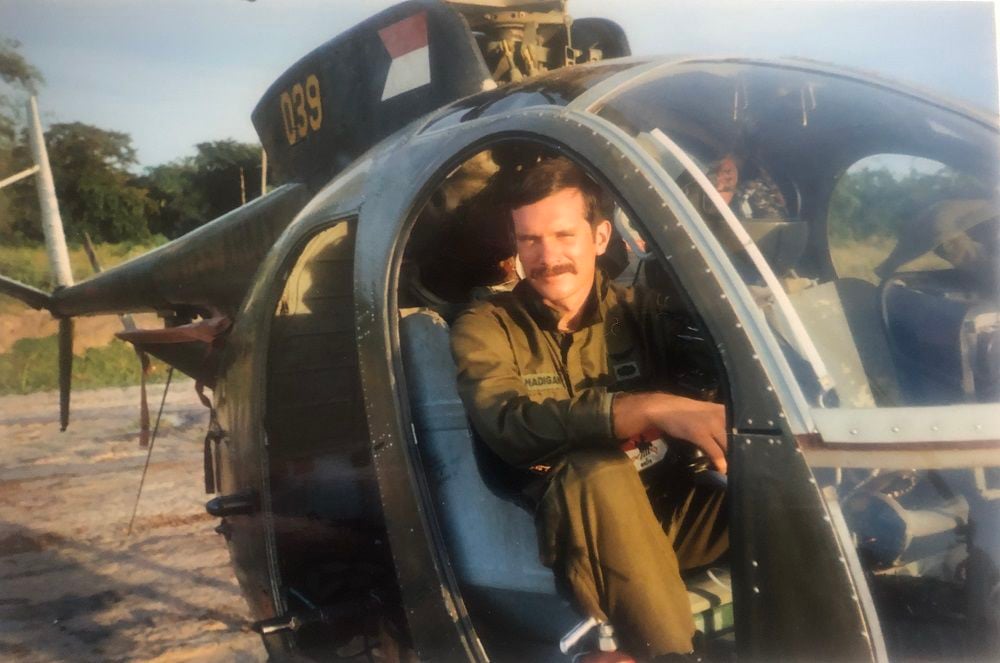 It’s hard to believe that Doug Madigan started as an armor officer who was afraid of heights.

Ironically the Michigan native became a helicopter pilot who flew combat missions in Vietnam and retired from the aviation industry.

“Fortunately I got to work in aviation,” Madigan, a retired lieutenant colonel, said of his more than 22 years as a defense contractor. “I always call it a gift from the Lord.”

He saw the tail end of the U.S. combat involvement in Vietnam. Madigan was a captain fresh from flight school at Fort Rucker when he arrived there on Sept. 1, 1972.

He became the aeroscout platoon leader for F Troop, 9th Cavalry. Madigan piloted one of the unit’s OH-6A Scout helicopters which were used for reconnaissance. The platoon had 10 of these helicopters which had a two-man crew consisting of the pilot and the gunner.

“Our job was to find stuff and give reports to the Cobras and Huey,” Madigan said. “Once we found stuff, we’d decide what to do. The Cobras would shoot it up. And the thing that was tricky was rules of engagement. Often we could not shoot until they fired at us. We had to get permission sometimes to actually fire on something we found.”

They were stationed at Lassiter Field in Bien Hoa. Their missions were conducted at different areas away from Bien Hoa. For each 1.5-2 hour mission from their staging areas, they would deploy the command and control Huey, two Cobras and one Scout OH-6A. “We called the two AH-1G Cobra gunships and the one OH-6A Scout a ‘heavy pink team,’” Madigan said. “That is how we operated in the Area of Operations.”

Madigan flew 500 combat hours during his five months with F Troop, 9th Cavalry. After the ceasefire Jan. 27, 1973, he flew another 50 combat hours for the last two months of his seven-month tour. This was while flying Hueys for the Four-Party Joint Military Commission for either releasing prisoners of war or picking up POWs.

He and the commission’s other pilots were identified by wearing an orange armband that had a black 4 on it. Madigan was on one of the last planes to leave Vietnam in late March 1973.

The then captain got to see the 29 American

prisoners of war who were released in Loc Ninh in South Vietnam. “Pretty cool,” he said.

“Being there when I was there I got to see some very interesting things,” he said of his Vietnam tour. “I would say overall it was rewarding and exciting. You got to do your mission. Your mission was important. And you got to work with good people.”

Madigan received the Bronze Star Medal and 16 Air Medals, two with a “V” device for valor.

He remains close friends with Bob Monette of Madison, who he first met in September 1972 when Monette was a Cobra pilot with the 9th Cavalry. They reconnected in 1978 at the U.S. Military Academy where Madigan was a tactical officer. They kept in touch and joined the Vietnam Helicopter Pilots Association around 1999. In 2012 they and other veteran pilots revisited Vietnam as a tour group.

“It was well-worth it,” Madigan said of the two-week visit.

The Sault Ste. Marie, Michigan, native graduated from the U.S. Military Academy in 1969 with a bachelor’s of science degree. He went to Ranger school, then airborne school and surprisingly to flight school.

“I was afraid of heights,” he said. “I went airborne and became a pilot.”

Madigan went to Germany with a tank battalion for two years in 1971. Next came flight school where he graduated in early summer of 1972, first at Fort Wolters, Texas, and then at Fort Rucker.

He retired as a lieutenant colonel in 1989 in St. Louis after 20 years and four months. Madigan worked with a contractor in St. Louis and he came to Huntsville in 1996 when the Army’s aviation function moved to Redstone Arsenal.

He and his wife of 45 years, Connie, have a combined three children – two sons and a daughter – and 10 grandchildren. Their sons, Sean and Tony, both plan to move soon from St. Louis to Florida. Their daughter, Missy Ehrenbeit, resides in Huntsville’s Hampton Cove.

Madigan, 74, also of Hampton Cove, belongs to the Vietnam Helicopter Pilots Association and the Knights of Columbus. He enjoys collecting vinyl records from the 1960s through the 1980s and reading about the musicians. He has a 10% disability rating from Veterans Affairs for coronary artery disease from his exposure to Agent Orange while serving in Vietnam.

“I think overall there’s been a lot of great things that have happened to recognize Vietnam veterans,” he said.

The members of the Vietnam Helicopter Pilots Association restored a Huey helicopter which they display at schools and in parades. “”It’s always nice to see people clapping for you,” Madigan said.

Editor’s note: This is the 273rd in a series of articles about Vietnam veterans as the United States commemorates the 50th anniversary of the Vietnam War.