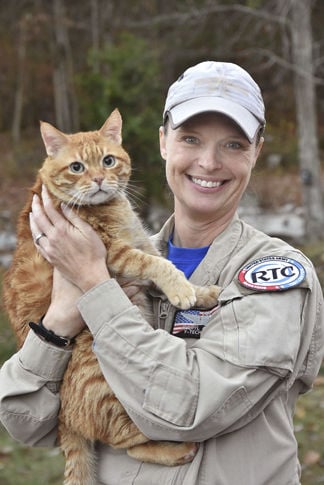 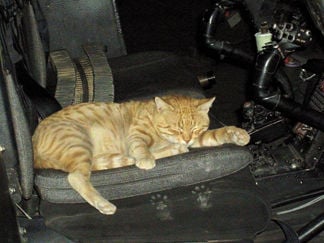 From the war zone of Iraq to calendar pin-up “Mr. November,” one lucky feline has fit a lot of living into his nine lives.

The orange tabby cat became a beloved member of the team at Forward Operating Base Sykes, near Tal Afar from 2006-2010. As new units rolled in, Sgt. B., as he was affectionately named by the Soldiers, quickly let the men and women know who was in charge.

“It was a tradition,” said Cheryl Anderson, a Y-Tech Services contractor with Redstone Test Center’s Aviation Flight Test Directorate, who met Sgt. B. when she arrived at the base with her Tennessee National Guard unit in 2009. “When the guys were leaving, they would say, ‘Can you take care of our cat?’”

Each subsequent unit would look after Sgt. B., feeding him tuna from the dining facility and even cutting a cat door in the command post. Anderson said that her fellow Soldiers would stop and pet Sgt. B. and those few moments of comfort and normalcy in the middle of a warzone helped them do what needed to be done.

“He got care packages from the States with (flea medicine), collars and treats,” said Anderson. “I can’t tell you what a stress relief it was to have him and the dogs. He made a big difference.”

But in late 2009 when it was announced that Anderson’s unit would be the last to be stationed at the base, Sgt. B.’s fate was in jeopardy. Although the cat had entered the world as a stray, over the years he had adapted to the life of a domestic pet. Sgt. B.’s last unit knew they had to take action. Anderson and the other Soldiers in the unit contacted the Society for the Prevention of Cruelty of Animals International, and through their Operation Baghdad Pups program, put together a plan to liberate Sgt. B. to the United States.

“We don’t think he would have survived without us,” Anderson said.

In early 2010, Sgt. B. embarked on the long trip to the United States first through a four-hour convoy to Baghdad, then via plane to Germany, before being quarantined for two weeks in Washington D.C. After receiving necessary shots and the all-clear, he made his way to Nashville, and then finally to Anderson, who had returned home with her unit.

“He had given so much support to all of us, it was only fitting that we leave no buddy behind,” Anderson said.

Today, Sgt. B. is enjoying life with Anderson and her husband Michael in the outskirts of Madison County, sharing his current operating base with a bulldog named Oxley. Although retired, Sgt. B. is still a military cat, only now his enemies are the snake insurgents that unsuccessfully attempt to invade his property.

“The first time he went in the backyard it was like he was on the surface of the moon because it was so green,” Anderson said.

When not hunting snakes, Sgt. B. has embarked on a new career as a model, being featured in the Greater Huntsville Humane Society’s 2017 Hot Dogs and Cool Cats Pet Calendar Contest. After winning a spot in the calendar through online voting, the Anderson’s chose November as Sgt. B.’s month in honor of Veterans Day. Anderson said that after all that SPCA International has done for Sgt. B., it was their time to give back to other cats and dogs looking for their forever homes.

Sgt. B. also is active in social media with his own Facebook page where service members from around the country have sent Anderson pictures of themselves with the cat. Soldiers from Anderson’s National Guard unit have traveled to Madison County to visit Sgt. B. and in December 2010, they were reunited in Nashville at the unit’s holiday party. Anderson said she was worried about how he would handle the drive and the unfamiliar surroundings, but Sgt. B., always a Soldier for Life, was at home with his team.

“Instead of being scared, he came out of his crate and owned the place. It was like he knew he was back with his people,” Anderson said with a laugh.

To purchase the Greater Huntsville Humane Society’s 2017 Hot Dogs and Cool Cats Pet Calendar that includes Sgt. B. as the November pet of the month, visit their website at www.ghhs.org/calendars.