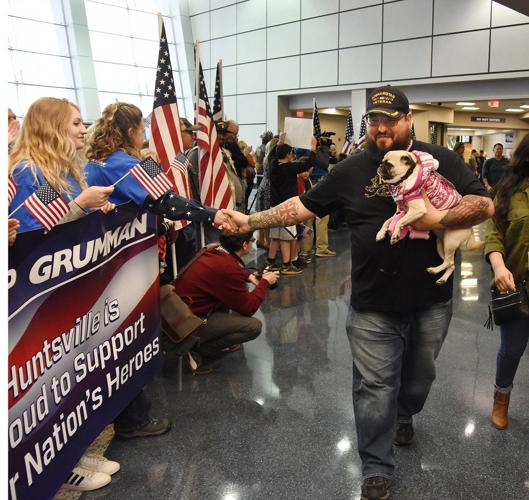 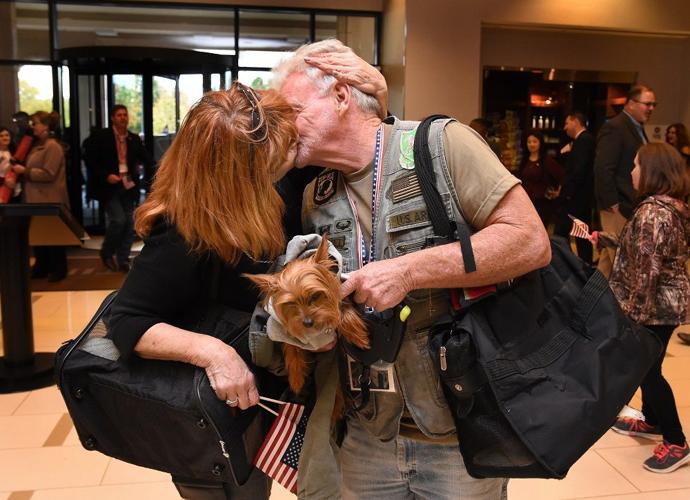 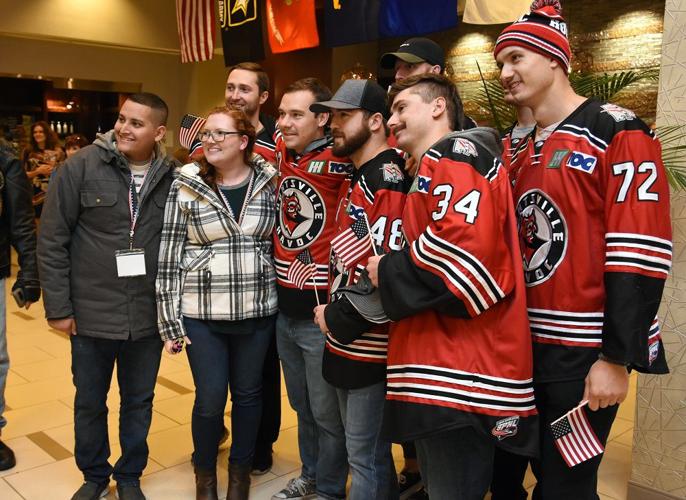 It was the welcome home retired Cpl. Gabriel Palacios never received, but was long overdue.

Ask Palacios what his injuries are from the war in Afghanistan, and he will tell you that to list them in detail will take awhile. From the lower part of his spine down, just about every joint is injured. His retinas have holes in them from the explosions. His jaw is fractured, as is his right shoulder. Traumatic brain injury complications and post-traumatic stress disorder are a reality of his day-to-day life.

When the Marine was evacuated by the Red Cross and returned to the United States in 2010, there was no fanfare or celebration – just medical care and the reality of a new normal. Palacios would be medically retired from the Marines, a 100 percent disabled veteran. His wife, Susie, would become more than just his wife, but his caregiver.

Overwhelmed and fighting back tears, Palacio walked through the flag and reception line at the Huntsville International Airport Nov. 7, an honored guest of the Semper Fi Community Task Force’s Heroes Week. More than a thousand miles away from his native state of California and eight years out from his time in Afghanistan, he was surrounded by the cheers of a grateful Tennessee Valley community, young and old alike, who may not have known his name, but knew and honored his service and continuing sacrifice.

“Those of us that got to have a welcome home, where actually somebody cared to do something like that, to them it’s just another welcome home. For me, who didn’t get one, now I get to see what all of the fuss was about. Since I have been a veteran for so long, I think I appreciate it more now than I would have then.”

Representing the Army, Air Force, Navy and Marines, and hailing from nine states, 27 honored guests – wounded service members and their spouses/caregivers – arrived in Huntsville last Wednesday for an all-expenses paid week of rest, relaxation and recognition, courtesy of a grateful and generous North Alabama community. The rousing airport welcome was only the beginning – but an important one for organizers.

“I want them to understand that the people of North Alabama really care,” said Heroes Week lead organizer Steve Mozian.

Everyone from Redstone Arsenal leadership, to representatives from local companies, Patriot Guard riders and schoolchildren from Madison Academy turned out to show their support for the annual outreach and its guests. Waving flags, offering fist bumps and holding signs bearing messages such as, “Thank you for your service,” the airport was filled with a low hum of excitement and patriotism.

“They helped us. They risked their lives for us,” Isabelle Sutton, a fifth-grader at Madison Academy, said of the importance of showing up to welcome the heroes.

“They fought so that we could have the freedom to do whatever we want,” Gibson said.

For retired Sgt. Gabe Charris, his fight was not on a battlefield, but within his own body. When he was medevaced by Black Hawk to the Warrior Transition Battalion at Fort Sam Houston, Texas, from Fort Polk, Louisiana, it was not because of wounds by an enemy, but because his body had turned against itself. Diagnosed with stage IV Hodgkin’s lymphoma in December 2016, after nine months of chemotherapy his doctor had a harrowing message for him.

“The doctor said, ‘Go home and be with your daughter. There’s nothing else we can do,’” his wife Rachael recalled.

Ever a Soldier, Charris wasn’t about to go down without a fight.

“I told the doctors, ‘There has to be more – that can’t be it,’” said Charris, who was medically retired after serving in the Army for a little more than five years.

With nothing to lose, he opted to participate in a trial that was neither Food and Drug Administration approved, nor proven to work, and defied the odds. As of March 2018, he is in remission. The couple recently moved to Meridianville and heard about Heroes Week through the Department of Veterans Affairs.

“When you go through something like that it makes you want to take advantage of any opportunity that you can,” Rachael said. “When this came about, he said, ‘I don’t feel right doing it. I feel like there are more deserving people.’ I said, ‘If it wasn’t for your cancer, you would’ve done your 20.’ He served with honor and he completely, 100 percent, deserves to do this. He kicked cancer’s butt.”

With accommodations at the Westin Huntsville, the Heroes Week guests were treated to a variety of luncheons, dinners and activities in their honor, including a boat cruise on Lake Guntersville, recognition at the Veterans Breakfast and grand farewell at the Redstone Harley-Davidson. While the week offered plenty of opportunities for appreciation for the wounded heroes and their spouses/caregivers, more importantly, it gave them the chance to spend time with each other, and share in a fellowship only they understand. The Palacios, who moved to Athens within the past year, were looking forward to meeting new people and learning from them.