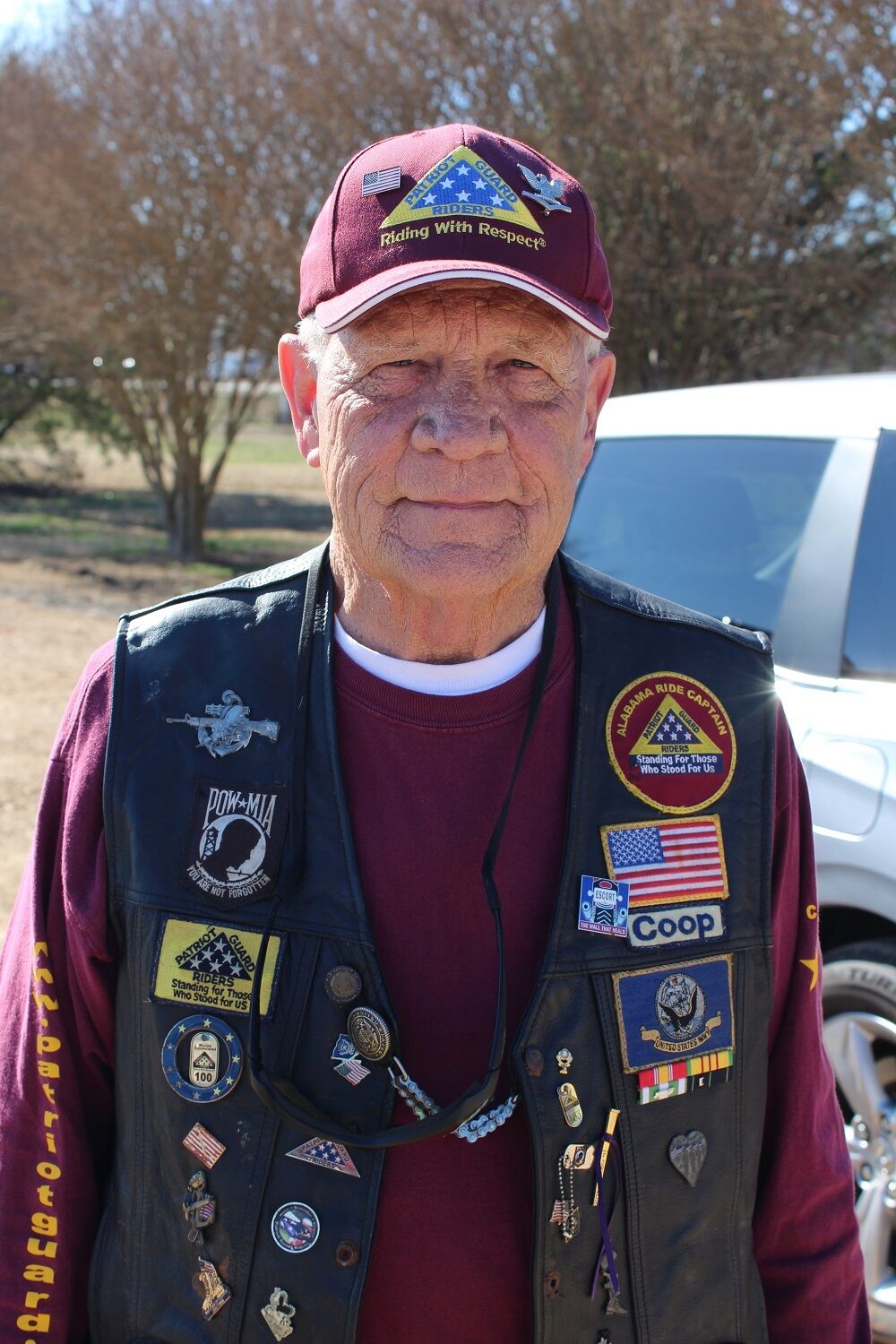 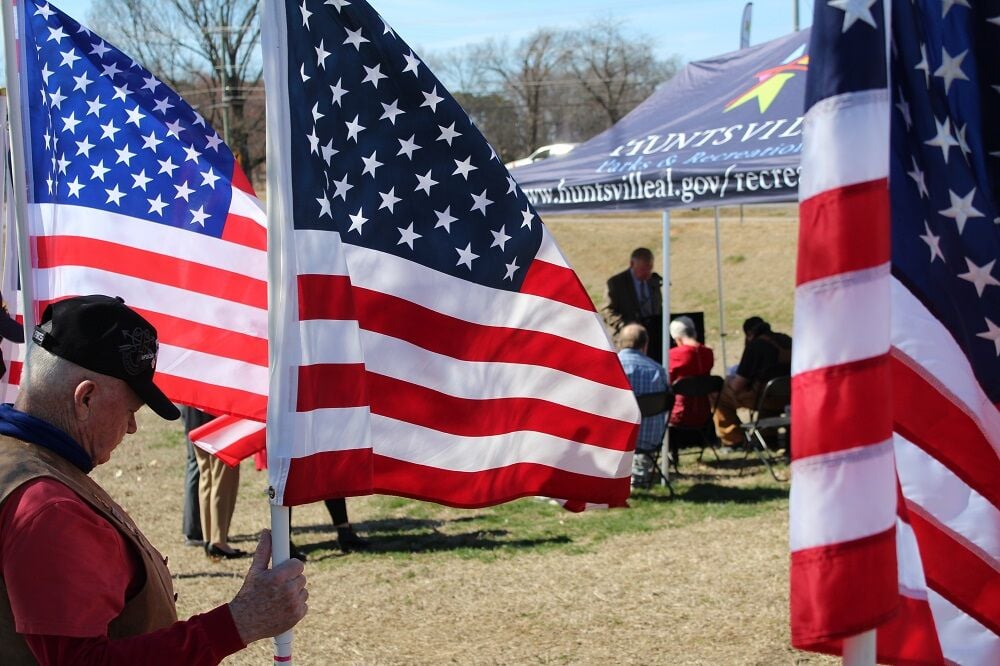 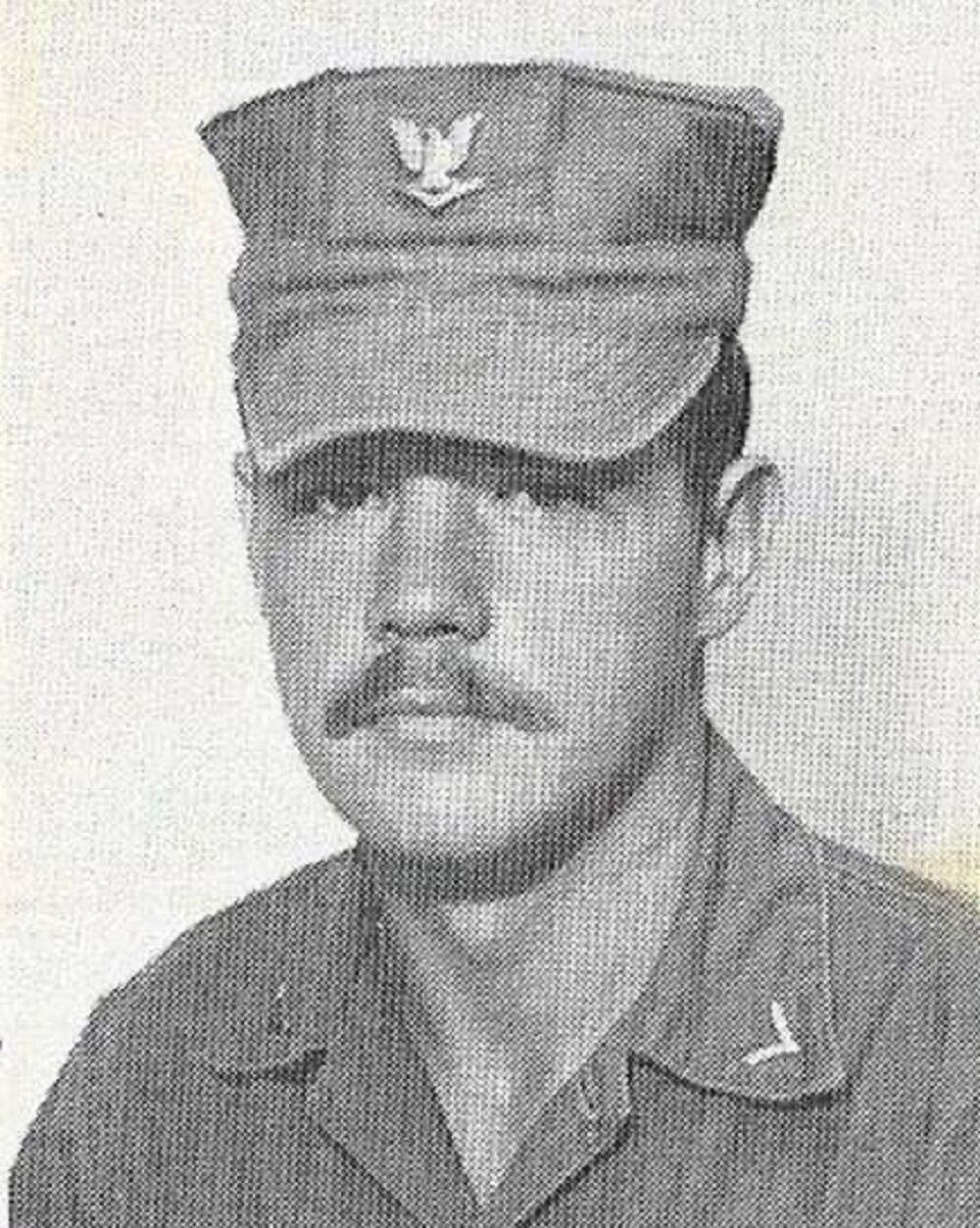 His district of about 300 members goes from Cullman and Gadsden north to Tennessee, and east and west from Georgia to Mississippi.

“It’s actually a ministry for me,” Cooper said. “We honor the fallen veteran – doesn’t matter if they’re retired or whatever. And we honor the families. We protect the families. And we don’t allow anything to interfere with their funeral or service anywhere. And we do the exact same thing for first responders.”

The members carry the flag at veterans events, parades and memorials and they serve as funeral escorts at churches and national cemeteries including Montevallo in Alabama, and in Nashville and Chattanooga. Cooper and many of the members ride motorcycles but that is not a requirement.

He was among the 15 members carrying the flag at the City of Huntsville’s dedication ceremony March 8 at the Huntsville Spring Branch bridge on Drake Avenue. It was named the Lance Cpl. Larry G. Clark Memorial Bridge in honor of a Huntsville Marine who was killed in Vietnam in 1968.

“There’s regions (of Patriot Guard Riders) all the way down to local chapters,” Cooper said. “For example, Alabama’s in the Dixie Region.”

He was born in Florence but has spent most of his life in Huntsville. He left Lee High School early and started attending night school for an electrician apprenticeship. He belonged to the International Brotherhood of Electrical Workers union local 558 in Sheffield.

And then his draft notice arrived and his life changed. Cooper joined the Navy in 1968 and became a Seabee.

His father was an electrician’s mate in the Navy on a Landing Ship, Tank or LST in the Pacific in World War II.

“I was real happy when I joined. I got home and told my dad I was in the Seabees. He proceeded to tell me how dumb I was,” he said laughing.

Cooper was 19 when he went to Vietnam in December 1968 as an electrician with a construction battalion. The petty officer third class belonged to Bravo Company in Mobile Construction Battalion 71.

“We were building Camp Miller (in Chu Lai),” he said. “And it was a combination ammo dump and security area.”

Besides doing his electrical work, he served as a M60 machine gun team leader. He spent his off time doing security in the jungle.

“Not pretty,” he said of his tour that went through July 1969. “Just hadn’t talked about that in a few years. It was terrible.”

Asked how much combat he saw, he said, “Quite a bit on the patrols and when they tried to overrun us and stuff like that.”

The 50 members of Bravo Company were plumbers and electricians. Five did not survive the war.

When he returned to the U.S., the Navy advised him and the other troops not to travel in uniform and to travel two at a time. They arrived without incident at Davisville, Rhode Island. But at the airport in Seattle, they were met by antiwar protesters who called them names and threw things at them.

Cooper helped build Camp Moscript in Roosevelt Roads, Puerto Rico, from December 1969 through February 1970. He left the Navy as a petty officer third class in October 1970.

He took a test and received his GED and he completed an associate degree in electrical engineering in 1987 from Devry University.

After 20 years he retired in 2015 as an electrical engineer with Matec Instrument Company Inc.

The Huntsville resident and his wife of 33 years, Debra, have two sons and two grandchildren. Their oldest, Dwayne, lives in Huntsville; and John IV resides in Springhill, Tennessee. At 72 he enjoys riding his motorcycle, going to restaurants with Debra and sitting with her in their screened-in porch. He is a member of the American Legion.

Cooper shared his thoughts on this nation’s commemoration of 50 years since the Vietnam War.

“I think it should be a real big deal,” he said. “We were no different than anybody. We were there for my personal reasons, the same as everybody else, the freedoms we enjoy in the United States. It was like Korea. The Vietnamese people wanted a democracy. They asked for help. We veterans all believe in the same thing. We wanted freedoms and our Bill of Rights.”

Editor’s note: This is the 312th in a series of articles about Vietnam veterans as the United States commemorates the 50th anniversary of the Vietnam War.