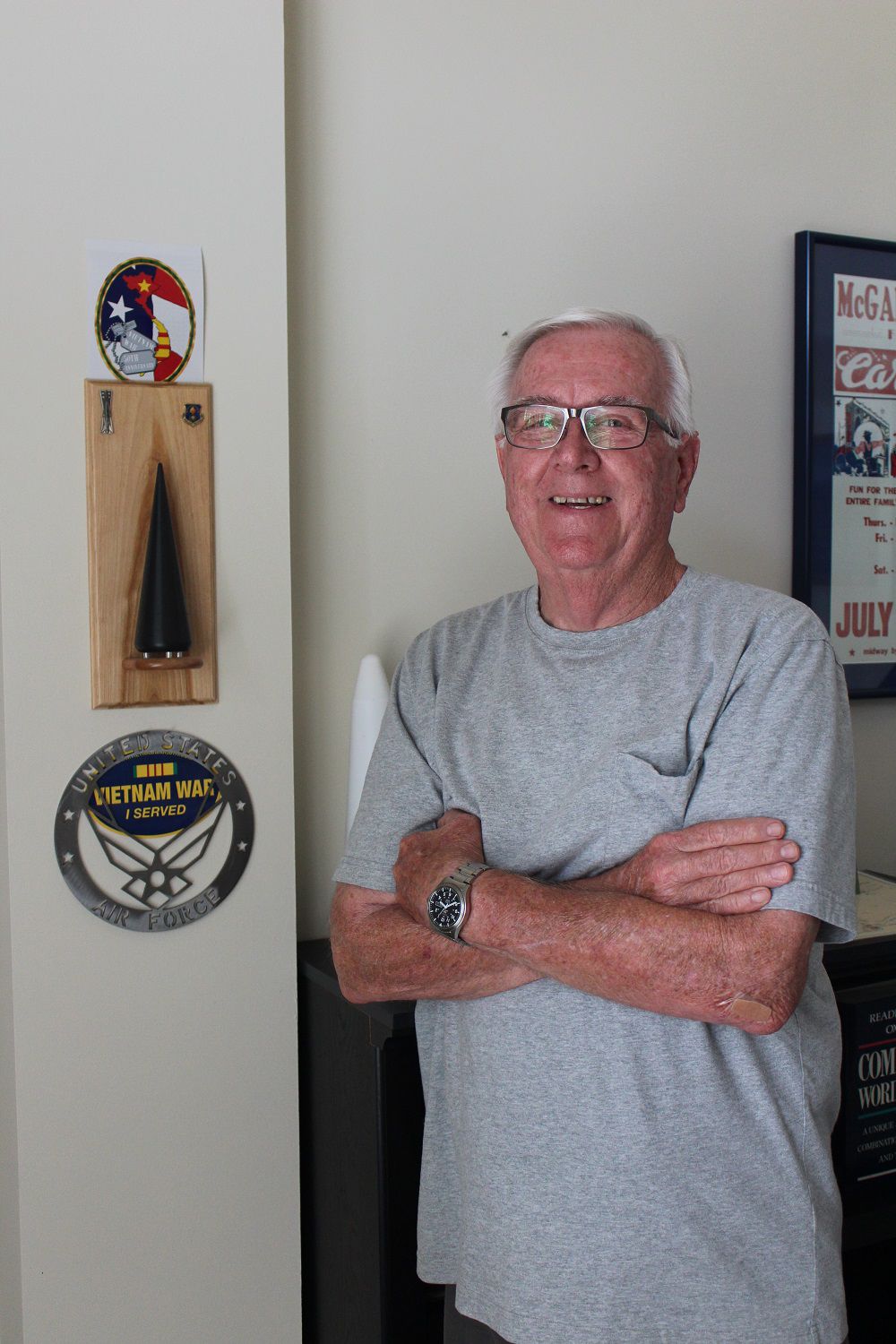 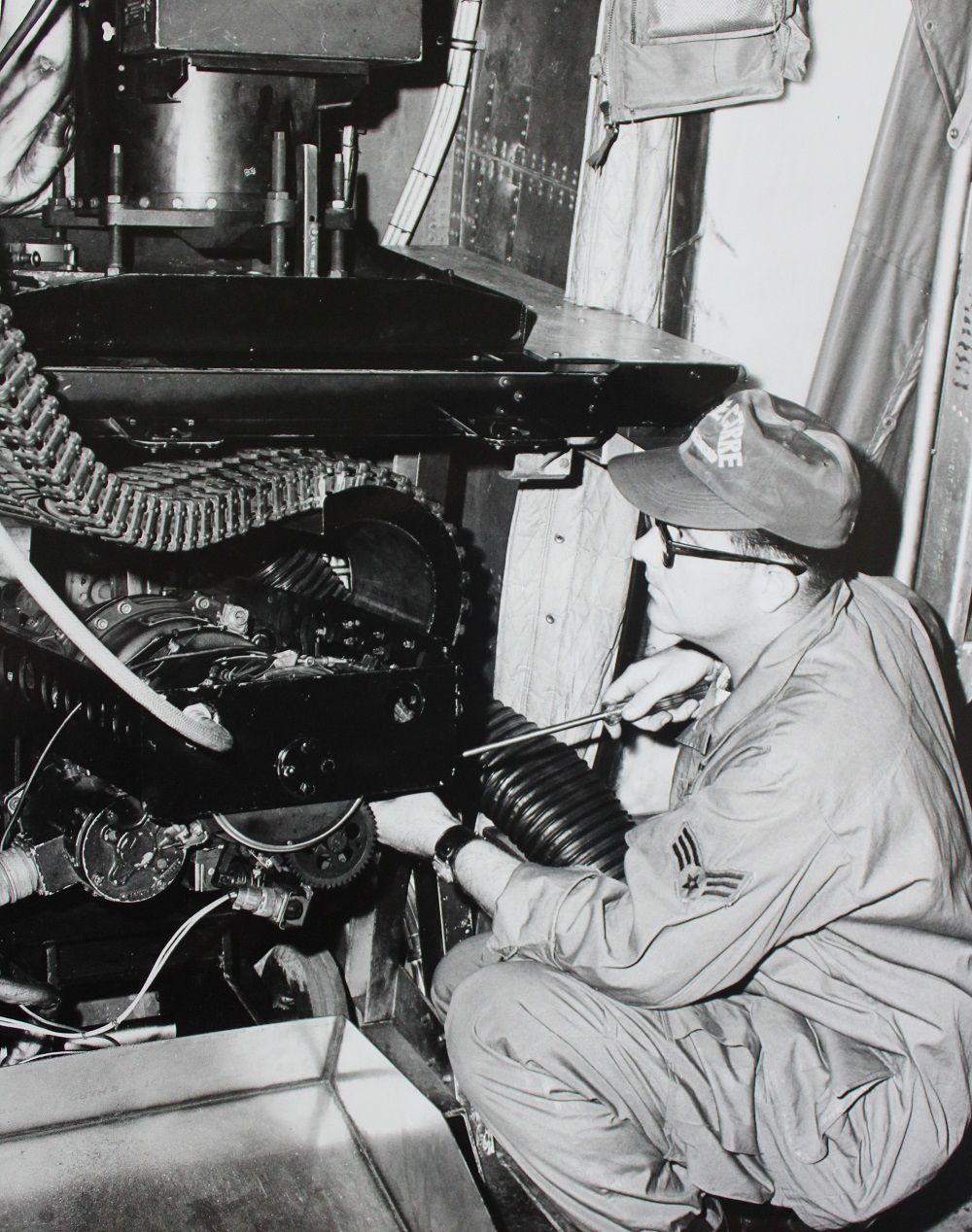 The flagpole in front of this neat house on a Madison street flies both the American flag and the POW/MIA flag.

Vietnam veteran Bill McGahey, the homeowner, wants everyone to remember the prisoners of war and those missing in action.

“It was one of those things where we never should forget that we had people that didn’t come back,” the retired Air Force master sergeant said. He retired in 1984 after 20 years of service, including his combat tour in Vietnam from April 1968 until April 1969.

“I was sitting in an auditorium getting a lecture on basic training when JFK was assassinated,” McGahey recalled. “That was an unreal moment. What a way to start your military career. That was like ‘Holy cow, what are we getting into now.’”

He was originally a nuclear weapons technician for 16 years, off and on, and eventually became an aircraft munitions loader. In 1965 he was assigned to Lowry Air Force Base, Denver. On April 1, 1968 – April Fools Day – he received orders to report to Vietnam by the end of the month.

McGahey was assigned to the 16th Special Operations Squadron at Ubon, Thailand. He would become an aerial gunner on the first AC-130 gunship, a new airplane designed to disrupt the Ho Chi Minh Trail. The airplane was armed with four 762mm miniguns and four 20mm Gatling guns.

Two crews alternated missions on the aircraft. They flew over the Ho Chi Minh Trail, South Vietnam and a few missions over the Demilitarized Zone. Each crew included four gunners, a flare operator or load master, at least two sensor operators, the pilot, co-pilot, navigator and a flight engineer.

During his tour from 1968-69, McGahey flew on 116 combat missions. He earned a Distinguished Flying Cross and six Air Medals.

“I would have to say it was really interesting,” he said. “And the reason for that is that every mission was a little different. We got hit a couple of times (with antiaircraft fire). I flew missions in Vietnam that we didn’t fire a round.”

A particularly memorable mission happened in 1968 over Laos. Their aircraft had just arrived in position and was looking for enemy vehicles. As usual there was intense antiaircraft fire. One 37mm shell went in front of the airplane. Another went behind the airplane. But one shell penetrated the center of the airplane, right through the belly. McGahey was the back gunner that night. The concussion from the enemy shell blew the backdoor open. Fortunately no one was injured; and the aircraft had enough fuel to safely return to Ubon.

“That was probably the most memorable type thing,” McGahey said. “It was a shock to everybody.”

During his tour, no one on the two crews was hurt and the aircraft stayed intact. The airplane sits on a ramp at the Air Force museum in Dayton, Ohio.

McGahey returned to Lowry Air Force Base in his original career field. He arrived at Vandenberg AFB, California, in 1978. He was NCO-in-charge of the 394th Munitions Area when he retired there six years later.

He went to work for Lockheed Martin at Vandenberg AFB. McGahey was an operations safety engineer when he retired from Lockheed Martin in 2007 after 23 years. He moved to Madison in 2008.

The Reseda, California, native graduated from Reseda High School in 1962. He entered Pierce Junior College in Woodland Hills, California, that fall but grew tired of school. So he became a technician for RCA Data Systems until he joined the Air Force with the military draft looming.

His wife of 47 years, Judy, died Dec. 31, 2014, from cancer. He has three children, seven grandchildren and a great-granddaughter. His daughters, Kimberly LeChien and Deborha Brooks, both reside in Madison. His son, Daniel, lives in Lompoc, California.

McGahey, 76, belongs to the American Legion Post 229 of Madison, Vietnam Veterans of America Chapter 1067 and the Care Assurance System for the Aging and Homebound, or CASA, of Madison County. He likes cars and traveling.

He supports this nation’s commemoration of 50 years since the Vietnam War and he is an active participant in Huntsville’s annual 50th Anniversary of the Vietnam War Lecture Series.

“It was one of those wars that we really shouldn’t have got into,” McGahey said. “Too much politics in that war.”

Editor’s note: This is the 274th in a series of articles about Vietnam veterans as the United States commemorates the 50th anniversary of the Vietnam War.