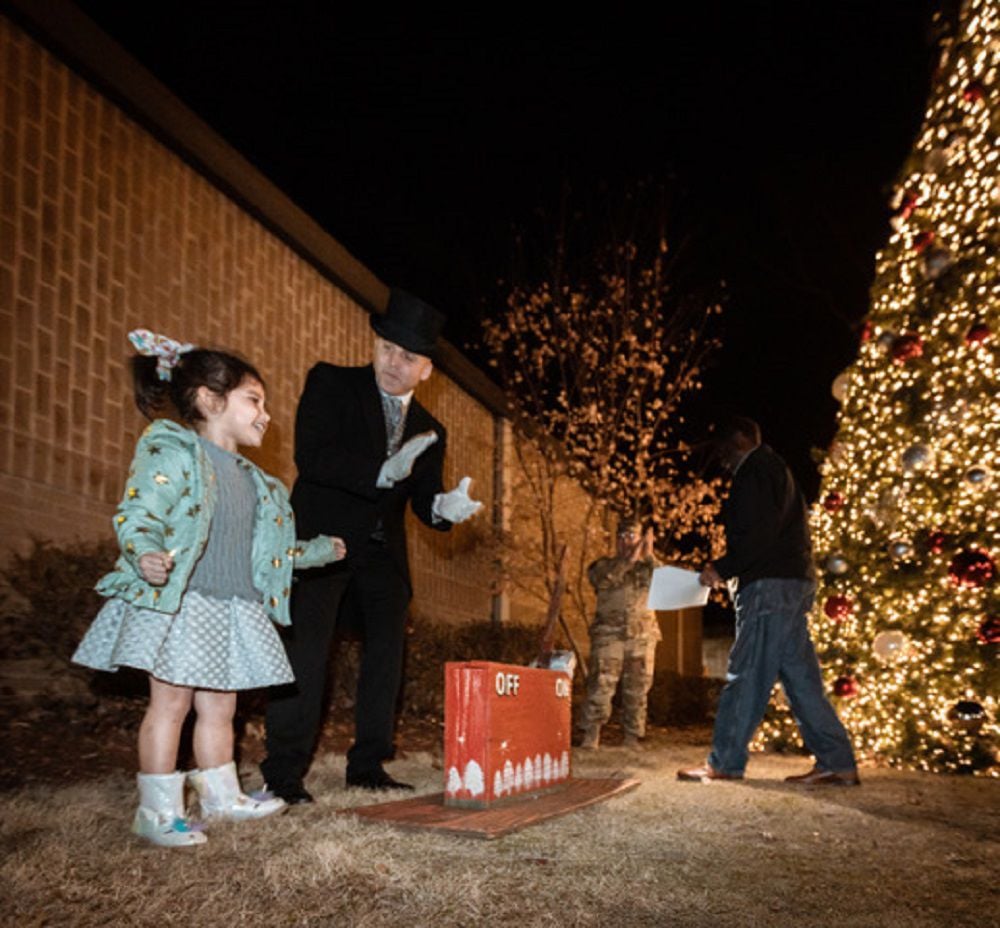 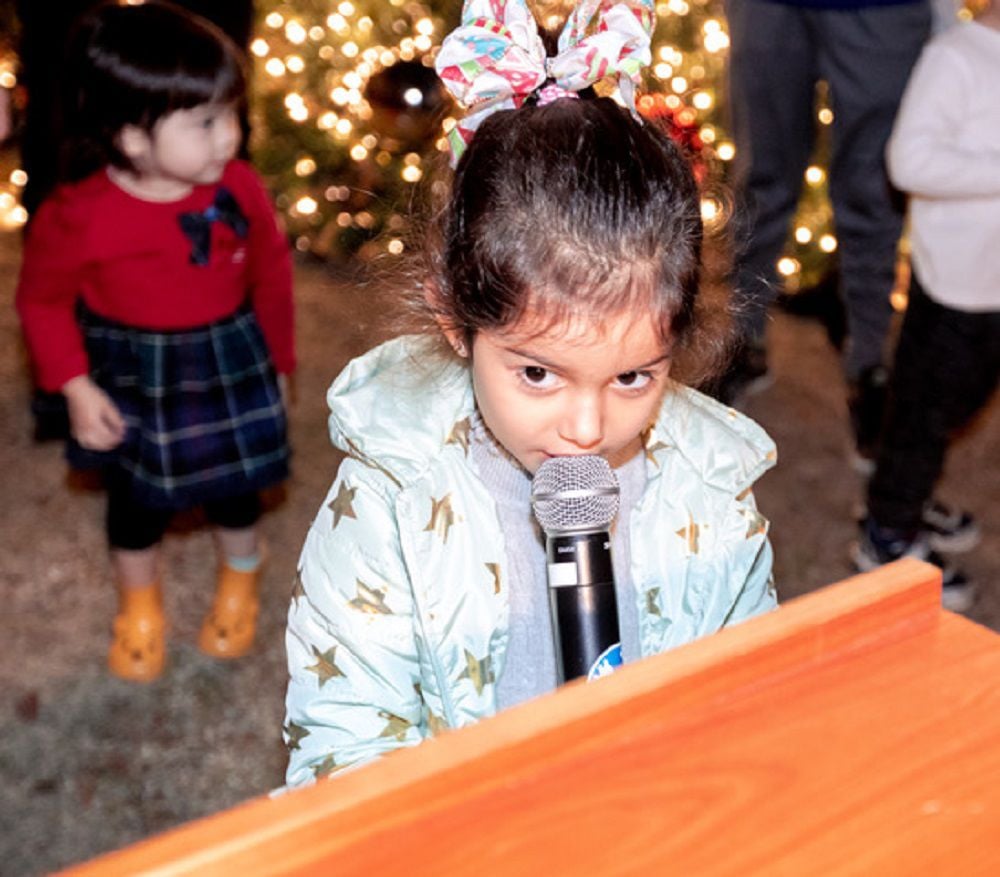 When her name was called, Aeliana Albandoz walked over to Garrison Commander Col. Kelsey Smith and the two pulled a lever, almost as tall as she is, lighting the 2019 Christmas tree.

It was around 5:30 p.m. Thursday. A large crowd counted down, 5-4-3-2-1 – followed by applause and cheers as the dark night was immediately filled with bright light from the 12-foot tall tree located at The Summit.

Aeliana estimated the tree had “a ton” of lights on it as she spread her arms out wide standing in front of it.

The 4-year-old wasn’t done, even though the crowd started wandering back inside to enjoy holiday activities and food. Held in the arms of her mother, Nicoleta Padureanu, the two had been posing for photographs in front the tree, a podium and microphone was nearby. Once close, Aeliana grabbed the microphone and said, “Thank you.”

Family and Morale Welfare and Recreation Director Derrick Gould turned the microphone back on and handed it to the young girl, who proceeded to say a few words and sing a rendition of “Twinkle, Twinkle, Little Star.”

“That’s appropriate,” a nearby woman said to Aeliana, “Just look at all of those little lights, they do look like stars.”

It was a poignant moment.

“You make me so proud,” Nicoleta told her daughter.

Earlier in the week, sitting in the living room of their Madison home, Nicoleta said the holiday season, starting with Thanksgiving is a tough time for the mother and daughter after the loss of husband and father, 1st Lt. David Albandoz.

Albandoz was among eight members of the Puerto Rico Air National Guard killed on May 2, 2018, when the WC-130H they were delivering to Davis-Monthan Air Force Base in Arizona crashed shortly after takeoff outside of Savannah, Georgia. A native of San Juan, Puerto Rico, he spent 16 years serving in the Air Force, including deployments to Iraq and Afghanistan. He was 37.

“It doesn’t matter how long it’s been, when you lose someone you’re going to feel it this time of year more poignantly,” Nicoleta said. “For myself I like to retreat and spend time at home but I’ve found that having a support group of friends and spending time with them, it doesn’t replace the person you lost but it sometimes makes it better.”

Friends are the family that help her make it through the tough times. She and Aeliana were surrounded by them at the tree lighting ceremony. Nicoleta said she’s found an inner strength to help her stay strong for her daughter when they attend military events. It’s hard, but she wants her Aeliana to meet other military kids and to know that part of her father.

“They’re all nice events and I think it’s how you move forward. It’s cathartic,” she said, while not always easy.

At an event earlier in the year, Aeliana mistook a uniformed Gen. Gus Perna for her father, running up to him saying, “Papa!”

“I started crying … she’s still so young and doesn’t understand,” Nicoleta said. “Gen. Perna was wonderful. He held her, gave her extra attention and introduced her to his wife.”

She knows as their daughter gets older she will have more questions and she’s preparing for it. For now, she relishes the joyful moments that fill each day with Aeliana.

“She is so much like him,” Nicoleta said. “She is super fun and mischievous, just like him. She’s bright and there’s never a moment of boredom around here.”

Nicoleta said this year, more than ever, Aeliana speaks of Santa. She knows with their family of friends, they will have the best possible holiday.

“We want to wish everyone happy holidays and I hope people will remember those who have not only lost ones they love, but don’t forget those who have been injured in service because that is still a traumatic thing,” she said. “This is a hard time for all who have had these experiences. I want to wish strength and joy to our serving members, wherever their service may take them this season; the wounded warriors, the POWs and MIAs – and their families. Also all of our veterans and their families, we thank you all for your and your families sacrifices.”