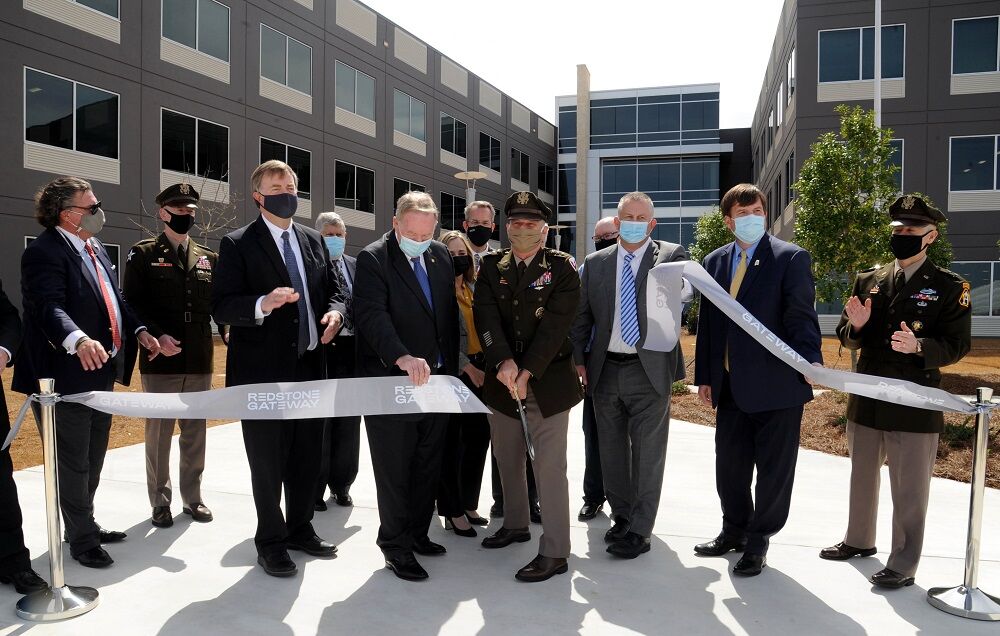 The lobby of the new Building 100 Secured Gateway after the ribbon cutting at the 4.6 million square-foot, mixed-use development near Gate 9 at I-565 and Redstone Road. (Eric Schultz / Redstone Rocket)

The lobby of the new Building 100 Secured Gateway after the ribbon cutting at the 4.6 million square-foot, mixed-use development near Gate 9 at I-565 and Redstone Road. (Eric Schultz / Redstone Rocket)

Local leaders marked the opening of the new Secured Gateway-100 building with a ribbon cutting March 21.

Redstone Senior Commander Lt. Gen. Donnie Walker delivered remarks in which he praised the project’s success thus far and thanked the individuals and businesses that had major roles in the milestone.

“Redstone Gateway is an important step toward making Redstone Arsenal a more efficient and effective installation, and setting the conditions for even greater future growth on and off the installation,” he said.

Redstone Gateway encompasses 468 acres around Gate 9 and currently includes office space, restaurants, a hotel, a daycare and a conference center. Redstone Arsenal partnered with developer Corporate Office Properties Trust through the Enhanced Use Lease agreement to fund and build SG-100 and other properties at Redstone Gateway.

“Because of this Enhanced Use Lease space, the Army is able to provide our workforce with what they deserve: a professional, quality and efficient work environment,” Walker said.

“Projects like this would not happen without teamwork,” Budorick said. “Redstone Gateway truly is a public-private partnership with stakeholders among all the sectors of government, and developments like this would not run smoothly without such fantastic governance you have right here in the Tennessee Valley. We are grateful the county made such an effort to relocate Gate 9.”

The 250,000-square-foot building sits just beyond Gate 9 and will house multiple government agencies, including the Program Executive Office for Missiles and Space, FBI, and Army Corps of Engineers-Huntsville. Additional space remains open in the building to potentially house another government tenant in the future.

“When Redstone Gateway began, it was coined as a win-win development for all parties involved,” Walker said. “I think we are seeing that today. Because of a public-private partnership – because of the efforts of state, city and county, Redstone and corporate leaders – we now can provide modern office space for Redstone’s growing community of tenants and missions, and the infrastructure support to recruit the workforce of the future. Redstone Gateway offers a quality working environment primed for growth, synergy and whatever our future workforce needs to succeed.”