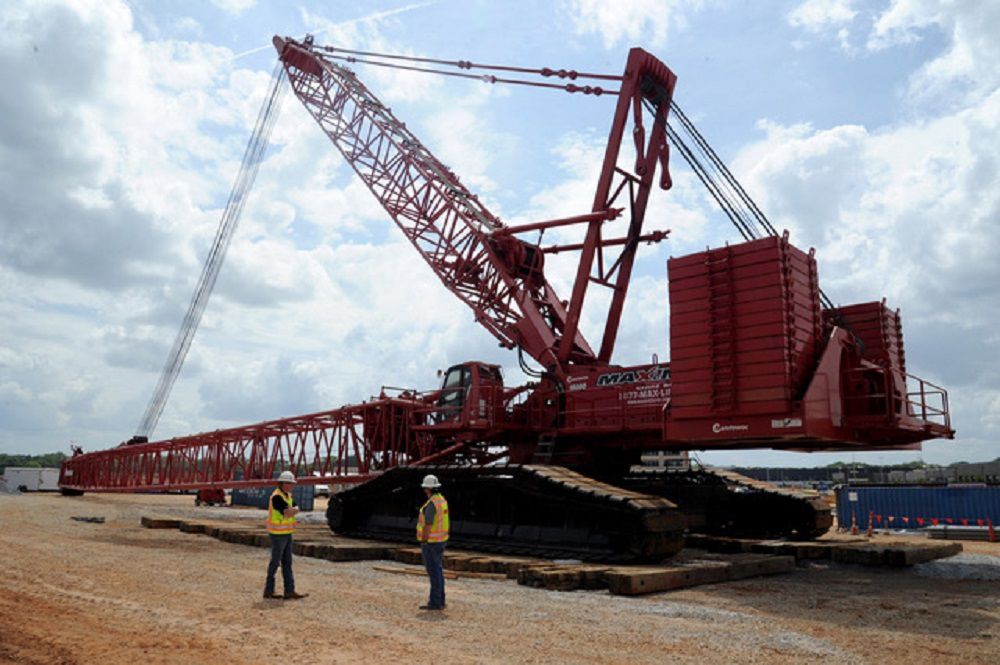 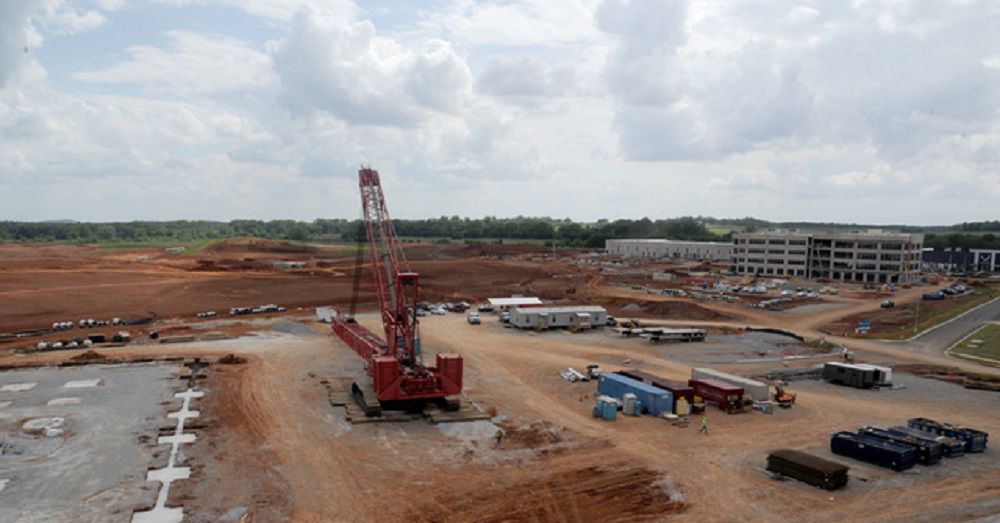 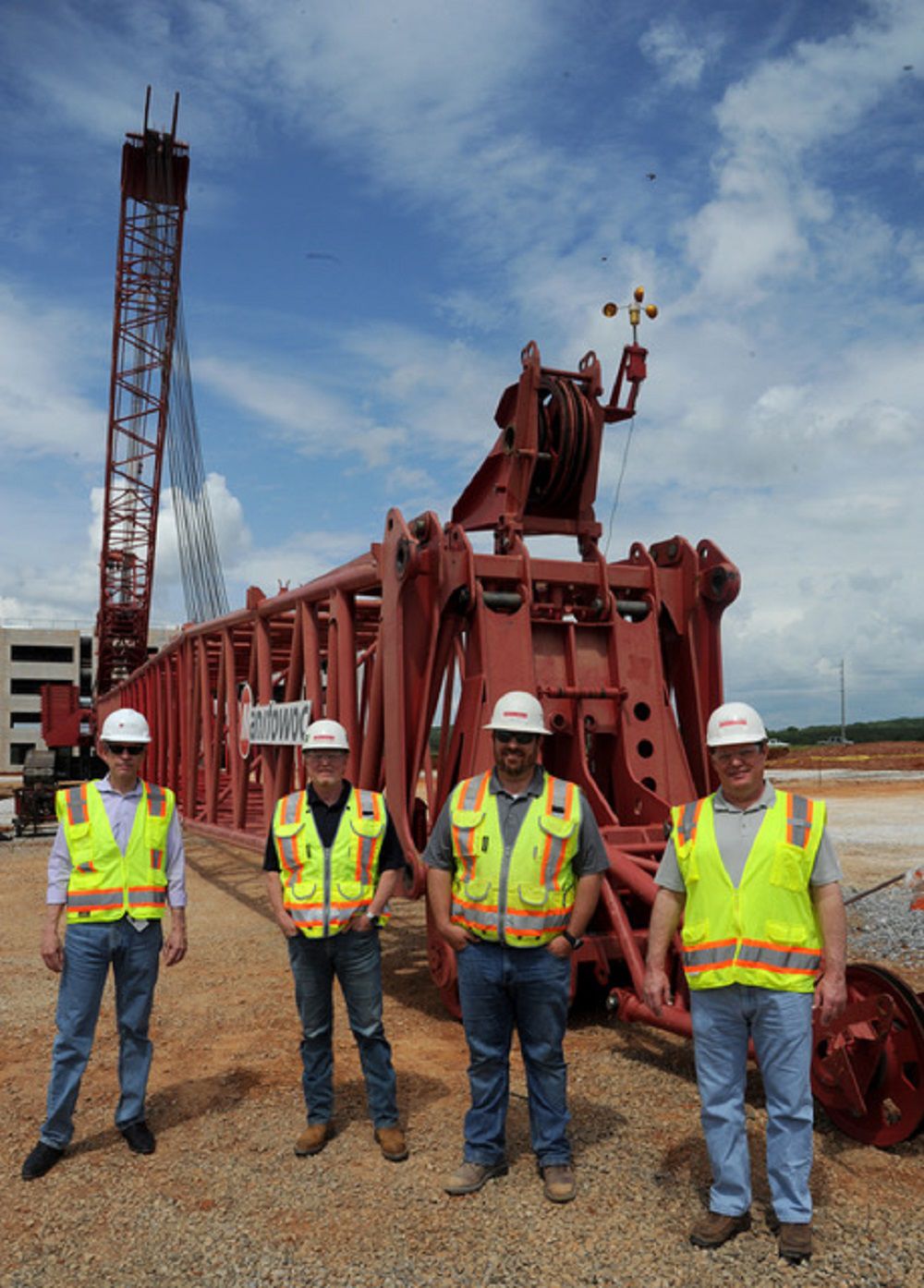 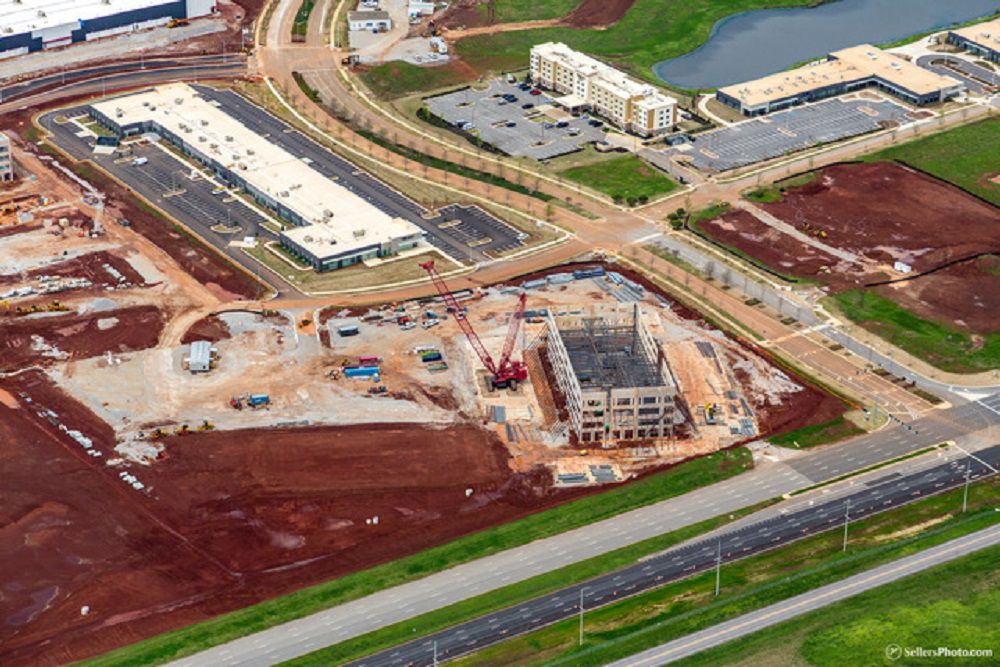 It was hard to miss the big red crane at the Redstone Gateway construction site before COVID-19 hit. The 1.5 million-pound steel workhorse was scheduled to leave Alabama this week after completing a job that was much more complicated than it looked.

“It’s one of the larger cranes we have in our fleet,” Micah Butler of Maxim Cranes said, describing the Manitowoc 18000 crawler with a 180-foot-long boom. “We have one other type of crane that’s twice as large and typically used on big stadium projects, but this is probably the biggest one you’ll see in this neck of the woods.”

Greg Hall hated to see the piece of construction equipment, commonly referred to as “the big red crane,” leave the site because it attracted a lot of attention for the new 468-acre office park at Redstone Gateway. The crane was used for the tilt-wall construction of Redstone Gateway 8000, a 100,000-square-foot speculative building with no named tenants yet.

The building is one of eight active construction projects near Gate 9 on Rideout Road, said Hall, vice president, commercial development for Corporate Office Properties Trust or COPT, which is developing the office park in a joint venture with Jim Wilson & Associates.

“There are a few tilt-wall buildings in Huntsville that are three stories or less,” Hall said. “I believe this is the first four-story tilt-wall in the region.”

And that’s where the big red crane came in.

After Robins & Morton got the job for Building 8000, the specialized crane was reserved and a Federal Aviation Administration permit application was submitted within two days, said Stephen Flournoy, senior project manager on the site. It can take up to 60 days for the FAA permit review, and the company didn’t want to risk delays.

“From a safety and productivity standpoint, in the case of erecting this building, making the decision to use the big red crane was a pretty cut-and-dry decision,” Flournoy said. He said the height and weight of the required panels, the physical capabilities of different crane manufacturers, and the radius in which the crane would operate were all factors in deciding the proper piece of equipment needed to meet safety requirements for effective construction. The crane is referred to as a crawler because it moves on tracks rather than wheels.

“I will tell you that a lot of planning, coordination and brain power went into the monumental movement of that first panel,” Flournoy said.

“This crane is capable of doing a lot of different things, but the process starts long before the excitement of lifting the panel,” Kenny said. “It takes two and a half to three months of work prior to panel erection. Prior to that, it looks like we’re running around the jobsite like ants with minimal progress. Then all of a sudden, in seven days, it looks like the building is up.”

The big red crane is considered a 600-ton crane, Butler said, but it

can be configured to handle 825 tons if needed.

“When you look at anything to do with a crane, it can pick up a lot more weight when it’s right beside what it’s picking up,” Butler said. “But when what you’re picking up is 100 feet away from the center radius of the crane, the overall rated capacity decreases based upon this distance. As such, the technical lift plan required evaluation of everything from lifting the panels to setting the panels.”

Then you have to factor in the weight of the crane itself.

“It takes 35 truckloads to bring all the parts in so the crane can be put together,” Butler said. Depending on when all of the components arrive, it takes two to four days to put the big red crane together.

Flournoy said geotechnical engineers had to calculate ground-bearing pressure and what type of ground reinforcements would be needed for a 1.5 million-pound crane to pick up 200,000-pound panels.

Kenny said the crane had to sit and move on a crane mat. The mats for the big red crane on the job site were made up of 12-foot-by-12-foot-by-20-foot-long timbers bound together in four-foot sections to create 20-foot-by-40-foot mats under each track.

“That’s another nuance folks don’t pay attention to,” Kenny said. “As we moved around the building, we had four truckloads of crane mats, and we leap-frogged those mats around because the crane could only move on top of those mats.”

Forklifts were used to move the mats around the building as the crane moved the panels into place.

“That was a first for me, using mats of that size,” Kenny said.

Flournoy said it’s one of the larger cranes ever used on a Robins & Morton construction site, outside of tower cranes used on high-rise projects.

“To have a crawler of this capacity is not something you see every day,” he said.

Hall, who is more than 6-feet tall, said it’s hard to grasp the true enormity of its size, until you stand next to it.

“The tracks are taller than me,” he said.

That’s true, Kenny said. On the first day of panel erection, he called a panel erection safety meeting, and it started to rain a little. All 20 people involved in the task stepped under the counterweights and were able to take shelter from the rain.

“It’s one of the neatest photos,” Flournoy said. “That gives you some idea of how large the crane really is. While you can see it’s a big red crane from the road, you really can’t appreciate the size unless you can get up close.”