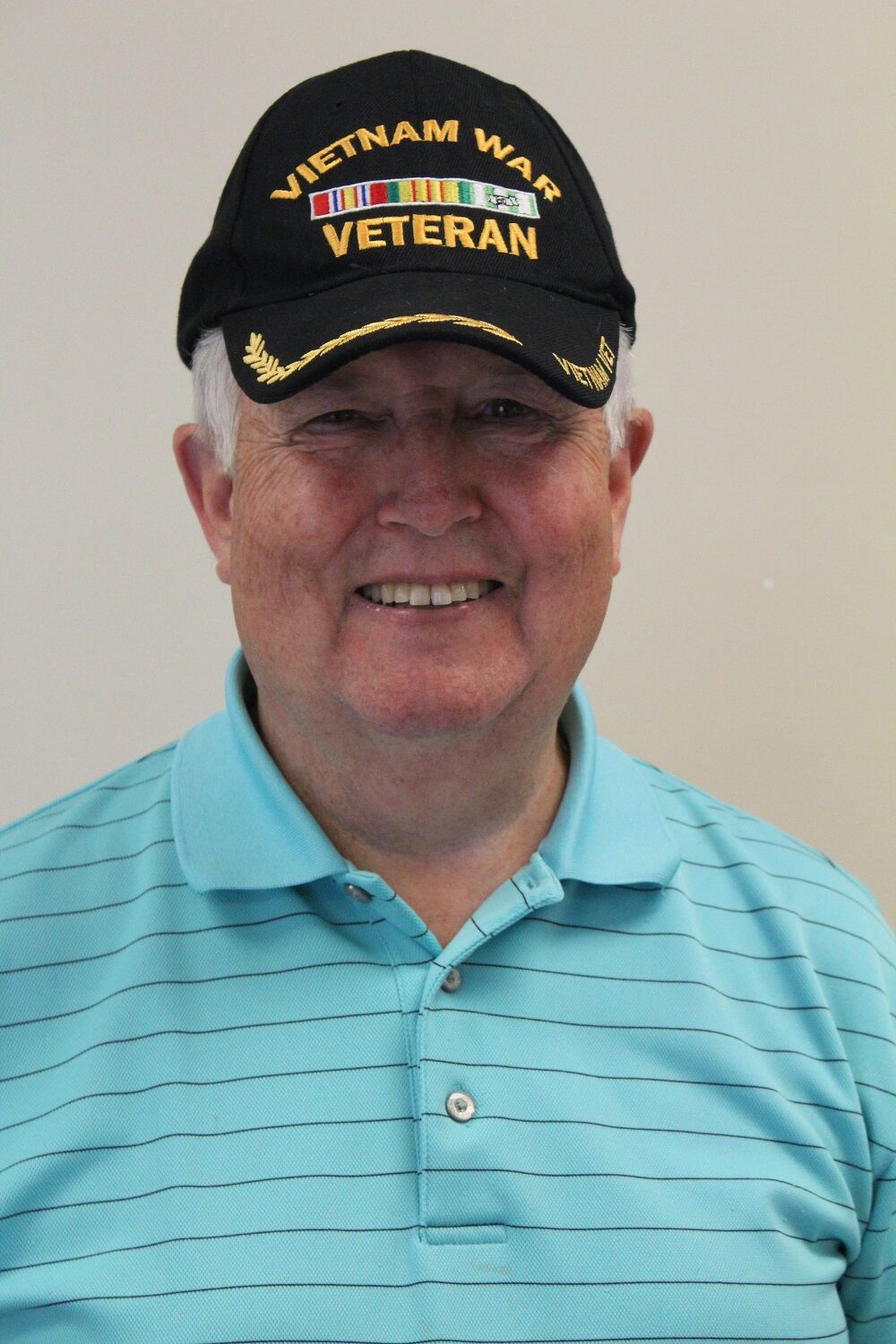 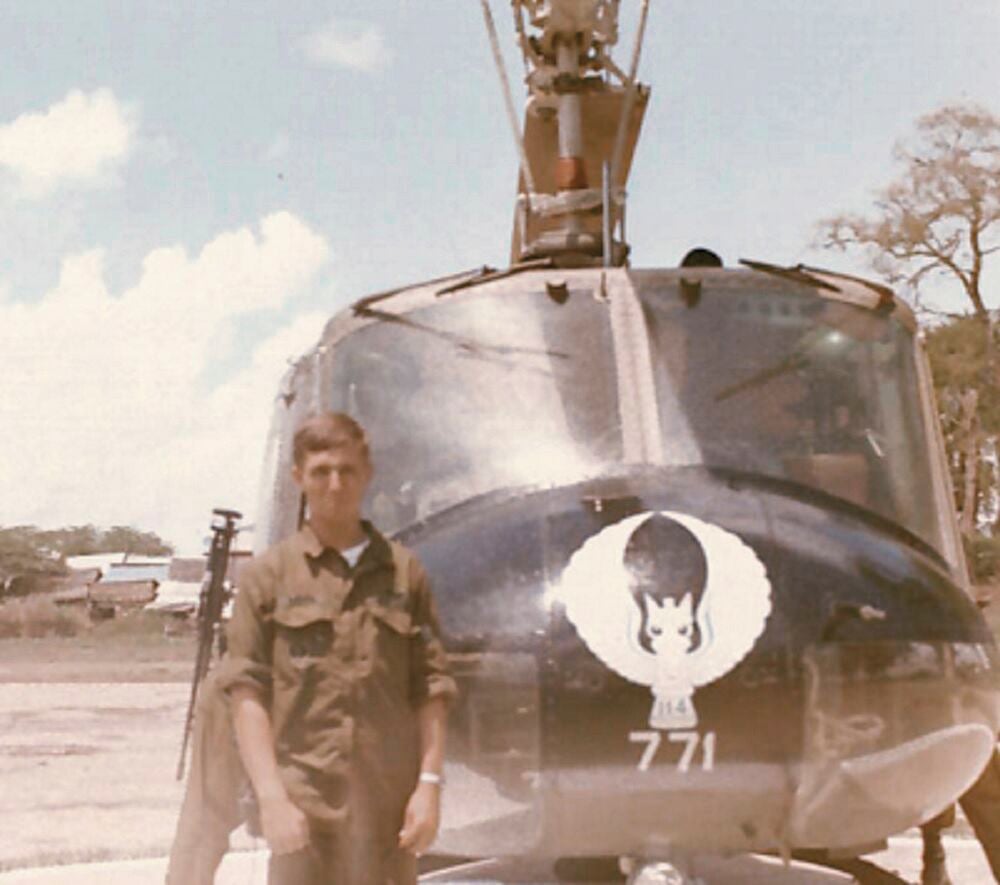 Warrant Officer Malcolm Brown was 20 when he went to Vietnam in August 1969 to fly assault missions in a Huey helicopter. Most happened at night.

“Our adrenaline was up,” he recalled. “You’d come back and your hands start shaking. And you say ‘Oh I could’ve died tonight.’ And you have a beer. And then you’d go do it tomorrow.”

He received 23 Air Medals, some with a V-device for valor, two Bronze Stars and the Distinguished Flying Cross. He flew a UH-1 Huey with the 114th Assault Helicopter Company in Vinh Long. His unit was under the 1st Aviation Brigade.

The Distinguished Flying Cross recognized his role in an extraction mission in July 1970 in the Seven Sister Mountain area.

“There was an outpost with a lieutenant adviser in there and he was being overrun by the Viet Cong,” Brown said. “I was flying high bird that night. The other guy (in the other Huey) was flying low bird. So what happened was I called the lieutenant. I had him on fox mike radio and I said ‘where are you so we don’t shoot you?’ And he just said he was in a bunker. And he said open up anywhere you want.”

Viet Cong were attacking in waves from the perimeter. Others were on the mountain firing down on the two Hueys. “My main job was to suppress the guys in the caves,” Brown said.

“We fought them for four hours. We had to refuel one time. I was firing from the cockpit door with a M-79 which is a grenade launcher.”

The other Huey took a round but the four-man crew aboard each helicopter made it back to the base safely. The lieutenant also survived.

“The lieutenant’s alive. I’d like to meet him sometime,” Brown said with a laugh. “I don’t think I ever will.”

An infantry officer put Brown in for the Distinguished Flying Cross; and he received the medal at Fort Wolters, Texas.

After his yearlong tour, Brown returned to the United States in August 1970. He remembers changing out his uniform at the airport in San Francisco because the Army advised Soldiers not to travel in uniform to avoid war protesters.

“It was the best year and the worst year,” Brown said. “Now let me explain that. The worst part was somebody trying to kill you. And the best part was the camaraderie between individuals of the unit and who you worked with.”

He said he never got shot down but he did have to make at least 10 emergency landings that year.

“The countryside is beautiful. The local people are fantastic,” he said. He remembers the kindness of the older lady, “the mama-san,” who ran the former French enlisted quarters where the Soldiers stayed in Vinh Long.

Brown went on to serve more than 21 years in uniform. This included four years in Korea – 1972-73 and 1984-87. He was scheduled to return to Vietnam for a second tour but got diverted to Korea instead. Brown retired as a chief warrant officer four in 1989. He was recalled for two months during Operations Desert Shield/Desert Storm.

Born in Chicago, Brown was raised in Fort Lauderdale, Florida.

“I went to community college and I wasn’t doing well. My maturity wasn’t up,” he said. “So I wasn’t getting the best of grades and I liked to fly. So I joined the Army (in 1968). And guess what? The maturity came in real quick.”

He had basic training at Fort Polk, Louisiana, and he finished flight school in July 1969 at Fort Rucker. A month later he was in Vietnam. He received a bachelor’s in professional aeronautics from Embry-Riddle Aeronautical University in 1979.

Brown arrived in Huntsville in 1997 from Austin, Texas. He retired about four years ago from Dynetics Corporation.

He and his wife, Jo, will celebrate their 50th anniversary June 12. Their son, David, of Washington, D.C., works in marketing for a cybersecurity company.

“I’m glad they’re finally recognizing us because they didn’t treat us well when we came back,” he said.

Editor’s note: This is the 321st in a series of articles about Vietnam veterans as the United States commemorates the 50th anniversary of the Vietnam War.