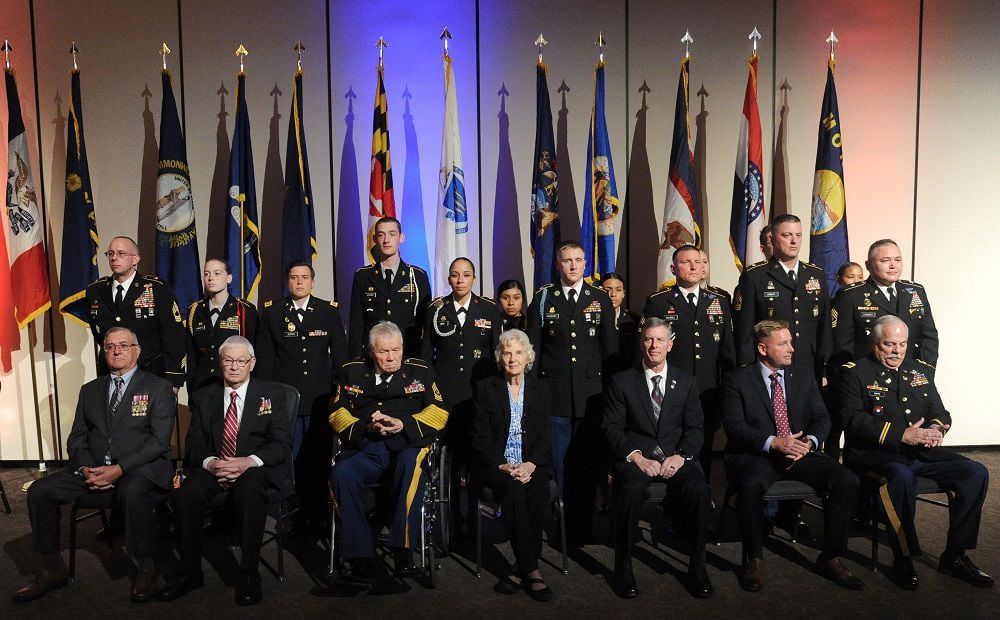 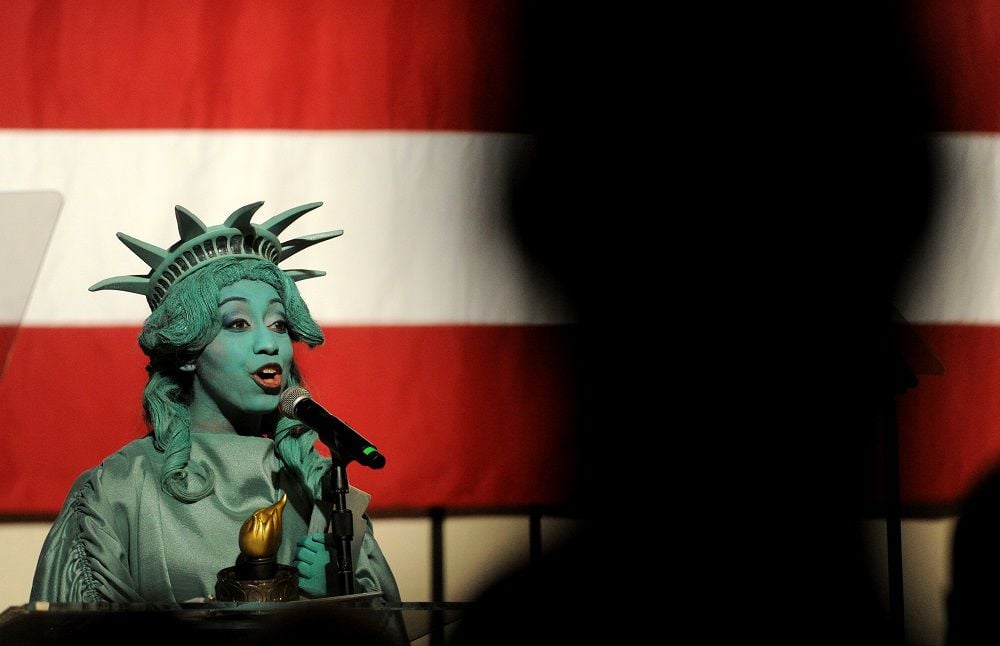 The drama that occurs on the battlefield was highlighted as seven Soldiers were inducted into the Madison County Military Heritage Hall of Heroes at the 2019 Huntsville-Madison County Veterans Dinner.

There was applause, cheers and standing ovations throughout the event held Friday at the Von Braun Center South Hall.

“This year’s inductees, as in years past, exemplify what courage and sacrifice mean for our country,” Tom Kennemer, of the Madison County Military Heritage Committee, said as he recognized the seven Hall of Heroes inductees of which five were also added to the Purple Heart Honor Roll, which is housed in the Madison County Courthouse.

Charles “Skip” Gill served 23 years in the Army, retiring in 1989 as a lieutenant colonel.

Kennemer gave a snapshot of what happened on May 24, 1969, when then 1st Lt. Gill was acting troop commander and platoon leader with Troop A, 1st Squadron, 11th Armored Cavalry Regiment in Vietnam.

“While moving through an enemy base area, two of the troop’s platoons came under intense hostile fire … After directing his vehicles into an assault formation, Lt. Gill relinquished overall command to the troop commander and then he moved in front of his platoon to lead the attack on the enemy fortifications,” Kennemer said. “Gill was wounded when a nearby vehicle received a direct hit by an enemy rocket propelled grenade. Disregarding his wound, Gill helped organize the evacuation of the wounded and to assist in extinguishing the flames that had engulfed the vehicle. Only after he was assured that all of the other friendly casualties had received proper assistance did he allow a medic to treat his wound. He received the Silver Star for his actions. He also received two awards of the Bronze Star Medal With Valor and Army Commendation Medal With Valor.”

Gill was also added to the Purple Heart Honor Roll.

David Roesler is a 1964 West Point graduate who served 26 years in the Army.

“On a search and destroy mission on Feb. 27, 1968 while serving with Troop A, 1st Squadron, 1st Cavalry, Roesler distinguished himself by heroic actions when his troop made contact with two main-force Viet Cong battalions in well-entrenched fortifications,” Kennemer said.

“Receiving heavy hostile fire from both the front and the flanks, Roesler immediately deployed his forces in a professional and calm manner. In order to maintain the direction of the attack, he positioned himself with the point element during his troop’s advance and was able to lead his forces into and through the enemy positions.”

Kennemer shared that during the battle, the enemy fire became so intense that Roesler ordered his track crew to seek shelter inside the vehicle while he remained exposed in the hatch continually returning fire and directing his troops.

“At one point, in order to disengage his unit in a change of maneuver, he called in aerial rocket artillery to within 10 meters of his tracks,” he said. “During the five-hour encounter, Roesler exhibited great personal bravery, aggressive leadership and dauntless determination. For his actions that day he was awarded the Silver Star. Roesler’s unquestionable valor while engaged in close combat with a numerically superior hostile force, is in keeping with the highest traditions of the military service and reflects great credit upon himself, the Americal Division and the U.S. Army.”

Retired Sgt. Maj. Eugene Cope is a veteran of 26 years in the Army and all of those years in some capacity, dealt with explosives.

“Many would say it’s fortunate he’s still in one piece,” Kennemer said. “I think it’s also due largely to being an expert in his field.”

Cope is the recipient of the Soldiers Medal for his brave and heroic action to save the lives of fellow Soldiers during a controlled demolition disposal exercise in August 1968 in the Republic of Vietnam. Cope was with the 44th Ordnance Detachment which had prepared a demolition site for five tons of explosives recovered from Viet Cong storage locations.

“A team of guards had been placed surrounding the demolition area to keep fellow Soldiers and locals from wandering into the area. The guards were instructed to remain on watch until a signal was given to clear the area. When that signal was given two of the guards mistakenly were approaching the blast area,” Kennemer said. “By this time, the fuses were already ignited and the explosives were to go off in less than five minutes.”

Kennemer said it was too late to safely pull the fuses so Cope, without hesitation, jumped from his secure location, started running and yelling to warn the guards of the impending blast.

He reached the Soldiers and all were able to crawl into a ditch some 50 yards from the blast. All received minor wounds and ringing ears but were fortunately OK.

Cope is also recipient of the Army Commendation Medal with Valor and the Purple Heart. He received his Purple Heart for wounds suffered during hostile action in 1969. Kennemer said Cope said there are some discrepancies as to the number of times he was wounded, but the Army does recognize at least one.

Jewell Toney was an Air Force veteran who died earlier this year. Kennemer said during the Korean War, Toney flew more than 50 combat missions. He distinguished himself through outstanding achievement while participating in aerial flight as gunner of a B-26 attack bomber, 3rd Bombardment Wing, Fifth Air Force.

“Toney displayed outstanding airmanship and gunnery skill while on armed reconnaissance over enemy rail lines in North Korea on the night of Jan. 28, 1953. During that mission, an enemy locomotive and a concentration of boxcars were sighted and despite hostile ground fire, were immediately taken under attack in a series of low level bombing and strafing passes,” he said. “Toney coordinated his fire with the pilot, utilized superior gunnery skill and scored several direct hits on the enemy targets.”

The aggressive and highly effective attacks resulted in the destruction of the locomotive and six boxcars depriving the enemy of vital rail transportation equipment.

For his skill, courage and devotion to duty on that successful mission in North Korea, Toney was awarded the Distinguished Flying Cross. He was 19.

Curtis Potts served 29 years in Army aviation and as a special operations officer. On March 20, 2003, Potts was commander of the 4th Brigade Aviation, 3rd Infantry Division which initiated the ground war for Operation Iraqi Freedom.

“He commanded and controlled from his Black Hawk helicopter the destruction of the Iraqi border posts with his AH-64 Battalion, effectively opening the corridors for the ground forces to pass through,” Kennemer said. “After his attack battalion commander’s aircraft went down, Potts assumed control of the AH-64 helicopters, directing their fire per the mission profile.

“During the initial contact at the border, he was instructed to move from his position to allow for cruise missiles to safely pass through his aerial holding point. Potts elected to stay on station to maintain positive control of his attack aircraft by increasing his altitude to 1,500 feet to allow the cruise missiles to pass under his helicopter’s safe zone. He continued to control the air assault shaping the maneuver space for the ground brigade combat teams as part of the main effort on the March to Baghdad.”

Potts was in direct command of all 3rd infantry aviation assets for more than 24 hours straight, switching out C2 aircrews as necessary to personally stay in the fight to support the ground troops mission, he said. For his courageous leadership and steadfast devotion to duty during this period, Potts was award the Distinguished Flying Cross.

Potts is also the recipient of the Joint Service Commendation Medal with “V” Device.

As commander of the 4th Brigade Aviation during Operation Iraqi Freedom, Potts accepted the surrender of more than 16,000 Iraqi troops near the town of Ar Ramedi. It is the only surrender of enemy forces to the U.S. since World War II, Kennemer said.

Michael Ray Williams enlisted in the Army in 1987. He was trained to work on helicopters but he wanted to fly them. He became a helicopter pilot and later an instructor at Fort Rucker. He served two tours in Iraq and one in Afghanistan and after 23 years in Army aviation, Col. Williams retried earlier this year.

He is the recipient of an Air Medal with Valor for his actions on June 12, 2003.

“While serving with Alpha Company, 3rd Battalion, 101st Aviation Regiment during Operation Iraqi Freedom, Williams was cited for his heroic aerial achievement while serving as co-pilot/gunner during ground combat operations against terrorist forces,” Kennemer said. “Much of this mission is still classified, but what we can tell you is that Williams, with four Apache helicopters under his command, made several runs in the early morning hours on a terrorist encampment, destroying the compound.”

He said Williams was praised for his flying expertise and effective leadership that preserved the lives of American Soldiers during the battle.

“Williams received a Purple Heart for injuries received after his Apache helicopter was shot down during the assault on the terrorist camp. As his aircraft was going down it caught fire and landed nose first into the side of a ridge,” Kennemer said. “As Mike put it, this type of landing left him with a broken back and broken pride. Even with these injuries he was able to get out of the burning craft and make his way to a nearby Ranger unit.”

Robert “Rick” Davis served 20 years in Army aviation, retiring as a chief warrant officer in 1986. He distinguished himself by exceptionally valorous actions while serving with Troop D, 3rd Squadron, 5th Air Cavalry in May of 1970 in the Republic of Vietnam.

“Davis was flying a Cobra attack helicopter, part of a team consisting of two OH-58 Scouts and two Cobras to seek out and destroy enemy locations,” Kennemer said. “While providing overhead cover for the Scout helicopters in the Delta region of South Vietnam, the Scouts began taking heavy small arms fire from a nearby tree line. After the area was neutralized by the Cobras, infantry troops were inserted and they discovered a large cache of enemy equipment and a battle plan that indicated six .51 caliber machine guns in the area. Davis and his team worked the rest of the day to locate and destroy five of six machine guns.”

Back on patrol the next morning, the lead Scout helicopter located the sixth machine gun but was immediately shot down by intense enemy fire.

“Since there was no other aircraft available to help, the lead Cobra and trail Scout aircraft landed to attempt rescue of the downed crew. To provide cover for the rescue attempt, Davis, flying the trail Cobra, repeatedly maneuvered his aircraft to execute gun runs and engage the enemy with rockets and cannon fire until the rescue was completed,” Kennemer said. “Both downed crewmen, with severe injuries, were successfully rescued and flown to a hospital and survived.”

Davis was awarded the Distinguished Flying Cross for his actions. He is also the recipient of two Air Medal with Valor Medals and the Purple Heart.

“He was wounded during his first week in Vietnam when a bullet penetrated the floor of his helicopter and lodged in his leg,” Kennemer said. Davis “says part of the bullet is still there.”