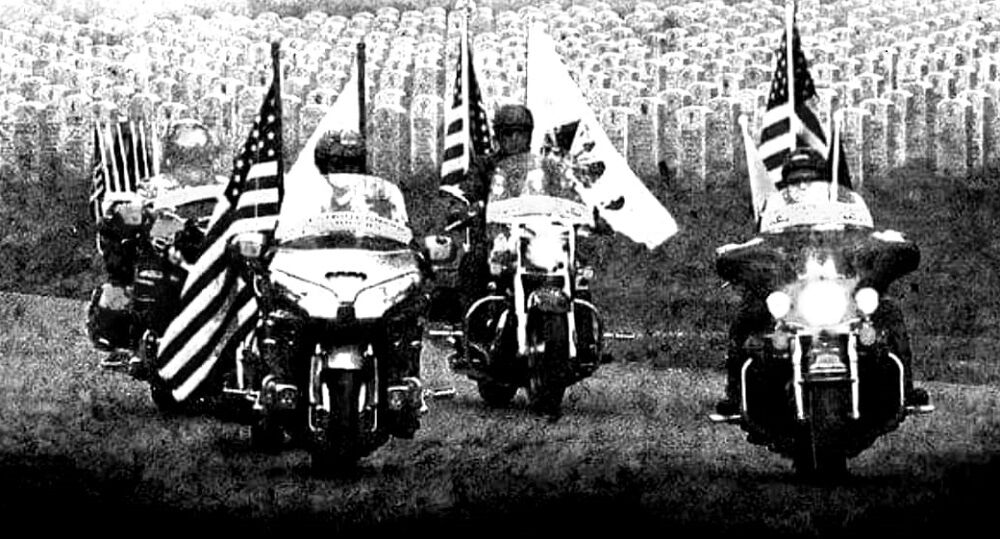 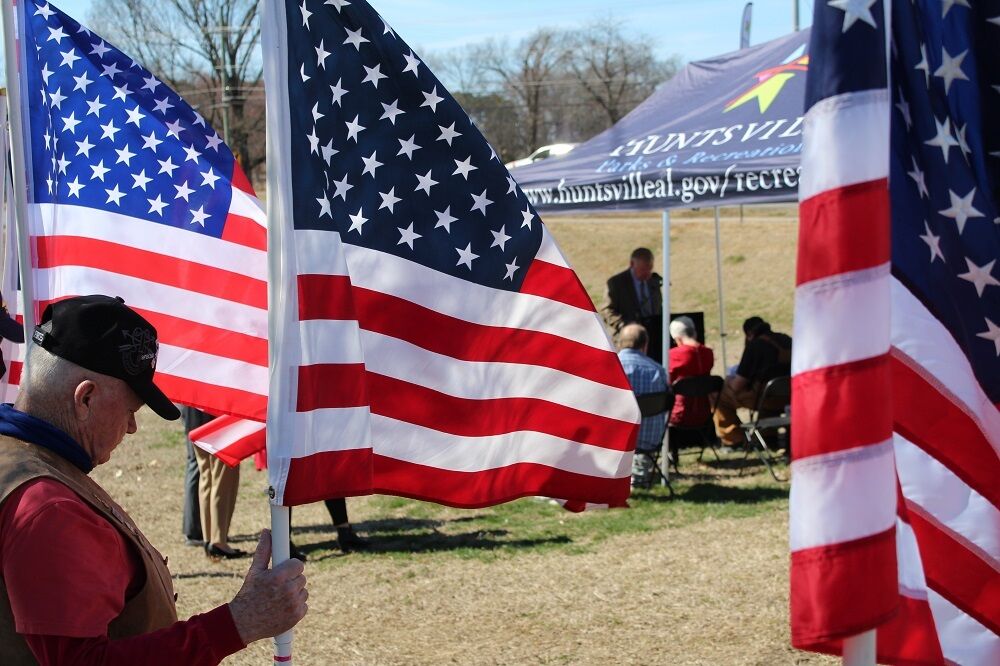 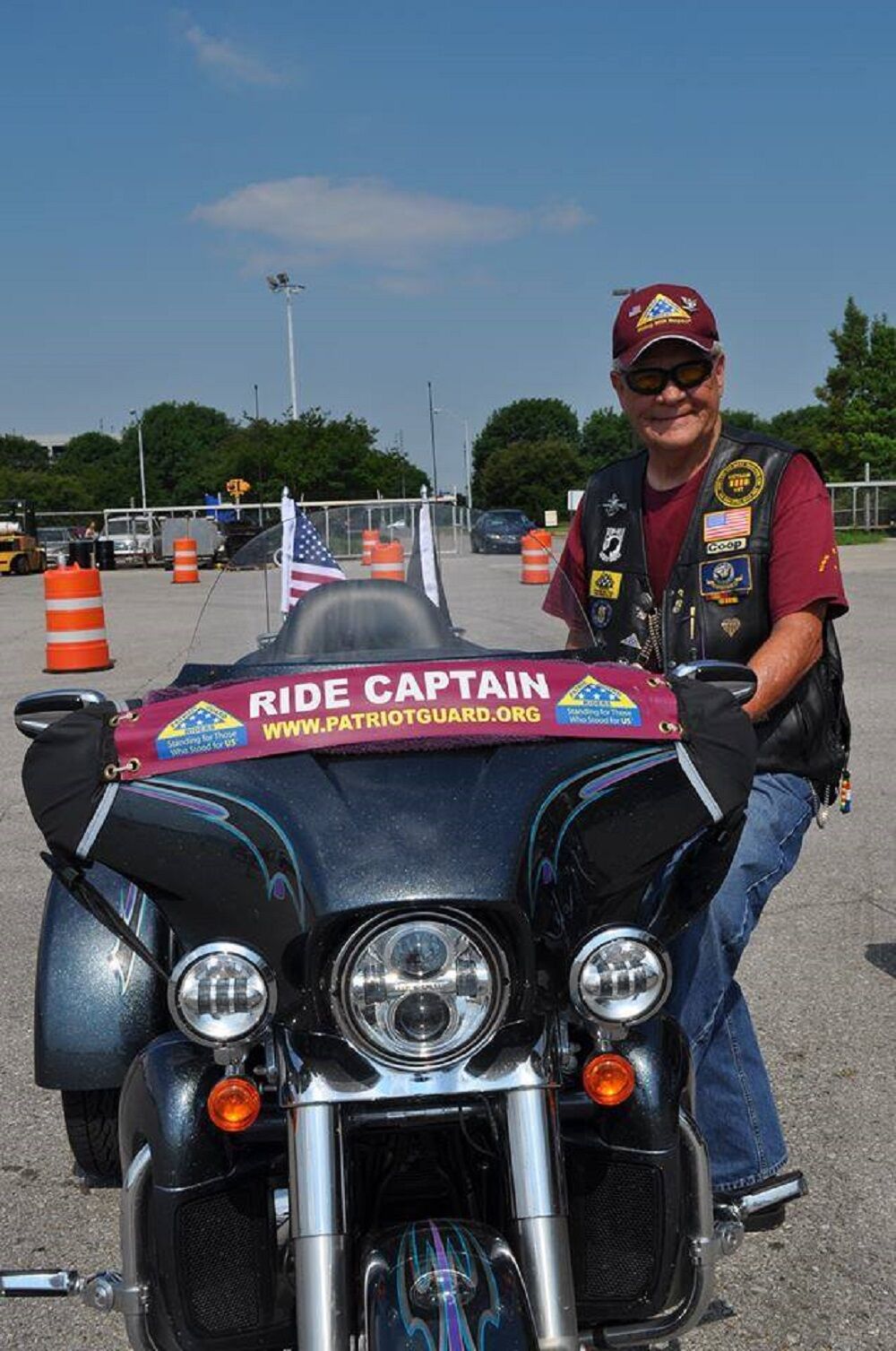 For the past 16 years, a group of volunteers has stood guard to ensure proper respect is paid at patriotic ceremonies and funerals for veterans and first responders.

The Patriot Guard Riders is a nationwide group formed in 2005 because of church protests at military funerals. Vietnam veteran John “Coop” Cooper joined in July 2007 and he has been the North Alabama district ride captain six years.

His district of about 300 members goes from Cullman and Gadsden north to Tennessee, and east and west from Georgia to Mississippi.

Cooper updated the members on planned events, flag etiquette and proper conduct during a monthly meeting April 3 in Huntsville.

“Honor, dignity and respect is so important to what we do,” he said.

The members carry the flag at veterans events, parades and memorials and they serve as funeral escorts at churches and national cemeteries including Montevallo in Alabama, and in Nashville and Chattanooga. Cooper and many of the members ride motorcycles but that is not a requirement. Alabama and its local chapters are within the Dixie Region. People interested in joining can visit www.patriotguard.org.

“It’s actually a ministry for me,” Cooper, 72, said. “We honor the fallen veteran – doesn’t matter if they’re retired or whatever. And we honor the families. We protect the families. And we don’t allow anything to interfere with their funeral or service anywhere. And we do the exact same thing for first responders.”

Tama Morgan, 58, of Huntsville, joined the Patriot Guard Riders in 2016 and she is a senior ride captain. “I’ve always kind of been a veterans supporter,” she said.

The year she joined, Morgan had the honor of placing the Patriot Guard Riders wreath during the veterans ceremony on Memorial Day at Maple Hill Cemetery.

She got a 2006 Harley-Davidson Sportster 1200 nearly a year before she joined the group. She said she had always wanted to ride a motorcycle. Her patriotism and her motorcycle riding led her to the Patriot Guard Riders. “So it all just fell in together right there,” she said.

“It gives me something to do so I can honor veterans. It’s a way to give back, and so my patriotism to the military and to the flag. The families are so appreciative for us being there. It just warms your heart. I can’t put a price tag on that. Anything you do it makes it so worth it. You’re doing this to comfort the family of the veteran and show your respect for him.”

Al Reed, 71, of Huntsville, joined the group in 2007 along with his friend Col. Stephen K. Scott. Reed retired in January 2008 as a senior program analyst from the Aviation and Missile Research, Development and Engineering Center. Scott returned to Iraq and got killed that April. The Col. Stephen K. Scott Fitness Center is named in his honor.

“When I retired from the military I knew I wanted to be in support of Redstone, all of the activities on Redstone and various activities with veterans,” Reed, a retired chief warrant officer three, said. “When Col. Steve Scott died, I handled the arrangements with the Army for him. So handling the arrangements for him and his family, I knew that’s what I wanted to do.”

Reed, a ride captain, rides a Harley. He said one of his memorable missions with the group was during the Honor Flights when World War II veterans were taken to Washington, D.C., to see the WWII memorial. The Patriot Guard Riders traveled to Murfreesboro, Tennessee, to escort a 96-year-old WWII veteran to the Huntsville International Airport so he could catch his Honor Flight to Washington. They put the veteran on the back of a Harley and escorted him to the airport. Reed said this happened in 2013.

“And there were 103 motorcycles,” he recalled. “So our job was to lead and keep everybody safe and all that stuff.”

LeVon Myrick, 64, of Hazel Green, is retired from Madison County after working in the engineering department for 30 and a half years. He and his wife of 20 years, Cindia, have been members of the Patriot Guard Riders about three years. They carry water and supplies in their truck and they also serve as flag captains.

“And both of our dads are World War II veterans. That’s kind of how we got started doing this,” Myrick said. Cindia and member Buster Mills, assistant North Alabama district ride captain, have known each other since childhood.

“Cindia and I thought this would be a good way to give back. Our dads would appreciate this stuff,” Myrick said.

He said one of their memorable missions was when they brought the flags for an April 6, 2019, ceremony honoring the remains of a sailor from Albertville who was killed in World War II. Seaman 2nd Class Ira Novis Slaton was aboard the USS Colorado, in the Northern Mariana Islands, which took 22 shells killing 43 and injuring another 198. He died in the attack July 24, 1944.

Asked why they volunteer with the Patriot Guard Riders, Cindia said, “They (the veterans) already paid for it. They paid the price by serving.”

Brian Ball, 52, of Big Cove, is a contract specialist for the Army Contracting Command-Redstone. The retired Navy petty officer first class, who was a missile technician on submarines, joined the Patriot Guard Riders in November 2009. The ride captain rides a 2000 Harley-Davidson Fatboy.

“Basically as a veteran you feel some kinship to all these veterans. We do feel some kinship,” Ball, a Huntsville native, said. “I really feel like they deserve our gratitude for what they do. Those guys that actually went to battle, those are the guys that really deserve our respect. I enjoy the camaraderie of the members. It’s just good to be with other people that are willing to pay honor to people who sacrificed for this country.”