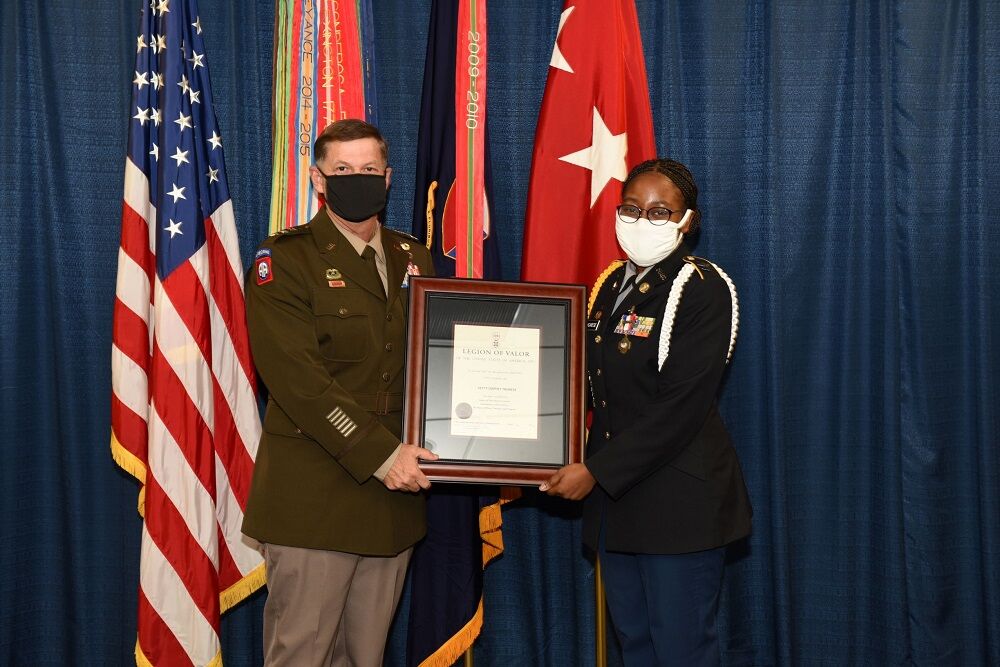 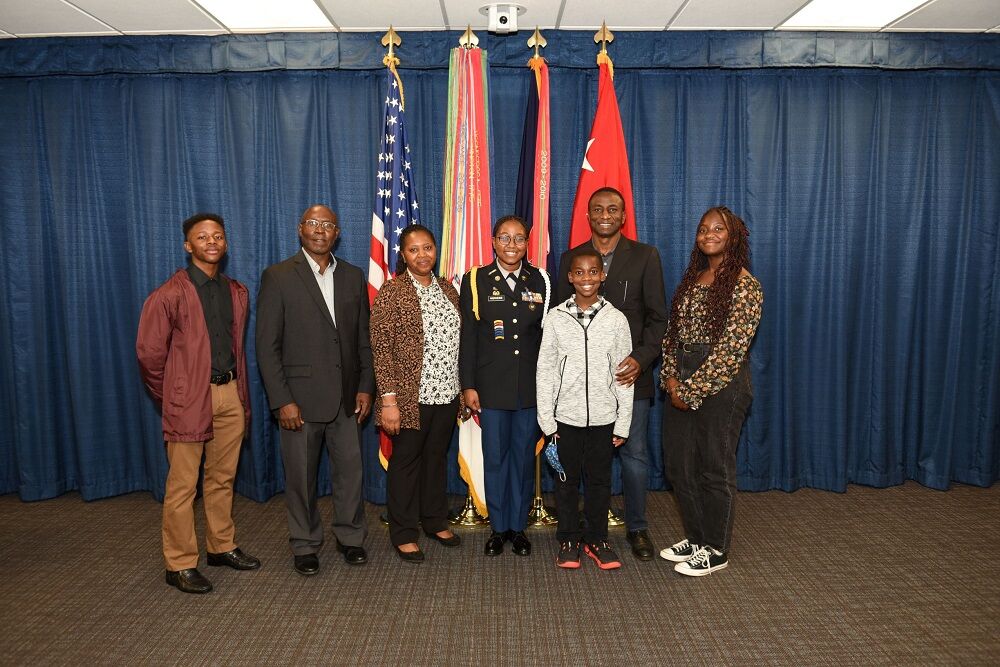 A Lee High School/New Century Technology High School JROTC cadet was honored Nov. 9 at Army Materiel Command headquarters with a Legion of Valor Bronze Cross for Achievement, making her the first JROTC cadet in Alabama to receive the award.

“There is nothing more important than being here and recognizing a young leader who may be a leader of our Army someday and certainly a leader of this great nation in the future,” Walker said.

“At a time when only half of 1% of American citizens volunteer to serve in our armed forces, it is refreshing to see young men and women like Ketty-Daphney Ngwese step forward and support not only her community but also the greatest nation on Earth. Ketty and young people like her give us confidence as we look to the future.”

The Bronze Cross is a Department of the Army award sponsored by the Legion of Valor, an organization whose membership is limited to those who have either been awarded the Medal of Honor or the Distinguished Service Cross for gallantry in combat.

Ngwese is a senior a New Century Technology High School, which is co-located with and shares some classes with Lee High School in northeast Huntsville. Ketty serves as the cadet commander of the Lee High/New Century JROTC program, and as the first JROTC cadet from Huntsville City Schools to serve as the president of Alabama JROTC. Her leadership and academic excellence – a 4.8 grade point average – garnered the Legion of Valor Bronze Cross for Achievement.

Walker thanked Ngwese’s family, and her mentor, teacher and coach retired Col. Diane Richie, the senior JROTC instructor at Lee High/New Century, saying it’s important to reflect on the significance of the prestigious award and what she accomplished to gain it.

Besides her work as the Lee High/New Century JRTOC cadet commander, Ngwese also serves on its drill team and color guard, and is a member of the Lee High School marching band flag team. She aspires to attend Howard University.

“She also dedicates herself to aiding her fellow classmates with homework, and she helps at home with her siblings,” Walker said. “That shows she is an ultimate team player and a great role model.”

Ngwese joined JROTC as a freshman at the urging of her cousin Joel, who was a year ahead of her in high school and who has joined the Army National Guard and will soon be an ROTC cadet at the University of Alabama in Huntsville as part of the Army’s Simultaneous Membership Program. Ngwese thanked her family for their support of her decision to join JROTC.

“JROTC has opened so many doors for me. So many great opportunities have come from my decision to join JROTC,” Ngwese said. “Col. Richie saw so much potential in me that I didn’t even recognize as a freshman. Truly, all of you have brought me to the place I’m at today.”

Ngwese also expressed her appreciation to Walker, who spent a few minutes meeting with the cadet and her family prior to the ceremony, and to AMC for honoring her at the ceremony.

“Thank you, Lt. Gen. Walker, for including me and my family. It is such an honor for someone who represents the Army and the nation to do this for me, and thank you for being such a wonderful person,” she said.

Following the ceremony, JROTC senior instructor Richie said she could tell when Ngwese was a freshman that she was destined for success.

“My introduction to Ketty happened during a flag detail on a blustery, cold day,” Richie said. “The other cadets were moving about trying to stay warm. But Ketty was there positioned at attention with the Alabama state flag. I said to myself, ‘that kid has got something.’ I watched her grow in her high school experience to who she is today.”

Richie said the committee who selects the recipients of the Legion of Valor Bronze Cross for Achievement got it right when they selected Ngwese.

“She exemplifies selfless service and is academically solid,” she said. “Her future is hers. I am so proud of her and the commitment she has made to her future. With her determination and steadfastness, whatever Ketty decides to do with her future I have no doubt in my mind she will be successful.”