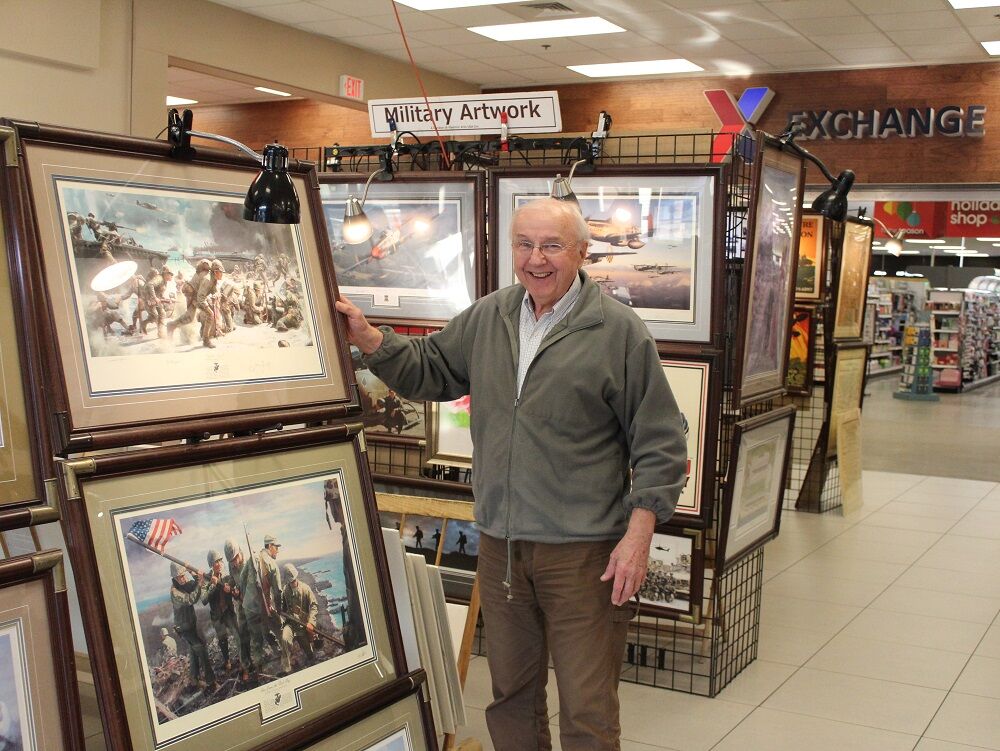 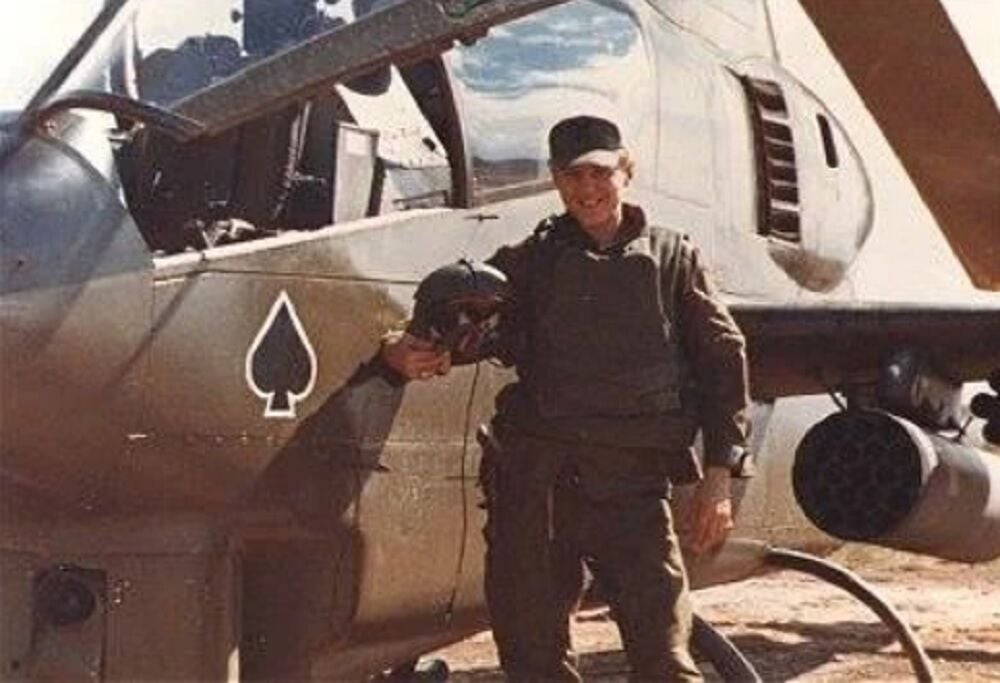 This Vietnam veteran’s life is as varied as the myriad of military paintings he sells. Lew Iwlew was born in a refugee camp in Ladhe, Germany, after World War II, exactly nine months after his parents were reunited from being apart for two years in labor camps.

He was 5 in 1951 when his family was sponsored by a church organization and sent from Germany to Kalamazoo, Michigan. His father moved into an apartment with a friend from Russia. The two families, a total of eight people, shared a two-bedroom apartment.

“with six credit hours and a straight D average,” he said. The beginning freshman was drafted in 1965. “I still remember my draftee number, US55866769,” he said.

At basic training, the Kalamazoo resident was one of two draftees selected to apply for officer candidate school. He eventually went from Fort Jackson, South Carolina, to Fort Benning, Georgia, for OCS.

Iwlew was a 22-year-old first lieutenant when he arrived in Vietnam in January 1969. He became a Cobra helicopter pilot. He was there until September 1970, a total of 19 months and 19 days including his voluntary six-month extension. Iwlew served with the 4th Aviation Battalion, 4th Infantry Division, in the central highlands. That was the Pleiku and An Khe area.

“When I arrived as a first lieutenant, I replaced a major as the battalion aviation maintenance officer,” Iwlew, founder and president of Vladimir Arts, a longtime concessionaire in the Army and Air Force Exchange Service, said. He served in that role for 12 months and then extended his tour six months and became the operations officer of Bravo Company, flying Cobra gunships.

He flew about 700 combat hours during his 19 months in Vietnam. He received an Air Medal with 11 clusters, and two Bronze Stars.

“We had different missions. One of the missions, we were on call and we would only fly if we were scrambled. And if we were scrambled, there was action,” he said. “The other mission that we had was what we called the hunter/killer teams. And that would be a mission that required two Cobras and an OH-6 (observation helicopter). And what that would consist of would be from intelligence information – intel – we would be designated an area in Vietnam to fly over. And the LOH (light observation helicopter) would be flying right over the treetops low. We would be following the LOH, the two Cobras, at an altitude high enough where we would not be hit with small arms fire. So the LOH would actually have a sniffing device, an odor detecting device, that would be operated by the crew chief.

“And they would be zipping along at about 140 kilometers an hour right over the treetops in this designated area that we were assigned until the machine detected a reading – in other words, got an odor smell. At which time they would radio to us that they got a hit, that would alert us. They would do a 180, go back to that area, and would visually try to see movement – the bad guys – sometimes hovering right over the trees. In many cases, they were just sitting targets.”

Iwlew left Vietnam as a 24-year-old captain. In about the last three months of his tour, he served as the executive officer for Bravo Company. He described the rush of adrenalin when his Cobra crew started firing their minigun or grenades and their 2.75-inch rockets.

“Things are going so fast that they’re almost slowed down. And you see these red things coming at you. And you know that those are the tracers,” he said. “And you know there’s six rounds between them that you can’t see. And your adrenalin’s going so quickly and you’re doing what you have to do. And it’s like you’re wearing a Superman’s shirt and you’re impervious to those rounds coming at you. Sounds silly, doesn’t it?”

His helicopter did take hits and he made at least two emergency landings with power; and he had one engine failure. Iwlew said he tried to forget the bad things and he mostly remembers the popular Neil Diamond rock song from 1966, “Solitary Man.”

Iwlew served on active duty from 1965 to 1975, and from 1975-88 in the Reserve until leaving as a major. He started Vladimir Arts in 1975. “I think we’re the oldest running concessionaire with AAFES today,” he said.

The Richland, Michigan, resident travels throughout the exchange system, including visiting the Redstone Exchange twice yearly. His seven-member staff includes his wife of 42 years, Iris, the vice president, and their two sons. Their oldest, Berin, of Kalamazoo, runs the website. Scott, of Arlington, Virginia, runs the East Coast operation. The couple adopted a girl from Russia in 1996, Ola, now 30, who lives in North Carolina with her husband who serves in the Air Force.

Iwlew, 75, belongs to the Veterans of Foreign Wars and the Helicopter Pilots Association. He has an 80% disability rating from Veterans Affairs. He likes sports and roots for the Detroit teams. “And I enjoy the sunrises over the lake where we live,” he said.

“I think it’s been blocked out because of all the problems that we presently have being a divided country,” Iwlew said. “I abhor the far left and the far right. Somehow we’ve forgotten that there’s a middle.”

Editor’s note: This is the 347th in a series of articles about Vietnam veterans as the United States commemorates the 50th anniversary of the Vietnam War.