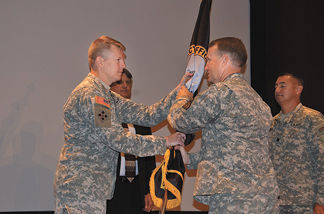 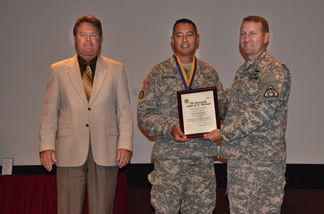 The Program Executive Office for Aviation saw a change in leadership with its Common Engines product office, part of the Utility Helicopters Project Office, during a change of charter ceremony June 17.

Kuykendall, an infantryman, was CE’s first product manager when it was officially stood up June 14, 2012.

The change in leadership is really about passing the flag to the next person who has the opportunity and privilege to serve, said Col. Thomas Todd, project manager for Utility Helicopters. “I know that you (Kuetemeyer) are looking forward to this opportunity to do something extraordinary.”

For Kuykendall, that something extraordinary three years ago was to manage the life cycle of the Army’s newest helicopter engine called the Improved Turbine Engine Program or ITEP. Todd said that while the office struggled to get the program started, Common Engines did everything it needed to do “to get it right the first time.”

Todd and Kuykendall served in the Pentagon at the same time a few years ago where Todd came to know his future product manager. “We needed you badly,” Todd said. He needed a PM who could get through the maze of the Pentagon and the numerous authorizations that would be required to get the program started.

Todd said Kuykendall also realized he was on the cusp of doing something good and came into the office with the mentality of making it better. “He is leaving this office much better than when he found it,” Todd added.

Todd credited Kuykendall for taking ITEP through some major milestones. In October 2012, the ITEP was initiated with approval of the Material Development Decision. An Analysis of Alternatives was then completed, confirming the need for a new development engine with a signed sufficiency memo in October 2014. An Army Systems Acquisition Review Council was conducted in the same month, gaining approval to release a Request for Proposal for a Preliminary Design Review contract in the spring of 2015 followed by a Milestone B in fiscal 2018.

“We needed somebody we serve in Army aviation – a U.S. Army Soldier on the ground saying, ‘This is important.’ He had the ability to communicate that to our senior leaders at the right time,” Todd said.

Todd first met Kuetemeyer at a Pre-Command Course at Fort Rucker and knew that he would be the right person to succeed Kuykendall in the job.

“The Army has once again chosen the right leader at the right time,” Todd said.

The ITEP is one of the Army’s top modernization program priorities that will enable the attack and utility helicopter fleet to fly faster, farther and at higher altitudes than the current capability. With its 3,000 shaft horsepower turbo shaft engine, the ITEP will replace the current T700-GE-701C/D family of engines that has 1,900/2000 horsepower, for the UH-60 Black Hawk and AH-64E Apache fleets.

The ITEP provides significantly increased operational capability, fuel efficiency, range and payload to meet Army mission requirements. It will provide critically needed operational improvement in hot conditions at high altitudes, with a significant fuel consumption decrease, maintenance cost decrease and will incorporate a Condition Based Maintenance plus package, and a horsepower-to-weight increase. ITEP will also lower overall maintenance for the utility/attack variants of the Army’s helicopter fleet and will save lives now lost moving and protecting fuel on the battlefield, and will lighten the logistics load.

As a non-aviator, Kuykendall said he was honored to have received the Honorable Order of St. Michael Award from the Army Aviation Association of America, which was presented to him at the ceremony. “This means a lot to an infantryman,” Kuykendall said, crediting his team for the successes gained in the product office.

In addition to the St. Michael award, Kuykendall also received the Meritorious Service Medal. His wife Melissa was recognized with the Soaring Hawk certificate from Utility Helicopters Project Office. Kuykendall will serve in the Pentagon again for a year before moving to his next assignment.

“This PM office has earned the reputation for being forward thinkers,” Kuetemeyer said. He thanked Kuykendall for leading the team over the last three years. “I promise I’ll give you my very best.”