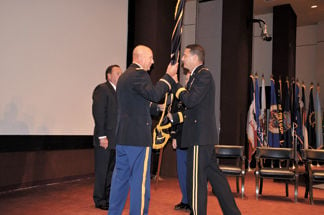 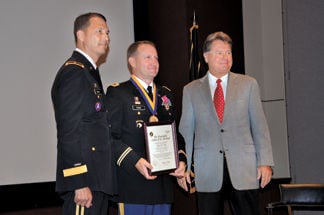 It’s the season for change within the Program Executive Office for Aviation.

Thursday marked one of the organization’s key leadership changes, one of several this summer, when Col. Thomas Todd relinquished responsibility of the project office for Utility Helicopters to Col. Billy Jackson during a change of charter ceremony at Bob Jones Auditorium.

As project manager for the past four years, Todd led the cradle-to-grave life cycle management of the Army’s entire Black Hawk fleet, the largest helicopter fleet in the world. His office also manages the UH-72A Lakota helicopter, which recently became the Army’s newest training helicopter under the Army Restructure Initiative.

The product office for Common Engines, which includes the T700 family of turbine engines and the Improved Turbine Engine Program – Army aviation’s top modernization priority program – falls under the direction of Utility Helicopters Project Office. The ITEP will enable the Army’s attack and utility helicopter fleet to fly faster, farther, at higher altitudes and enable the Army to carry more troops during missions.

“We do a lot of things, but one of the things in which we excel is to prepare leaders to take the place of our outgoing leadership,” Brig. Gen. Bob Marion, program executive officer for aviation who presided over the ceremony, said.

Marion praised Todd for his dedication in molding leaders of the future. “Thomas has done an outstanding job at leading, developing and coaching. His contributions have really been immeasurable.”

In terms of breadth, Marion said that PM Utility Helicopters “is probably the single largest PM with the most number of complex, big programs of any PMs within the Army.” The Utility Helicopters Project Office is charged to manage several Acquisition Category I programs, meaning they are major defense acquisition programs worth more than $480 million in research, development, test and evaluation and more than $2.79 billion in procurement dollars, requiring Department of Defense oversight.

“It’s so vast that we’ve actually taken ITEP and put that into a new office, transition it out of S&T (science and technology) and into a period of time when we’re going to be developing a new PM,” Marion said.

Todd credited the Utility Helicopters team for the milestones they achieved during his tenure. “The most precious tool we have is people … and industry is part of that,” he said. He credited the organization’s industry partners who, at the time when it was needed most, worked with the Army to align the organization in order to continue delivering capability to the war fighter during a fiscal downturn.

“You really can’t get it done by yourself. And if we get moving together in the right direction and do it in a concerted, unified effort, there is nothing we can’t accomplish,” Todd added.

Most of all, Todd thanked his family, especially his wife Tracy for her support and understanding throughout the years, especially during long separations. Tracy is a physical therapist in downtown Huntsville and leads the physical therapy team and the amputee team for military veterans. “A lot of you didn’t know that because she doesn’t brag about it. She does it for those veterans, for her mission in life. This is what gives her joy and fills the void that money can’t fill.”

Todd received the Legion of Merit first oak leaf cluster and the Honorable Order of St. Michael silver award during the ceremony. His wife Tracy was recognized with the Soaring Eagle certificate from PEO Aviation.

Jackson, a Georgia native, remarked that the new job feels just like a promotion. “To me this is a dream come true,” he said. “I would have done any job the Army asked me to do, but I wanted to come back and do this job. It means much more to me than these birds on my shoulders. It means a lot because I’m coming back to family.”

Jackson thanked Todd for allowing him to lead when he served as the product manager for the UH-60M under him. “You allowed me to lead and helped me whenever I needed it. That’s what helped prepare me to be on this stage today.”

To the workforce, Jackson pledged his respect and dignity for their dedication to the Soldier. “I’ll ask you to work hard, and we will have fun. And I’ll give you 120 percent.”