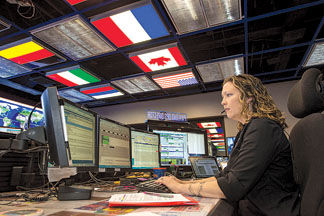 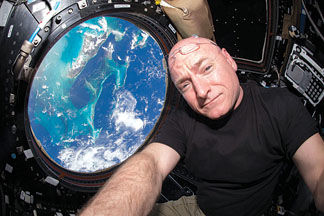 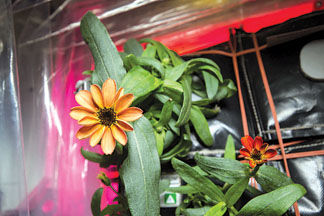 When it comes to making a world of difference through engineering, the sky is not the limit.

Mission Control at Johnson Space Flight Center in Houston may get all the fame and glory – “Houston, we’ve had a problem” is a perfect case in point – but it’s Huntsville’s own Payload Operations Integration Center at Marshall Space Flight Center that’s making a difference every day not only in space, but here on earth, as the POIC team operates all the science experiments that NASA conducts on board the International Space Station.

And much like the conductor of an orchestra, responsibility for overseeing that team and the experiments they manage falls to Stephanie Buskirk Dudley, one of approximately 25 payload operations directors, whether those experiments involve growing zinnias, burning textiles or studying muscular dystrophy.

“Every day we learn something,” Buskirk Dudley said of the approximately 1,700 experiments the POIC has overseen since it began 24/7, 365 days a year operations 15 years ago. “I know that muscular dystrophy is not going to be cured today, just like any other experiment it has to go through peer review cycles. In two or three years, we don’t know what we’re going to learn, what those results are going to be. You just never know what shift it’s going to be that’s going to be the breakthrough.”

The POIC, American Astronaut Scott Kelly and Russian Cosmonaut Mikhail Kornienko, are about to wrap up the One-Year Mission, which is studying the impact of long-term time spent in space on the human body. Come March, Kelly and Kornienko will have spent about 350 days in space continuously. The data collected through the mission on weightlessness, isolation, radiation and stress, will be used as NASA sets its sights on Mars – of which a mission for humans would last about 30 months.

One of the biggest threats to long term space flight is changes to the eye, Buskirk Dudley said. Throughout the course of the mission, the astronauts have taken several eye exams, including some in a lower body negative pressure suit, as well as ultrasounds of the eye and ear pressure tests. All that data is then transmitted to the POIC, as with all the experiments.

“We think that because of the lack of gravity the fluid is collecting and pinching the optic nerve,” Buskirk Dudley said. “We really want to study that more.”

Because Kelly is a twin, NASA has been presented with a unique opportunity to look at genetic markers. Both brothers were given a flu shot in the fall – not because you can catch the flu in space, you can’t, Buskirk Dudley said – but to see how the shot impacted Scott in space and Mark on Earth. Each received the same strain and were given a blood test days later to see if there were any differences in how they were reacting to the vaccine.

“Without the data we’re getting on Scott Kelly and human research, we really can’t go any further than we are now with humans,” Buskirk Dudley said. “We’re kind of stuck in Low Earth Orbit.”

All of the data collected, not only through the One-Year Mission, but other experiments operated on board the station as well, is a stepping stone in allowing man to travel to Mars.

With a Bachelor of Science degree in engineering science, Master of Science in biomedical engineering and a Master of Engineering in industrial and systems engineering from the University of Florida, coming to work for NASA was a natural fit for the girl who grew up near Kennedy Space Center in Florida.

“I grew up stepping out into my backyard and watching space launches,” Buskirk Dudley said. “It was always normal for me. I went to Christa McAuliffe Elementary School. I grew tomato seeds that flew in space. It was always just a part of my life. But I never expected to go work at Kennedy. It was something that wasn’t planned and wasn’t really directly related to my education, but it was like home for me. I’ve always been really passionate about NASA and exploration and science.”

“I thought, ‘Rockets are way easier than people.’ Because people adapt and grow. Rockets are just rockets. No big deal,’” Buskirk Dudley said with a laugh.

Buskirk Dudley spent five and a half years working at Kennedy before coming to Marshall in 2008 to join the Payload Operations Integration Center. Most people who go to work in the POIC – whether they be operations controllers, payload rack officers, data management coordinators, increment science representatives or timeline change officers – have a background in a STEM (science, technology engineering and mathematics) related field, although a few communications majors have found their way to the role of payload communications managers.

Regardless of degree or experience, before they can even work in the room, POIC team members go through extensive training that takes at least a year, sometimes more, in order to ensure they are properly prepared to help manage every minute that an experiment is happening in space. Not all experiments require the ISS crew to perform, some are controlled entirely from the ground at Marshall. No matter who is working the science, every minute on the ISS is accounted for, another responsibility of the POIC – the plan for today in space was literally started 12 months in advance, and calculated down to five minute intervals.

“I’m so proud,” Buskirk Dudley said of her work. “It’s just amazing. You go into the day with a plan, and it almost never goes according to plan. Some days you just get so far off the plan. But at the end of the day you always have figured out a way to salvage the day. You’ve accomplished something. I always leave with a sense of accomplishment, even if it didn’t go the way I expected it to go.”