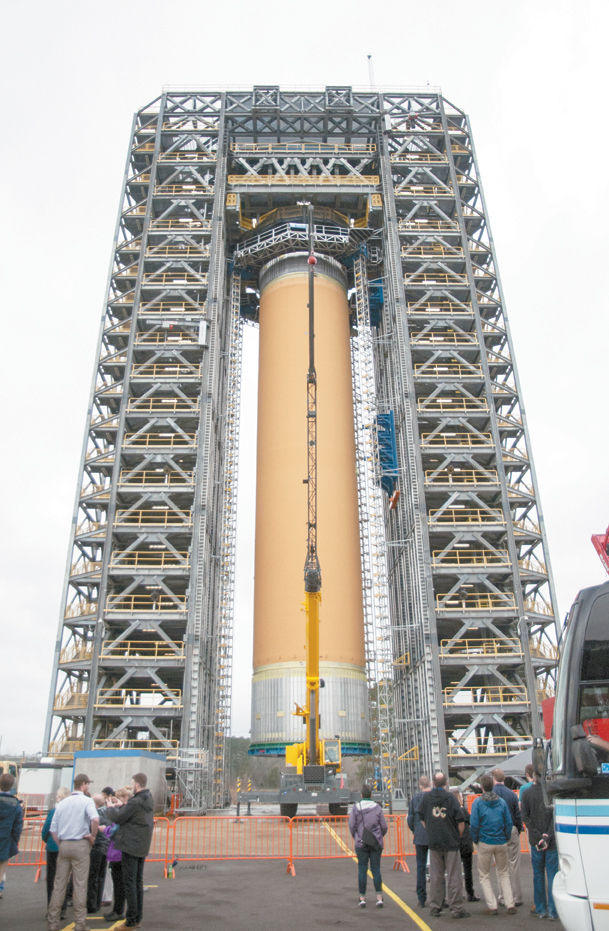 Members of a NASA-led tour group look up at the 215-foot-tall Structural Test Stand 4693, Feb. 6, 2019, which now houses the Space Launch System's liquid-hydrogen fuel tank structural test article, at Marshall Space Flight Center's West Test Area at Redstone Arsenal, Alabama. NASA engineers are gearing up to use the test stand, which the U.S. Army Corps of Engineers' Mobile District completed in November, to put the fuel tank through a battery of structural qualification tests well before the unmanned Exploration Mission 1, scheduled for 2020, which is designed to the be first step in future human exploration of the Moon and Mars. 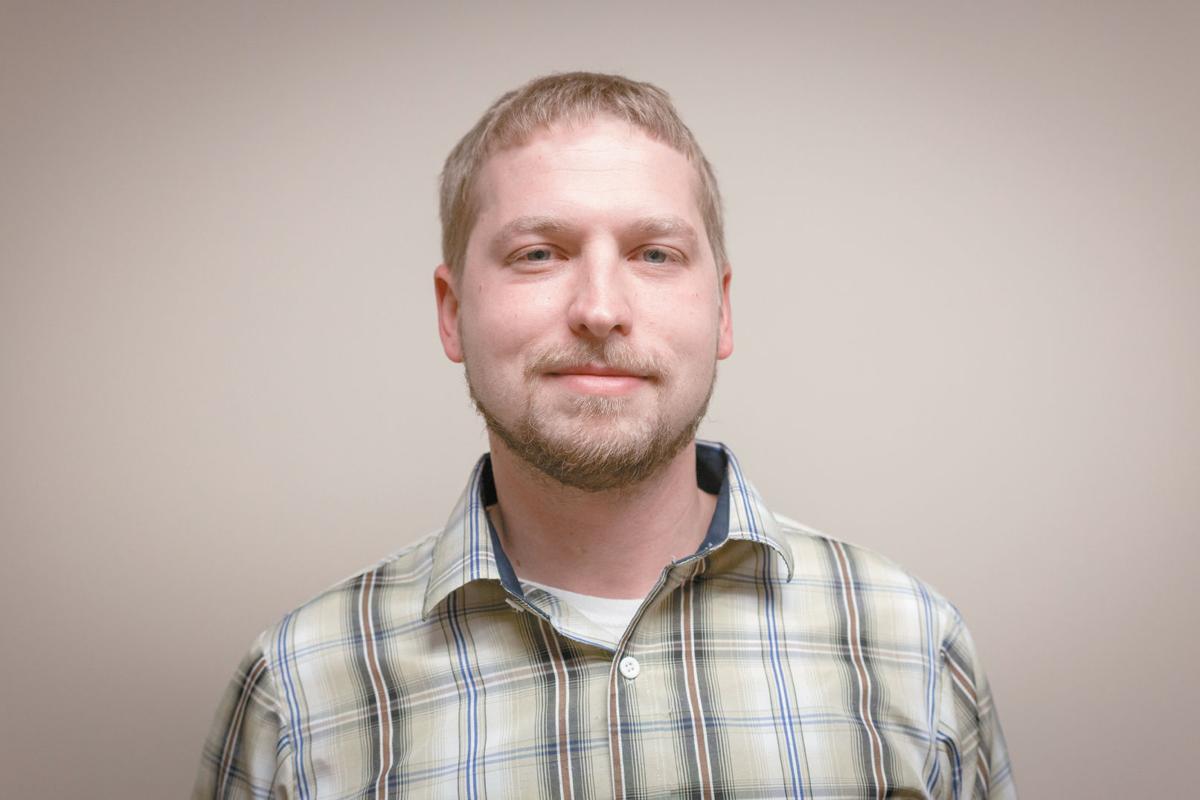 Members of a NASA-led tour group look up at the 215-foot-tall Structural Test Stand 4693, Feb. 6, 2019, which now houses the Space Launch System's liquid-hydrogen fuel tank structural test article, at Marshall Space Flight Center's West Test Area at Redstone Arsenal, Alabama. NASA engineers are gearing up to use the test stand, which the U.S. Army Corps of Engineers' Mobile District completed in November, to put the fuel tank through a battery of structural qualification tests well before the unmanned Exploration Mission 1, scheduled for 2020, which is designed to the be first step in future human exploration of the Moon and Mars.

When the human race makes it to Mars, it can thank Kristoffer Leatherman.

Leatherman is a civil engineer who works at the Garrison Headquarters on Redstone Arsenal.

He’s the guy that makes sure the big stuff like the Space Launch System’s liquid-hydrogen fuel tank can make it to the test stand on post.

Well, that’s just one example of what he does.

And, you could say, if that big stuff doesn’t make it through the Arsenal, it doesn’t get tested, and nobody goes to Mars.

Maybe that’s a bit of an overstatement, but if it is, it’s an overstatement that highlights the thousands of small acts, unsung heroes, and unthought-of details that don’t get enough attention when it comes to accomplishing big things.

Leatherman is a project manager now, but one of the first big projects he worked on was helping NASA navigate the roads on post with their specialized equipment.

“Basically, we had to start at the dock down at the river and make sure the large heavy moving equipment they were using to transport their test articles could make it to their test stands,” he said. “We had to evaluate the road widths, the bridge structures, the geometry of the roads, and the hills to make sure they could even get up there.”

Leatherman is not talking about making sure a semi-truck with a wide load can make it.

For example, the SLS liquid-hydrogen fuel tank is more than 200 feet tall and has a diameter of about 28 feet. It’s the largest piece of hardware on the new deep-space rocket.

To put that in perspective, the average double-wide trailer you see being escorted down Interstate 65 is usually transported in two sections, which measures about 20-30 feet wide and 40-60 feet long, depending on how it’s split.

The fuel tank doesn’t split in half.

“(NASA) had two different mobile platforms that had 12 axels on them. And, you’d have one in the front and one in the back with this giant cylinder between them,” Leatherman said.

“Each one of those could independently turn, raise up, and tilt.

“So, they had to make sure that as they were driving this thing around these curves and hills that they weren’t going to max out the limits on their equipment and end up physically breaking something.”

After getting the specs on what the equipment could do, engineers then had to do the math and figure out how to get it from point A to B.

In the end, Leatherman said it took some significant construction to mold the roads into pathways that could handle the machine.

“That was really interesting for me because this is the stuff they are going to use to potentially go to Mars,” he said. “So, this was my little contribution to it.”

That was early in Leatherman’s career. Now, as a project manager, he’s more focused on the upcoming construction that’s taking place as the Arsenal grows.

“Just making all of that happen. It is pretty involved and interesting,” he said. “I feel like that was a high level of work we accomplished.

“I guess you could say the same thing about working with NASA, just taking two so drastically different government organizations and cutting through the red tape to make those projects happen is rewarding.”

Civil engineering is different for Leatherman compared to other disciplines. It’s not that one is better than the other; he just likes how being a civil engineer allows him to make large visible changes that can be seen every day.

“You see a piece of land, and you think, how can we make this more efficient?” he said. “And, if you can get the idea out of your head and onto paper, to where somebody else can take it, pick it up and build it.

“Then you go through the whole process of finding all the money and support to do it and making it happen. You’ve got this huge end result.”

It’s the huge end results that leave a lasting impact, regardless of how many little steps are needed along the way.