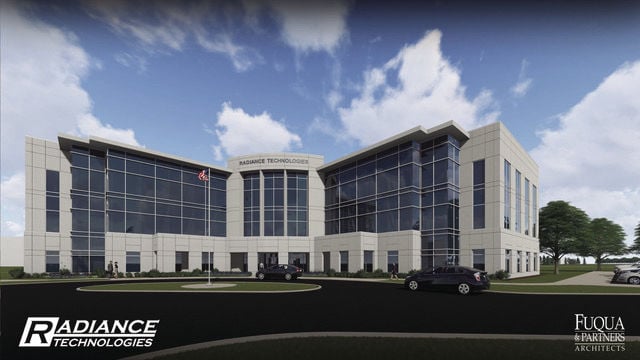 Radiance Technologies executives are proud to celebrate 20 years as an employee-owned business, but the Huntsville company is mostly looking forward with big plans for the future as a leader in cybersecurity, intelligence and engineering.

“It has been interesting to see how much Huntsville and Redstone Arsenal has grown over the last 20 years,” Radiance Technologies President David Diaddario said. “We are excited to be a part of where the next 20 years will take this community and the technology that will take us there.”

By the end of the year, Radiance Technologies plans to occupy its new corporate headquarters under construction in Huntsville’s Cummings Research Park West, as it prepares to continue the company’s growth as a leading defense and intelligence prime contractor.

Another new facility is also under construction at the company’s site in Beavercreek-Dayton, Ohio.

It’s an appropriate end to the year that marks the 20th year in business for the employee-owned business, Diaddario said. It’s also part of a plan for continued growth that will make it possible for Radiance to move into the “large” business status for federal contracting opportunities, he said.

Radiance Technologies was founded in 1999 with three men who used folding card tables and chairs for office furniture, and a subcontract supporting the U.S. Army Space and Missile Defense Command.

The founders, George Clark, John Dennis and Scott Dublin launched operations in a 3,000 square foot facility in Executive Plaza. By the end of the first year, Radiance grew to 11 employees, achieved $1.2 million in revenue, and outgrew its first office space. At the end of five years in 2003, Radiance had 117 employees and more than $17 million in revenue. The operation moved to Wynn Drive, opening a three building assembly, integration and manufacturing complex on Commercial Drive. By this time, the company had personnel in six states and two foreign countries.

Fast forward to 2015. Revenue was approximately $117 million and Radiance had more than 500 employees for the first time working in corporate facilities in nine states, project offices in 14 states and one foreign country.

Diaddario said the company grows each year. Revenue for 2018 was approximately $180.7 million and Radiance now has more than 850 employees.

“The company’s phenomenal growth and success we have enjoyed are directly attributable to our employees, which are still our most important asset,” Diaddario said.

The new headquarters in Huntsville will be at 310 Bob Heath Drive and features more than 100,000 square feet, Diaddario said. It will include secure high bay space, multiple classified and unclassified labs, and an advanced conference center with seating for more than 200 guests.

Just like Redstone Arsenal is an integral location for Radiance in Huntsville, Diaddario said the Wright-Patterson Air Force Base in the Dayton, Ohio region has been a strategic growth area for Radiance.

Both new sites should be operational before the end of the year, providing increased capacity and capabilities for Radiance to address the needs of the Department of Defense, national intelligence community, and other government agency customers.