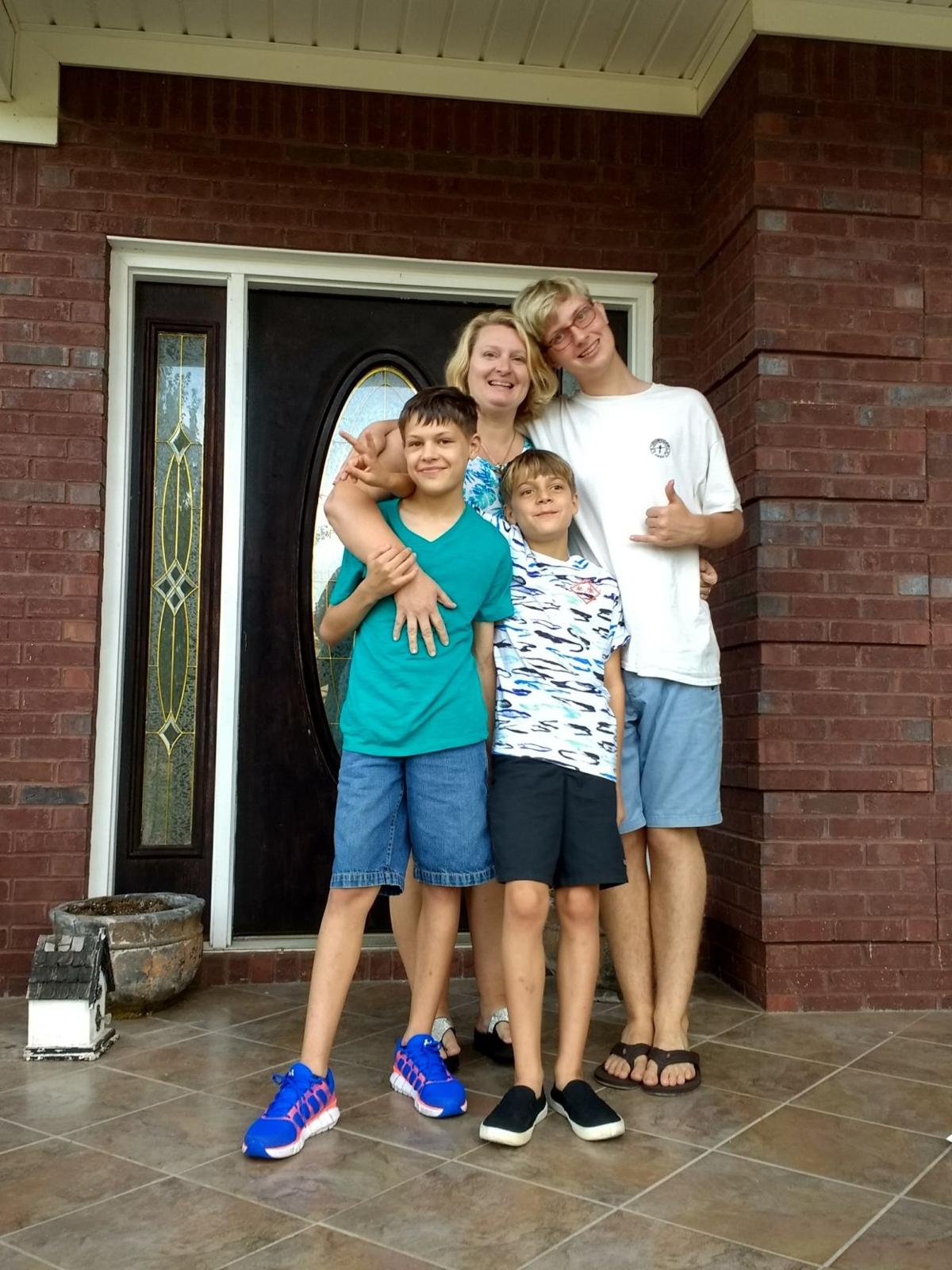 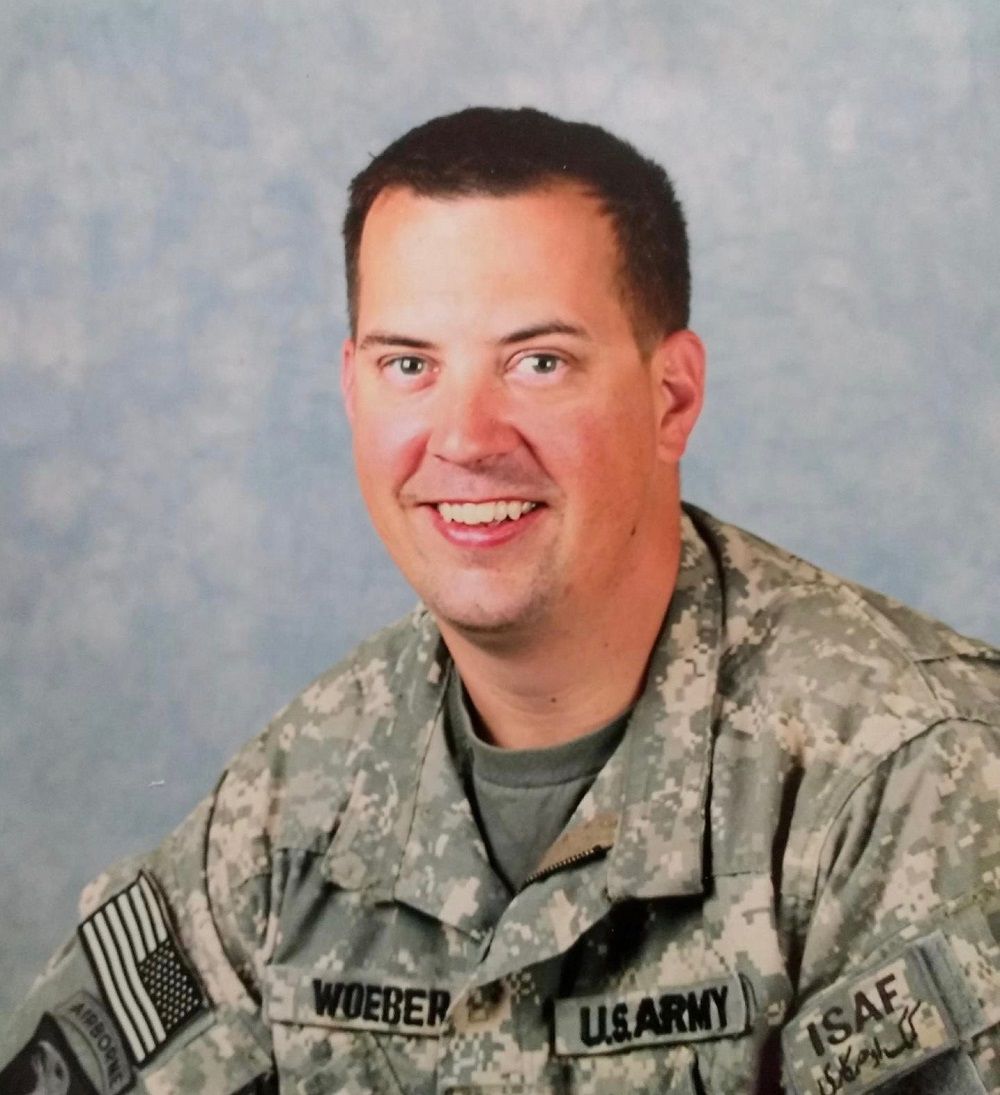 Their names are Lori, Jacob, Nathan, Owen, Jim, Debbie and Mindy. They live in Madison and Decatur, and they’re the immediate family of fallen warrior Brian Woeber, who died in a 2017 UH-60 Black Hawk helicopter crash in the Pacific Ocean.

The surviving family will be among those honored at the 2019 Veterans Day Breakfast on Monday, Nov. 11, at the Roundhouse in Huntsville. This is a holiday event for Redstone Arsenal, the cities of Huntsville and Madison, and Madison County.

Lori Woeber is Brian’s widow and now single parent of their three sons ranging in age from 11 to 17. Jim and Debbie Woeber are the parents of Brian and Mindy W. Parker.

It’s been a little more than two years since Brian’s death.

“We are still struggling along with his widow,” Debbie said. “There’s just a big hole in the family.”

Each family member has his or her way of coping, but they all try to remain focused on what Brian’s life and service to the U.S. military meant to him. Caring for his family; and teaching others how to be the best were his strong suits.

“He’s always been a go-getter,” Jim said of his son. “When he wanted something he went after it.”

When he was a kid it was karate, earning his black belt – and then becoming an instructor.

He was a volunteer who didn’t mind taking on the dirty jobs on mission trips, like installing insulation in attics. In high school, he lettered in cross country running and tennis.

“Brian was not a natural athlete,” his mother said. “The accomplishments he made were because he worked hard for them.”

After two years at the University of Alabama, Brian wanted more purpose in his life so he joined the Marine Corps Reserves. He participated in burial details, Toys for Tots, and ran the Young Marines Mini Boot Camp program for troubled teens.

“He believed in training,” his dad said. “While he was in the reserves … he realized he needed to finish his education.”

In 1999, he met Lori and their relationship led to marriage. On the career side, Brian set his sights on flight school.

“I think he loved the Marine Corps but he had always wanted to fly … but at age 27, basically he was too old to make it in the Marines,” Jim recalled. That didn’t stop Brian. He talked to the Army about a path to flight school and that’s when he went to Warrant Office School."

His first assignment was three years in Korea. Then he spent three years in Germany with a medevac unit. Then he was deployed to Afghanistan and flew the Dustoff Medics assigned to Camp Leatherneck, the home of most U.S. Marine operations in Afghanistan.

“He flew into combat zones to pick up injured Soldiers,” Jim said.

When he completed the mission in Afghanistan, Brian headed to Fort Rucker where he became an instructor pilot. Then he completed another tour in Sinai, Egypt, assigned to a multinational unit in another hot zone, his father added.

“It was a regular thing for them to try to storm the gates and shoot at them while he was in Sinai,” Jim said.

From there, Brian and Lori were assigned to Wheeler Air Base in Hawaii in 2015.

“He was living the dream flying in Hawaii and he just loved it,” Jim said. “He was an instructor and used to break in the new commanders.”

One of those commanders spoke to Jim at Brian’s memorial service to tell him about the impact Brian had on him.

Soldiers who worked with Brian shared story after story about how Brian built them up so they could realize their potential, Debbie said.

“One told me Brian had an uncanny ability to find out weaknesses; and everyone who talked to us said Brian made them a better pilot,” Jim added.

On the personal side, Brian was a devoted family man. He loved his wife and sons and spent quality time with them when he wasn’t deployed. To say his wife is busy is an understatement, Debbie said. She’s doing everything she can to raise the boys as a single parent. It’s a hard job, she added.

Brian and sister Mindy were born 364 days apart. Growing up the pair were close and Mindy loved the one day a year she and Brian were the same age, Debbie said. Brian made sure he made it home from Hawaii for her wedding in November 2016.

Then he made more cross country trips to be with his family in January, March and May in 2017 because of the deaths of his paternal grandmother and both maternal grandparents. His death was just months later.

“2017 was a rough year for us but Brian was the headliner,” Debbie said. “You’re prepared to lose your parents and for us they were all in their 90s. But you are never prepared to lose a child.”

It’s hard and it hurts, but the parents say talking about Brian helps. They find comfort in their memories.

“Really one of my fondest memories is when Brian was in Hawaii, he would always call during the halftime of every Alabama football game. He loved Alabama football as I do,” Jim said. “We’d discuss the first half of the game and then end up spending the second half talking on the phone and watching the game together.”

Debbie said sometimes she got to say hello, but that was a special call for father and son.

On Aug. 15, 2017, Brian, 41, was among five Soldiers who died during a nighttime training exercise. An investigation report revealed the pilots of the craft became disoriented during the exercise, leading to the crash.

Jim and Debbie said there’s some comfort knowing Brian died doing something he loved – serving his country, flying in Hawaii and training other pilots.

While it’s been a little more than two years, it often feels like Brian’s death happened yesterday.

“Our faith and many prayers have gotten us through,” Debbie said. “Continued prayers are appreciated.”