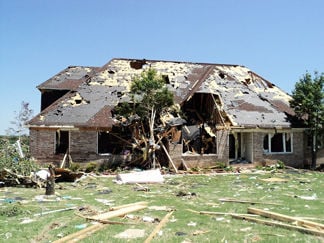 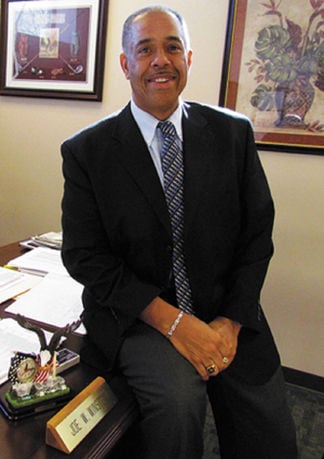 Joe Winston, who retired in January 2013 as the Garrison’s director of human resources, will never forget April 27, 2011. That day he lost his home and nearly lost his family.

Weather forecasts from midmorning through late evening called for hail, strong winds and possible tornadoes all the way from South Alabama through North Alabama. Winston was at work in Garrison headquarters building 4488. As the tornado warnings continued, Winston along with other Garrison employees in 4488 went to their respective safety locations on the first floor of building 4488. Finally, out of concern for his family, Winston left for home about 2 p.m. He lived in the Anderson Hills subdivision at 117 Maverick Drive in Harvest.About 15 minutes into his drive home northbound on Rideout Road, Winston had a fearsome view through his windshield.

“I could actually see the tornado as it traveled across the Harvest area/my community and Highway 53, destroying the Piggly Wiggly Store, gas station and other structures,” he said. “It was a huge black cloud, with lightning, twirling with all sorts of debris on the ground and in the air.”

He drove around and across debris in an effort to get to his residence. When he finally got to the intersection at Anderson Hills, he saw downed trees blocking part of the roadway and alongside the road as well. Neighbors’ houses were destroyed and there were ruptured gas lines.

“Total destruction,” Winston said of what he saw when he arrived home. “The roof was blown off of it. All the front was gone. My wife and son’s vehicle was in the driveway and torn to pieces. A solid two-by board was driven through the sidewall of the right rear tire.”

He walked over fallen bricks, glass, timbers and the downed trees in his yard. He entered what was left of his home and hoped his wife and their then 16-year-old son were still alive.

“I finally found them in the basement with cuts and bruises,” Winston said. His wife, Veronica, a supervisory logistics manager at Redstone, later required medical attention at Huntsville Hospital. Their son, Joseph, now 21, had also survived the EF5 tornado with minor cuts and bruises.

The house at 117 Maverick Drive was never rebuilt, leaving an empty lot where the family used to live. They stayed for a couple of days with Veronica Winston’s sister and her husband. From there they moved to a hotel on Redstone Arsenal and then to officers’ quarters on post for about two months. The Winstons lived for about a month in a rental home in Madison until they finally bought a house in Madison in July 2011 where they currently reside.

“Number one, give God the glory; we are blessed to have sustained an EF5 tornado. The outpouring support from friends, family, Redstone and people we never met before was very much appreciated, and will always be remembered,” Winston, originally from LaGrange, Georgia, said. “I’d advise anyone that lives in Tornado Alley, as they call it, to invest in a storm shelter; although at the time all we had was a basement but now we have a storm shelter just in case.