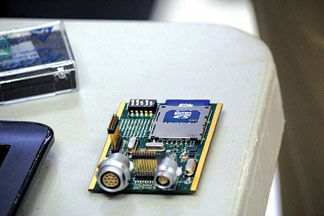 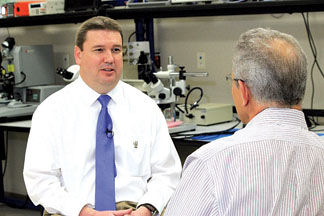 Redstone Test Center’s mission to support the warfighter is accomplished through many avenues of the testing process, but is centered around the organization’s philosophy and core values, of which people, who represent the organization’s tremendous talent, are at the forefront.

RTC is committed to not only the professional development of its employees, but to being a career advocate as well, recognizing that some team members aspire to the traditional career progression of management positions, while others desire to be experts in their technical field.

RTC has identified three specific career paths for engineering personnel that all begin with core test and evaluation fundamentals. While personnel may shift between career paths as opportunities become available, the three paths are typically distinguished by mission needs and the individual’s desire and knowledge, skills and abilities.

One of those career paths is the experimental developer path. This career path is for individuals who possess strong technical specialties with a demonstrated ability to be innovative, and a desire to develop state-of-the-art test technologies, develop new test methodologies and become DOD experts in their technical field.

“As an organization, we remain focused on moving forward by better optimizing how we operate, increasing effectiveness and efficiency, and delivering for our customers. While those efforts are critical to our continued success, at our core, we are a technical organization where engineering prowess, precision, and detailed analysis and reporting are fundamental,” said RTC Commander Col. Patrick Mason.

In an organization where most people are highly technically inclined, there is one very small population that sheds light on just how technically specialized one can become. Out of the approximately 1,200 people employed at Redstone Test Center, only four individuals fall into this category. RTC has three experimental developers and one senior experimental developer.

EDs are encouraged to pursue advanced degrees in their test technology area. They are recognized as experts in their field and often invited to present at conferences, publish in peer reviewed journals and pursue patents on their technology and methodology innovations. EDs have yearly reviews with the Command staff at which they present their accomplishments from the previous year and both one and five year goals.

There are currently four areas of specialization for an ED:

As an example of this career specialization, one RTC ED was recently interviewed by WHNT’s Steve Johnson for his weekly technology and defense coverage, which airs on Fridays. Scott Wolfson, RTC ED in Advanced Instrumentation or Miniaturization, spends his days in the lab working to reduce the size of Data Acquisition Systems. These data collectors are attached to most missiles, aircrafts or other deployable agents for the gathering of information on functionality during testing and during deployment.

The current custom data collection technology being used on Army equipment is a fourth the size of the previous generation of custom instrumentation. The near term goal is to reduce even further by 50 percent. As with any system instrumentation, size and weight have an effect on test article performance, therefore, any size/weight reductions produce improved test results and superior equipment for the warfighter.

“As military technology advances, the test and evaluation community is constantly maturing and adapting methodologies and test technologies. As an experimental developer, I’m responsible for pushing the envelope in advanced instrumentation technology and doing my part to ensure our warfighter has equipment that reliably and effectively performs its intended mission,” said Wolfson.