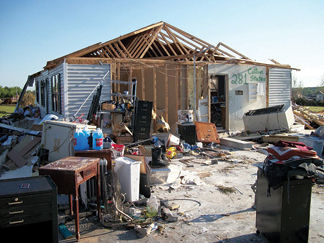 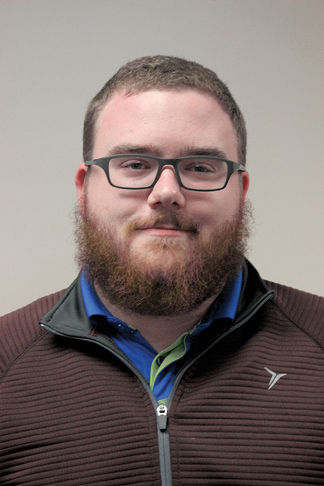 April 27, 2011, seemed like just another day at Redstone and throughout the Tennessee Valley. But this spring day would be different.

Massive tornadoes swept through Alabama that day, bringing death and destruction and causing widespread power outages that lingered for days.

James Mazikowski, now the Garrison’s webmaster in Public Affairs, was working at that time for a defense contractor in Huntsville. Like most Tennessee Valley residents, he heard about the expected bad weather that morning from the local news stations. By afternoon a tornado warning was issued and Mazikowski and many other workers were sent home early.

On the way home to his one-story wood house on Ginnery Row in Toney, Mazikowski stopped at a local fast-food restaurant and bought carryout for dinner. He went home to his family and watched the television newscast about the severe weather and tornado damage from Birmingham and other areas of Alabama.

“And the sirens started going off here,” he recalled. It was still daylight, about 5 p.m., and he and his family went outside to watch the weather.

“It wasn’t raining. You could hear the wind blowing through the trees,” Mazikowski said. “We saw stuff kind of sprinkling down, like leaves. Then more stuff started falling, like leaves, sticks, that sort of thing. We looked kind of around the corner of the house and saw a wall of dark clouds. And we thought, OK maybe we need to go inside.”

A tornado was about a mile or two away from his home and headed his way. The family took cover in a bathroom at the center of the house in the hallway. They heard sticks and other debris hitting the house. There was a monitor camera mounted atop of the corner of the garage. Mazikowski saw the camera get whipped around and snatched away by the force of the wind; and then the monitor went blank.

Mazikowski could feel the wind hit the house. “It was strong, there was a whole lot of wind and debris hitting the house,” he said. “A couple of minutes at the most, it all went really quick.”

They opened the bathroom door and looked out. They could see light shining inside their home, a sure sign that pieces of their home were missing. In the dining room, a large section of roof was gone. Items were in disarray. Windows were shattered. Dry wall from the ceiling had collapsed onto everything. The entire garage was gone. But a half-full paper cup from the fast-food dinner Mazikowski had brought home was still sitting on the kitchen counter like nothing had happened.

The home’s four occupants, along with their dog, were able to salvage most of their belongings. But the house was destroyed.

“The house was actually moved about 15 feet off the foundation. Because it was on a crawl space and the entire house was just shifted,” Mazikowski said.

He and his family moved temporarily to his late grandmother’s house. After a few months, their new home was rebuilt on the former site in Toney and they moved there in December 2011.

“Living here all my life I kind of got used to seeing the tornado warnings and hearing the warnings and preparing (to take cover during severe weather). But over the years nothing had happened but close calls, so I guess I like a lot of people here had gotten desensitized to it,” Mazikowski, 25, said.

But his mindset changed after losing his home to one of the EF5 tornadoes that swept through Alabama on April 27, 2011.

“I still get leery when it comes to any sort of severe weather,” he said. “Any strong winds or heavy storm cells kind of weird me out.”