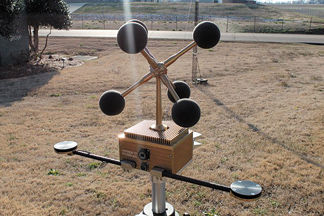 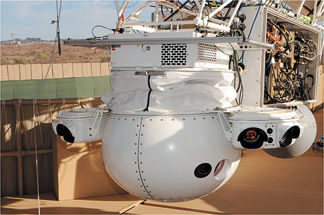 Two government-developed sensors are working together to increase the security of deployed Soldiers.

The Firefly and Serenity sensors employ government developed algorithms, software and hardware to locate hostile fire around a base.

The technology, a joint effort between the Aviation and Missile Research Development and Engineering Center and the Army Research Lab, has been under development for more than a decade.

The Serenity payload, developed jointly by AMRDEC and ARL, has been deployed to theater in the Middle East with additional deployments planned for other areas of the world.

The Serenity payload includes the FireFly acoustic sensor coupled with an electro optical array of cameras, according to Lamar Auman, AMRDEC associate director for modeling and simulation.

Serenity’s net-centric autonomous cueing capability can be used to direct the PTDS payload sensor to a specific location or focus the attention of a CWS operator to a potential threat. This capability greatly increases the probability of hostile threat detection and allows the operator to concentrate on other tasks associated with base defense, Auman added.

The AMRDEC-developed FireFly acoustic/EO sensor can operate jointly with the Serenity or be deployed as a stand-alone unit. FireFly was designed to support small installations, independent of installation power. The cost of the FireFly sensor is small enough that systems are considered disposable if a failure occurs, yet its government owned algorithms are sophisticated enough to group threats into classifications of small arms fire, heavy machine gun or rockets artillery and mortar and geo-locate the threat with a high degree of spatial accuracy.

FireFly is being deployed with the CWS through the Close Combat Weapon Systems Project Office. The Firefly system was initially deployed to Afghanistan in May 2012 to support a fires detection requirement.