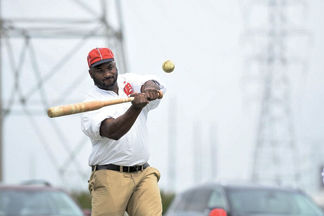 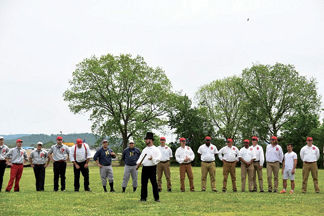 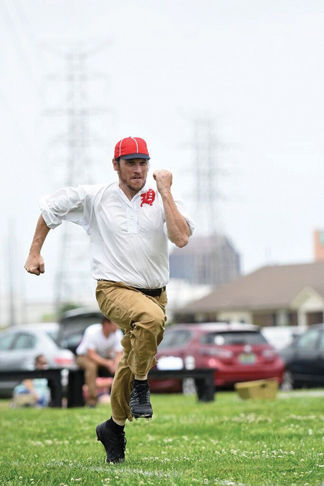 No gloves, no helmets, no scoreboards, just America’s pastime in its purest form.

“It is our inaugural season and it has been a lot of fun,” Talley LaFlamme, Redstone engineer and Huntsville Vintage Base Ball Club board member, said.

When the Huntsville Stars departed for Biloxi, Mississippi, Redstone engineer Guy “Lemon Drop” Kerby saw a void in the community for baseball enthusiasts. A history buff and baseball fan, Kerby came up with the idea of forming a vintage baseball team, using the original rules from the semipro teams formed in the 1860s. Although several other states had established teams, vintage base ball had not yet come to Alabama.

After discussing the idea with co-workers, several of whom he recruited for the team, the Huntsville Vintage Base Ball Club and Huntsville Redcaps team were formed in 2014. From the beginning, they made it a priority to be as authentic as possible, from the rules to the equipment to the uniforms.

“The shirts are actually a pattern from the 1860s called ‘Shirt on the Square,’” said LaFlamme, who handmade each player’s shirt.

Even the choice of field was rooted in history.

“All of the baseball players were from the mills,” said Huntsville Vintage Base Ball Club board member Alisha Durbin, herself dressed in Victorian garb for Saturday’s game. “They weren’t hired to be good at their jobs, they were hired (to play baseball).”

Playing catcher without gear could be daunting but Redstone engineer Jonathan Smith doesn’t crouch behind home plate – which is an actual period-accurate metal plate. He instead stands beside the umpire, as was the custom at the time. While the mechanics of the game have remained the same, playing with 1864 rules means that if a fielder catches a ball on its first bounce, it is still considered an out. There are no balls, and strikes are only called if a player swings and misses.

“You don’t have to be a pro athlete and you don’t see a lot of outstanding plays. It is just for the fun for it,” Redstone engineer Andy “Rabbit” Kochie, team captain for the Redcaps, said.

That might be true, but the spectators Saturday seemed impressed when a player would catch a pop up with their bare hands. Although the balls were handsewn leather with a cork center, they still packed a punch when fired to first to beat a runner. And that runner better stop when they reach the base, because in 1864, there was no overrunning first base.

Although in their first season, the response has been so positive that a second team, the Spinners, is being formed and there are plans for four teams.

The Huntsville Vintage Base Ball Club is a 501(3)(c) nonprofit. With several military veterans on the team, LaFlamme said they plan to use their hobby to give back to the community by donating part of their proceeds to veteran-affiliated charities.

For more information about the Huntsville Vintage Base Ball Club, visit their website at www.huntsvillevintagebaseball.com. The Redcaps’ next game at Lowe Mill is scheduled for May 14 at 12:30 p.m. against the Spinners.